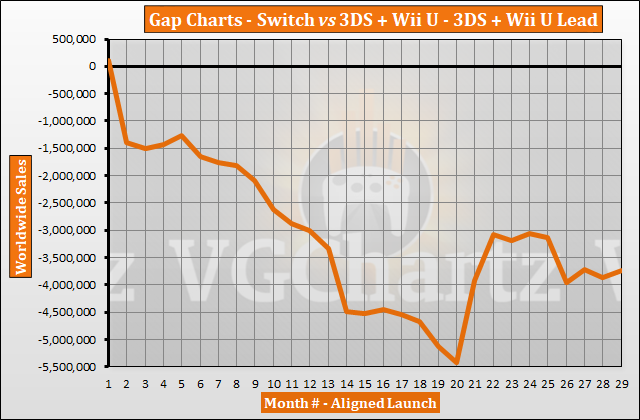 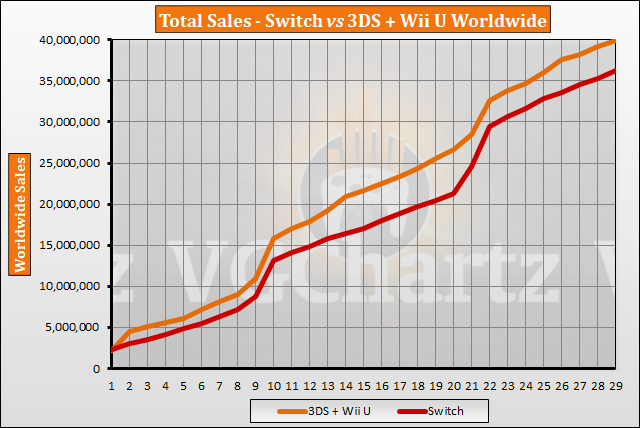 The 3DS launched in February 2011 (however, 3DS sales have been aligned to March 2011, since it only launched at the end of February in Japan), the Wii U launched in November 2012, and the Nintendo Switch launched worldwide in March 2017. The Switch has sold 36.21 million units, while the 3DS and Wii U have sold 39.94 million units during the same timeframe.

The 2DS launches in 3 more months from the 3DS' perspective on this chart. That only netted an additional 9 and a half million or so though, so not a huge impact. Lite will probably be considerably bigger than that.

The Wii U won't be contributing much from this point in the graph on. I can't recall exactly but I think in 2015-2017 it sold all of like 3-4 million

The way I see it Switch is in the lead right now. A good 5-10 million people that bought both a 3DS and a Wii U, now only have to buy a Switch. So considering that, Switch is ahead.

Ah right! Some people own both and thus are counted double on the 3DS+WiiU side, while nearly every Switch sale is going to be to a unique owner. That'll change a bit once the Lite releases, but the same could be said for the New 3DS. Thus far this is essentially one piece of hardware versus 2 or 3, depending on how you count the 3DSXL. And while the 1 piece of Switch hardware will soon increase to 2 with the Lite, the 2 or 3 3DS+WiiU hardware pieces will eventually become much more, as much as 6, depending on how you count the New models and 2DS models, but at the very least 3. Meanwhile the Lite will probably sell largely to a different audience than the main Switch, while the New 3DS was meant to be an upgrade sold to the same audience, so that will increase the 3DS+WiiU's double dipping factor even further.

Catching up, bit by bit. So impressive for the Switch.

It's a basically combination of the two, so it's good that it is keeping pace sales wise with both combined as well.

The handheld market received a hit last-gen with the 3DS, so to see the Switch tracking close to the 3DS + Wii U (even though Wii U was a failure) is slightly more promising. Hopefully, it continues and show strong sales for the Switch ending around 80m - 100m sold.