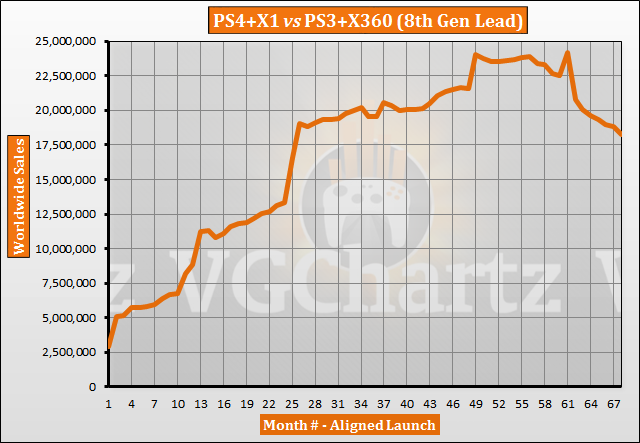 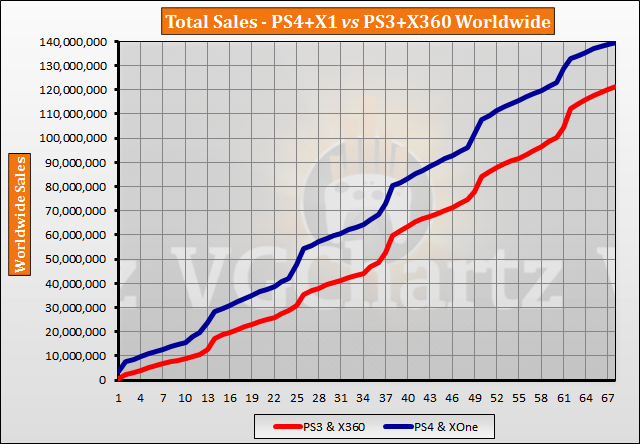 They will end up roughly at the same numbers in the end around ~175M. First 2 years of last gen were slow but they got a very strong tail end.

PS4 + XB1 = 182m minimum. There has been some population growth since generation 6, so the total should actually be higher than PS2 + XB. In generation 7, Sony and Microsoft lost some of their customers to the Wii which explains the lower total.

I don't even nearly believe the sales prediction for this and next year. Even if they would cut the price to $199, they just lost too much steam already 2016 had a pristine holiday season for the PS4, catching up to the previous years again. But even then, it could only reach 17M - and it's already outselling 2019, and the gap grows wider each week.

You're comparing to the PS2 without the context: PS3 was way too expensive for most people early one, so they rather played on the PS2, especially if they didn't have HD TVs yet. And tons of casuals were playing the PS2 just for Singstar and/or Buzz. Neither will likely happen for the launch of the PS5, and thus the sales will drop much faster with the PS4.

yes ps3, was expensive, so will the ps5 be, every rumor sugest 500 to 600$ so there will be a big difference between 600$ and 199$ so many people will buy ps4, not as much as ps5 maybe but still .. (and with PS5 4K tv will be must have so there is much more people with full hd tv now than with 4k tvs) also yes PS2 had many things, and was 99$ that's why I am not saying it will do PS2 levels, (ps2 made 50m after ps3) I am saying around half of that but in no way a few units like ps3 did after ps4 ( about 7m ) that's why I am saying around 15-20M after ps5 launch, which is OK and is something normal and fully possible. As for the price cut, I said it will have effect like 2016 or close to it because the pricecut will be 100$ off the official retail MSRP price now which is 299$, 2016 was only 50$ price cut. and again this is best case scenario with luck and god's help, it may be not this case that's why I did 3 different scenarios. the normal case scenario is 16M, ps4 like it is now without price cut will probably do about 13-14M that's why with the help of 100$ price cut I put it at 16M

P.S. the whole comment got ugly ( the first one ) I originally put it line after line it was structured well, but the site just put it together without any paragraphs or whatever ...

Yeah, you can't make new lines in the first post, that only works for replies. Some technical bug they have to pinpoint and iron out.

You're not saying it will do 50M like the PS2... and then your first scenario is pretty much exactly that. Even your second one is way overblown. Only the third one really makes sense. You also forgot to take the inflation into account. $599 these days is much less hurtful as it was in 2006, and if the release price is $499, then there shouldn't even be a problem anymore.

Btw, the way PS4 sales are going, it will need a price cut just to reach those 14M this year. During the last 10 weeks PS4 lost an average of 66K per week compared to last year. It's lacking it's big releases from last year's September and October ( Spiderman, Tomb Raider, Assassin's Creed and RDR2), so it will bleed sales very fast during that period, doubly so as the Switch will steal it's thunder during that exact period.

As a result, by the end of October, without a pricecut the PS4 would already by behind the last year by the 4M it's allowed for the whole year before even BF or the holiday rush kick in. In other words, it would need a permanent $50 pricecut just to keep up somewhat with last year and reach 14M, and even with a $100 pricecut I don't see the PS4 make 18M anymore like in your best case scenario (though 16M could be possible).

so with the numbers updated I am bidding with 1M more on all my numbers in all of my scenarios! let's see