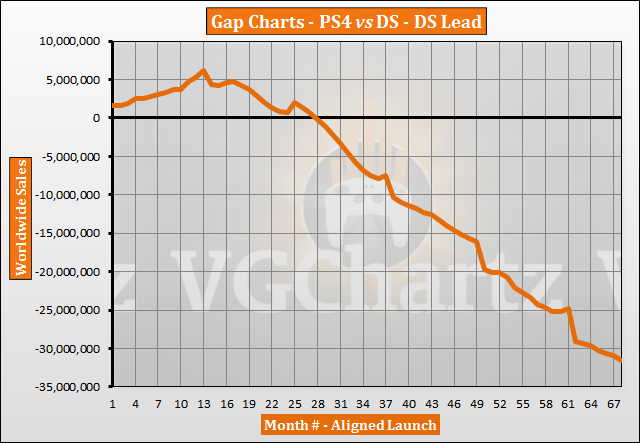 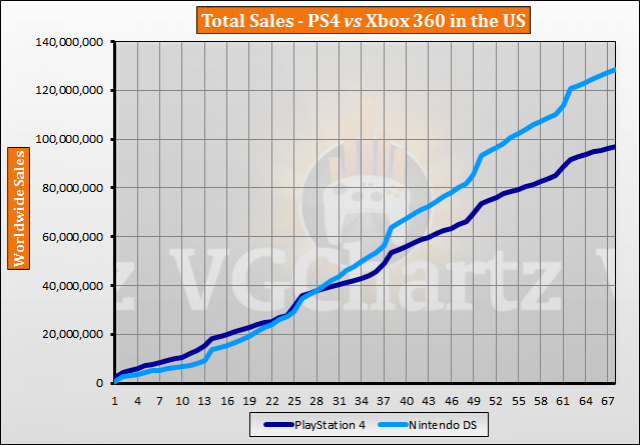 Thanks so much, it's great that you guys are so receptive to our feedback and requests.
Interesting to note that PS4 tracked ahead for the first two years.

The DS has not sold really good at the beginning - it even happened to be a close race between DS and PSP back then. But somewhen a bit later it had changed.

As requested in the comments in the Switch vs DS article here is the PS4 vs DS comparison.

Great graph and super fast response to a user request. I do think that your title for the second graph needs an edit, though.

the second chart is mistaken in the title, it says ps4 vs xbox 360 in US :D

This one's not gonna last long.

also the somewhat chart of ps2 vs ps4 comparison

This is exactly what I thought. The Switch is at the 28 month mark now, and in that comparison the DS recently took over the lead. So very similar.

I wouldn't be too sure of that if I were you. One should expect the Switch to keep pace with the DS going forward.

Unless the switch lite and Pokemon and animal Crossing somehow really light the fire for switch and it explodes. You never know but I hope the switch crosses the PS4 in the end.

Unless the switch lite and Pokemon and animal Crossing somehow really light the fire for switch and it explodes. You never know but I hope the switch crosses the PS4 in the end.

Wow, those holiday spikes are so small, they're almost nonexistant