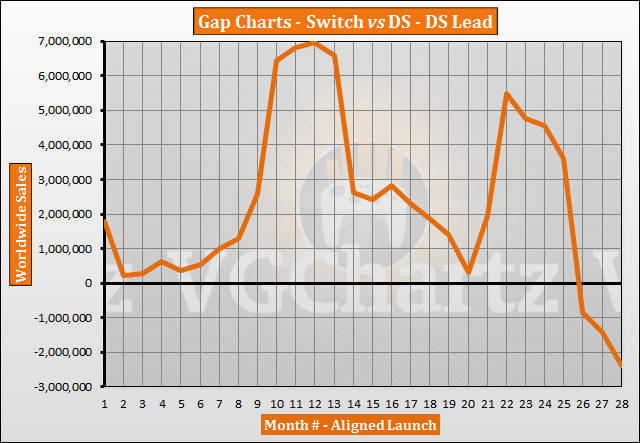 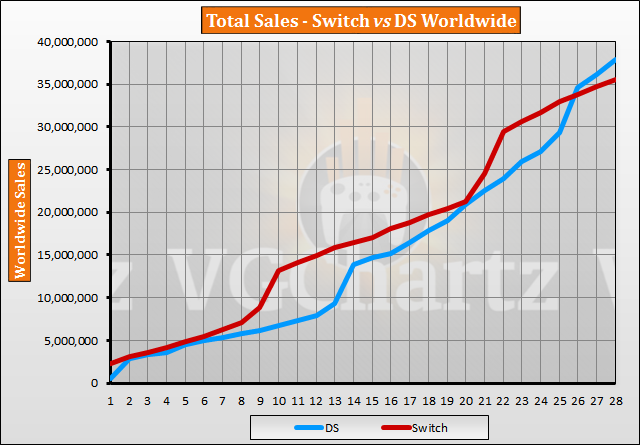 June 2019 is the 28th month that the Nintendo Switch has been available for. During the latest month the gap grew in favor of the DS by 965,822 units when compared to the Switch during the same timeframe. In the last 12 months the DS has outsold the Switch by 5.22 million units. The DS leads by 2.39 million units.

I'd actually like to see that it; it may sound weird on the surface, but as one is the #2 best selling system ever and
the other is tracking to be #3, it'd be cool to see how their curves line up.

it will get to 3rd place for sure, the 3rd place now as I recall was on the gameboy with 118M if I am not mistaken, so within next year PS4 should pass this number or early 2021 at worst

Since you asked for it here is the PS4 vs DS chart http://www.vgchartz.com/article/439629/ps4-vs-dsvgchartz-gap-chartsjune-2019-update/

Interesting that the Switch kept pace with the DS for this long. It will probably pass the DS again around the holidays.

I wouldn't be so sure about that. By then, the DS will have about an 6-8M lead and high monthly sales despite being outside of the holiday season. It might to get past it in December, but that will still be tough and tight.

Switch is about to have an extremely strong 2nd half of the year including a very strong holiday season. I also know the DS is now heading into "rocket mode" on the chart though. I expect more of a criss-crossing between the two systems because of unaligned holidays.

Still, at the time, the baseline of the DS was at over 400k weekly, close to twice what the Switch is pulling. If it can put up enough distance between itself and the Switch the spike during the holidays won't be enough to catch up anymore.