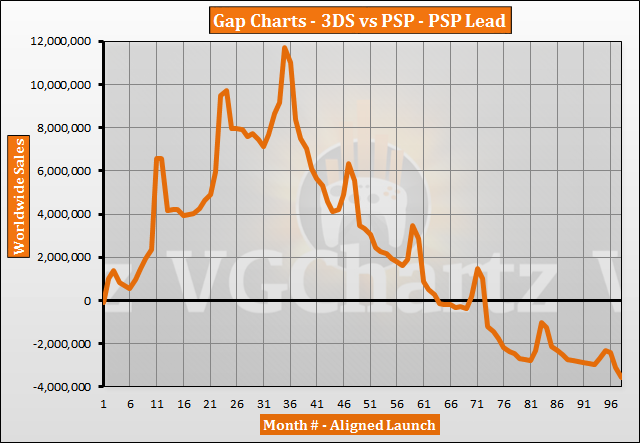 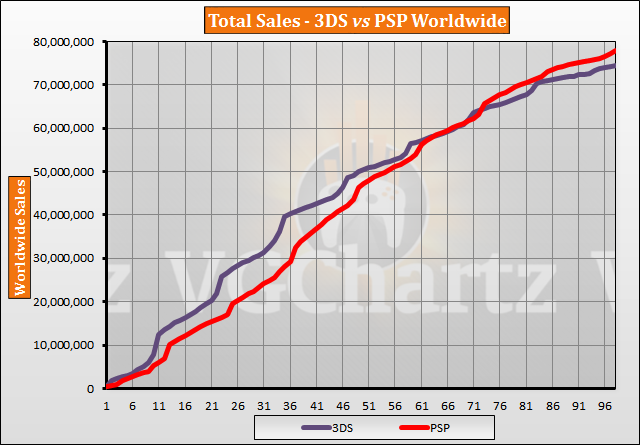 In the latest month the gap grew by 437,082 units in favor of the PSP when compared to the 3DS. In the last 12 months the PSP has increased its lead by 1.24 million units. The PSP currently leads by 3.56 million units.

what happened to PS4&XB1 vs PS3&360 chart ? you haven't update it since december

Shouldn't this get adjusted, now that we know that the PSP actually sold 4M less than we had on the site?

It's a slippery slope since that 76.4 million figure that Sony has for the PSP is as of March 31st, 2012 - Over 7 years ago.
It's not too unreasonable to believe that the PSP could sell an additional 4 million units within that time frame, especially since the Vita had barely launched at the time and wasn't catching any fire any time soon (or ever). But, since Sony never updated the PSP beyond that point, we don't really know. All we know is that the PSP didn't just magically disappear off the shelves on April 1st, 2012 and were never sold again since. They had to keep selling them, Sony just refused to update the figure. It's like what Microsoft is doing with the Xbox One.

About three years ago a Sony representative let it slip in an interview that the PSP sold ~82m during its lifetime, because he forgot for a moment that that would allow people to calculate Vita LTD sales at that time.

In the fiscal year ending March 31st 2013, the PSP and Vita combined for shipments of ~7m units of which about half came from the PSP. Probably even more than half, because the very last official figure that Sony provided for the Vita were 400k shipped during the quarter April to June 2012, so for that quarter it was confirmed that the PSP shipped notably more units than the Vita.

With the above information you can derive from the first link that the PSP shipped 5m units in the fiscal year ending March 31st 2012 while the PSV shipped 1.8m units. That ratio obviously shifted more in PSV's favor in the fiscal year ending March 31st 2013, but the PSP decline seems to have been on the soft side when it still managed to ship 1m units in the first quarter of the fiscal year alone. I estimate that it's roughly a 50/50 split of the 7.0m between the two handhelds, but there's no definitive answer which one sold better. The Vita was certainly able to gain ground in the holiday quarter because it was much harder pushed than the PSP at that point.

That was clear since quite some time. Heck, three years ago the consensus had shifted towards the 3DS not even passing 70m because its pace slowed down so much in year 4 and 5.

The 3DS's life had huge swings. Originally expected to sell more than 100m units, eventually excepted to fall short of 70m. In relation to 70m it ended up doing better than expected, but overall it has to be said that its performance disappointed for most of its life. It had six versions, the most of any Nintendo handheld, but still ended up with the lowest lifetime sales.