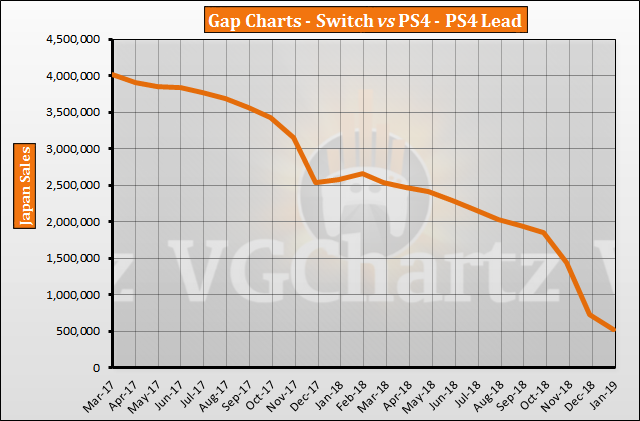 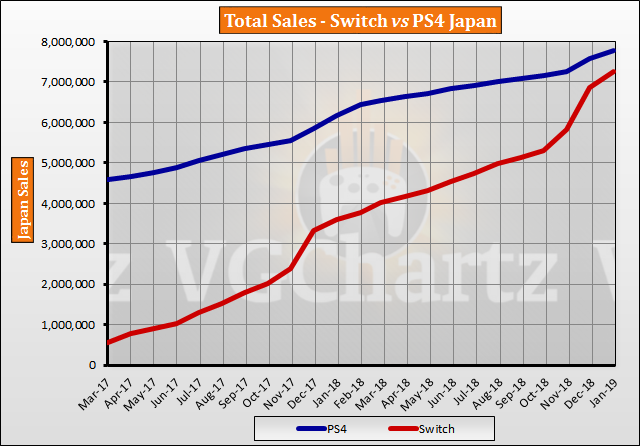 January 2019 is the 23rd month that the Nintendo Switch has been available for in Japan. During the latest month the gap grew in favor of the Switch in Japan when compared to the PlayStation 4 by 199,618 and by 2.05 million units in the last 12 months. The PlayStation 4 is currently ahead the Switch by 522,361 units.

The gap is closing! :D

Yeah, a couple more months ans the Switch will have past the PS4.

Look at the first graph, see that cliff at the end during the holiday season? Switch slid down that cliff to almost reach the bottom of the PS4's 3 year advantage.

If the trends and baselines continue, the Switch should pass the PS4 by April or May.

At the very least, it should pass it once Fire Emblem Three Houses comes out, plus Youkai Watch 4 coming in summer as well.

Europe numbers are less reliable, meaning that a lot of adjustments would have to be made for these charts each month( this is just my speculation).

If we had an official European tracker like NPD in the US or Media Create in Japan, we certainly would have such one already. But the way it is, anything from Europe or RoW is just a guestimate until the numbers can be more or less confirmed and adjusted by some official numbers (which mostly consist on quarterly reports) .

Additionally, unless I'm mistaken, PS4 is consistently beating Switch in Europe. This means the graph would continue to diverge and would be pointless. Perhaps it'll change in the future, but said graphs are to indicate close/converging trends, not diverging.

Why only the japan comparision.
Everyone knows portable consoles have always been more popular than home consoles in japan.

Also why not compare other regions like NA , Europe or rest of the world.

There are comparisons done in other parts of the world.