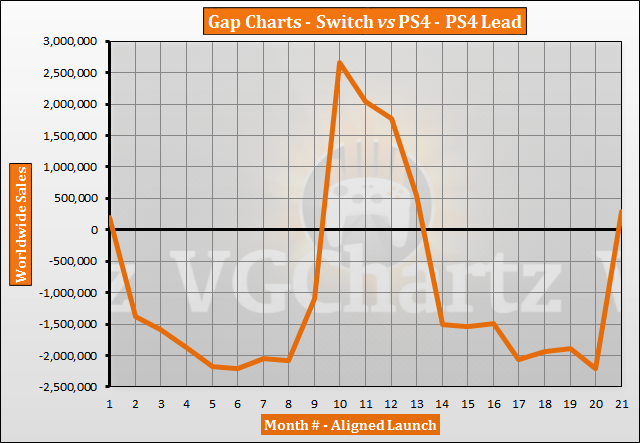 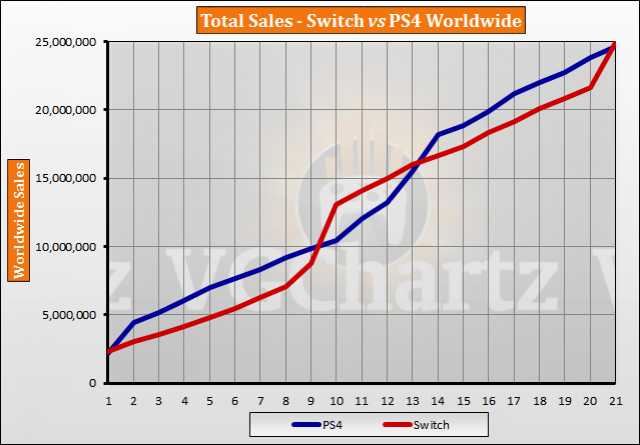 The 21st month on sale for the Nintendo Switch is November 2018, while for the PlayStation 4 it is July 2015. The gap will likely grow again in December.

I know it's passe to say at this point, but again, I never would have thought after it's reveal that the Switch would be on relatively the the same sales trajectory as the super-fire-hot PS4, but here we are. And slightly better at this point no less. I predicted a 55 million ceiling for the Switch. I thiiiink I'll be proven wrong.

And the first graph looks like a heartbeat. IT'S ALIVE!!!

It's a real tug of war between these two in'it. The shape oddly resembles a double helix like in DNA. I think legs are the key here and for better or for worse, playstations always have better legs than Nintendo home consoles. But since switch can be considered both a handheld and home console, it's a bit of an anomaly regarding legs. Regardless 2019 will be the switch's biggest year and it's the third one. I don't know if 2020 can be bigger but the 4th year of PS4 was it's biggest so the contrast between the two is exciting

We're gonna see a lot of back and forth between these two over the next two years.

I'd say even more than just the next 2 years.

I think there will only be one more set of criss-crosses and then Switch will stay on top. We'll just have to wait for another year and see though.

Does this DNA helix show that the consoles were made one to complement each other?

i think the "last 12 months gaps "stats is the most significant, cause you see the trend was you compare the same period.

Switch led by ~2m units through the first 12 months. Through 24 months, Switch's lead will be ~4m. It will become hard for the PS4 to keep up once Switch gets revision and price drop to properly address the handheld market.

Thanks Wizard. Will you also tell me when the world will end?