The western-themed action adventure game from publisher Rockstar Games and developer Rockstar Studios - Red Dead Redemption 2 - sold 6,233,893 units in two days at retail, according to our estimates. First week sales can be viewed on the VGChartz Global Weekly Chart for the week ending October 27. 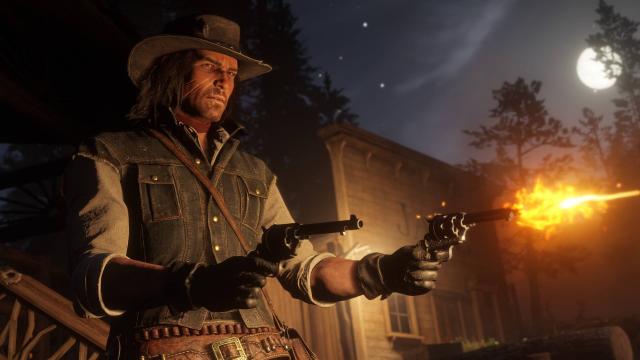 Breaking down the sales by region, the game sold best in Europe with 2,717,143 units sold (44%), compared to 2,308,758 units sold in the US (37%) and 133,731 units sold in Japan (2%). Looking more closely at Europe, the game sold an estimated 601,377 units in the UK, 449,034 units in Germany, and 419,731 units in France.
The original Red Dead Redemption has sold 6.57 million units lifetime at retail on the PlayStation 4 and 6.45 million million units on the Xbox One. The game has sold a combined 13.02 million units at retail.
Rockstar Games announced the game sold-in over 17 milion units in its first eight days. The figure digital sales, which VGChartz does not track.
Red Dead Redemption 2 released for the PlayStation 4 and Xbox One worldwide on October 26.

Will be the second best selling game this gen behind GTAV

Rockstar has no competition

Heeeeey. Don't you guys usually put "first week" even when it was two days? ;) That's still a ton of copies, though!

Wow it clearly sold a ton of digital copies if the VGChartz estimate is more than 10 million units lower! Although the official numbers do include an extra 4 days of sales.

According to Take-Two, the 17 million is copies sold, not shipped.

Sold to retailers. So, shipped.

On their fiscal report, it says "the title has sold-in over 17 million units worldwide." I thought that meant sold to consumer but I could be wrong.

Oh my bad. Thanks for the clarification!

Wouldn't that be an extra 6 days? Article says VGChartz numbers are 2 days of retail, vs 8 days for the official Rockstar numbers. That means the official numbers are basically a whole extra week of sales, so we won't have a great comparison until we see how big the second week drop off is according to VGChartz.

Sorry I thought it was until the end of October for some reason.

I got mine retail, have yet to start it yet. I want to be lost in this experience, so I need to wait till I have more free time at home. Really looking forward to it though!

The game sells half its predecessor's lifetime retail sales in just 2 days of retail sales, and you say retail sales are down? Unless you mean as a proportion of total sales, but even then it's still probably 50% retail for the first 8 days, as VGChartz has the first 2 days as over a third of the official 8 day numbers, and the 8 day numbers is sold to retailers, not consumer.

I can't tell if you're being sarcastic lol