Take-Two Interactive announced in its financial report for the fiscal second quarter of 2019 sales for Red Dead Redemption 2 have surpassed 17 million units worldwide. 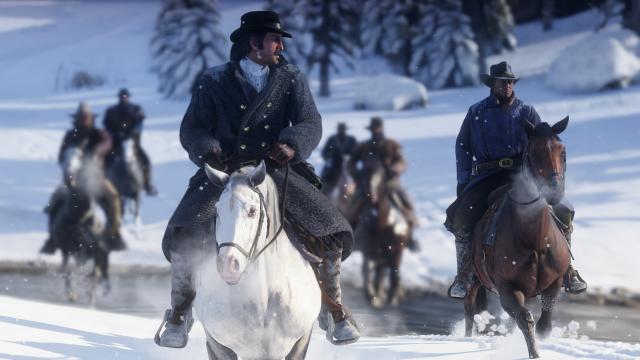 Read what Chairman and CEO of Take-Two Strauss Zelnick stated in the financial report below:

Take-Two delivered better-than-expected operating results, including growth in Net Bookings, during the fiscal second quarter. This outperformance was driven primarily by Grand Theft Auto V and Grand Theft Auto Online, as well as the successful launch of NBA 2K19.

As a result of our strong second quarter performance and outstanding early results from Red Dead Redemption 2, we are raising our financial outlook for fiscal 2019, which is also poised to be a record year for Net Bookings and Adjusted Operating Cash Flow. Looking ahead, we have a strong development pipeline across our labels and are exceedingly well positioned for long-term growth and margin expansion.

Red Dead Redemption 2 launched for the PlayStation 4 and Xbox One on October 26.

Holy shit! So much for BO4 outselling it as some people expected lol

Not sure why you'd expect COD to beat RD2. The series is past it's prime while RD2 was a much anticipated sequel to a beloved title from the last gen.

I don't think anyone expected BO4 to have bigger numbers the first few weeks, since COD is an yearly release and RDR2 is a sequel to a game that came out 8 years ago, but do we even know what current BO4 numbers are for you to make that statement ? Also, COD is not "past it prime", a quick look at last year's iteration should tell you that.

According to VGChartz, the best selling COD title is BO3 with just over 15 million sold at retail. There's no way BO4 has already hit 17 million.

I didn't say that it did. I said you shouldn't be making statements like that using assumptions, instead of factual evidence. like you just did in your comment. It's just lazy and fanboy-ish.

And if you insist on using past performance like that, at least mention the fact that it's 15 million for the PS4 version alone.

Whoops I forgot the other versions. I guess it's technically possible that B04 will outsell RDR2 over the long term but I highly doubt it.

Wow those are insane numbers.

Holy cannoli! These are some god tier sales, only Rockstar to achieve such a thing.

yeah it doesn't matter after all huge sales are huge sales, on rereading, the weekend record and subsequent 3 day figures are actually separate but the way it's written up makes it seem like it's all one piece .

So 17 million in about 5 days, assumining the quarter ended on Halloween. Even Call of Duty at its peak took a couple of months to do that.

Very impressive. Now to see how far its legs take it.

Well i guess all that hard work paid off

Looking forward to seeing what the PS4/XBO split is like.

Honestly this game is just absolutely amazing. Idk if this is a possible award, but consider this game of the decade!. I was expecting just another western GTA when i bought it on Saturday, but I got way more than I could ever of expected (Never watched any of the trailers tbh, I just knew that Rockstar would make a good game).

Muhammad, peace be upon Him!

Just expressing my amazement at the sales figures.