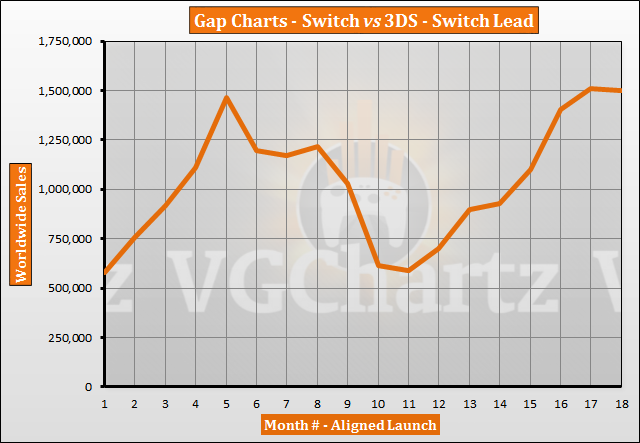 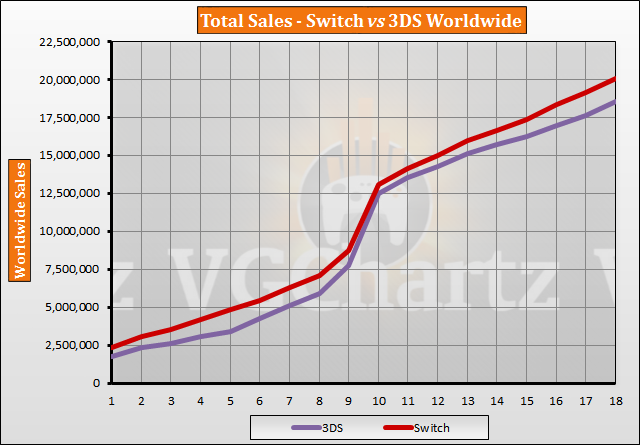 The 3DS launched in February 2011 (however, 3DS sales have been aligned to March 2011, since it only launched at the end of February in Japan), while the Nintendo Switch launched worldwide in March 2017. The Switch has sold 20.06 million units, while the 3DS sold 18.56 million units during the same timeframe.

Month 18: August 2018 had no first party retail release for Switch while August 2012 had New Super Mario Bros. 2 and the launch of the 3DS XL. So the gap between Switch and 3DS remained flat at a time when the 3DS had a massive advantage.

Switch's momentum is already clearly better than the 3DS's and the upcoming holiday comparison will amplify Switch's advantage. The 3DS's big holiday title of 2012 was Paper Mario: Sticker Star.

The gap chart shows that the 3DS can only compete during extraordinary circumstances. Firstly, the significant price cut in month 6. Secondly, month 9 and 10 (November and December) because the 3DS had ample supply whereas the Switch had shortages. Thirdly, the launch of a new 3DS model in month 18.

Anyone who doubts that Switch will outsell the 3DS lifetime is either very uninformed or lacks the mental capacity to put two and two together.

I hate how initial article comments can't have paragraphs. Four paragraphs squeezed together into one wall of text. Sigh...

The fact that the graph is very similar is interesting...

Fascinating how both consoles launched in March and followed a similar sales trajectory. Switch seems to be destined higher, but follows a very similar path as it does so.

Looking good for the Switch. Keeping the lead stable

It will be interesting to see the differences between the consoles once they both get the Pokemon boost. Considering 8th gen pokemon is the first mainline entry on a home console (technically hybrid, but still), the differences of hardware and userbase might be a factor to pay attention to.

This chart tells us more about potential Switch sales than any other. In the nexst year or two we will see if the Switch can hold of the 3Ds.

The 3DS had an early price-cut, and you can see it in the gap chart, the point the direction the gap goes reverses. Switch reversed the trend again, but seemingly is now on the same level. Let's see if Pokemon and Smash bring Switch into overdrive and if this holidays the Switch can win against the 3DS. If it does, the Switch probably will outsell the 3DS long term.

You can see now already that the Switch can more than just hold off the 3DS. 3DS needed, in order, a hefty pricecut, huge stocks while the Switch had supply issues and now the XL model just to more or less keep up with the Switch. Switch will crush the 3DS this holiday season as it didn't have anything close at the time to measure up to either Super Mario Party, Pokémon Let's Go or Smash Ultimate, let alone all three together

Wait. At this point already released the XL model for 3DS? That early? Woah. If that's true, then Switch clearly will sell more than 3DS.

Remember the 3DS had a massive price drop allready in the first 6 months. If the 3DS didn't have that those sales would have been much much lower

Yes, 3DS XL released this month, hence why Switch is very slightly down this month