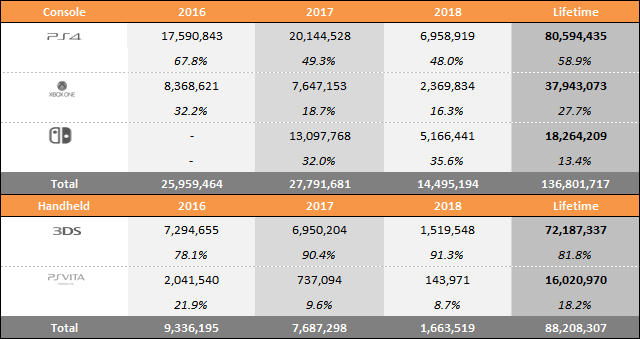 That PS4 can be down nearly a million YTD and still have 48% market share is really quite amazing. Looking at the YoY numbers we can see that the PS4 is down 1.3% in yearly marketshare compared to 2017. We see that the the Switch is up 3.6% and interestingly the Xbox One is down 2.4%.

The reason this is so interesting is because it means that even though the PS4 has the most to lose share wise, the Switch is taking more market from Xbox than the PS4. This is really interesting and at first seems counter-intuitive. The Xbox is really selling poorly.

YoY growth or loss is meaningless unless you have proper context to put it in. You can sell 2 units and be up 100% if you only sold 1 last year. YoY growth is only relevant when you apply the real numbers to them as a portion of the entire market..

It’s crazy that PS4 is the only console down YoY, but is still dominating. I think with BO4, RDR2, and Spider Man, it could potentially have a better holiday season than 2017.