Being a fan of Advance Wars back in the good ol’ archaic days of handheld gaming, I was naturally excited to learn about Wargroove, which seems to be a long overdue spiritual successor to that game. But once I learned that Chucklefish, the developer of a recent favorite adventure game of mine called Starbound, was behind the creation of this project, my interest piqued to soaring new heights. Fellow fans of that game will be further pleased to learn that there will even be a sort of cameo featuring one of Starbound’s races, the Florans, who make up one of this new title’s rival factions.

Wargroove won’t just seemingly play like Advance Wars, it also looks the part as well. It takes on a charmingly simplistic GBA-esque aesthetic, containing a flat, birds-eye view perspective, and is fleshed out with vibrant colors and detailed sprites. Its cheery soundtrack harkens back to the old days of enriching synthetic melodies that help set the mood and further paint the scene, picking up any slack left by the basic visuals. Couple this with the crisp HD resolution on a big screen and you’re sure to get a fine blend of nostalgic strategy gaming amplified by more epic and modern sensibilities.

Much like its spiritual predecessor, Wargroove resembles an elaborate sort of chess-board full of immobile pieces scattered about a variety of maps. These must be strategically shifted around the environment to engage in various battles and ultimately wipe the enemy’s forces. Like the game of chess, it favors a long endurance grind and tactical maneuvering over mindless fast-paced action. You’ll work around environmental obstructions like rivers and mountains, while engaging in battles that trigger when walking over enemy nodes that are clearly displayed on the battlefield. 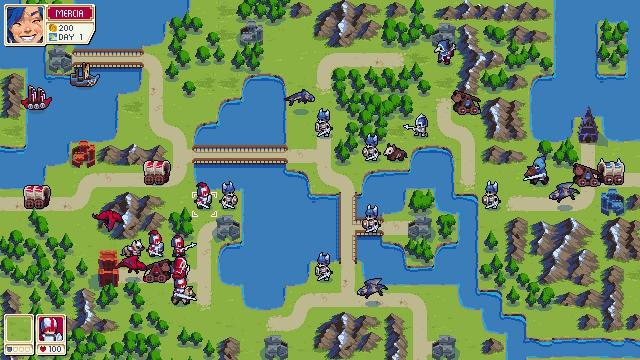 From there, you’ll gain gold, which you can use to recruit various types of soldiers, vehicles, or large weapons like ballistas, each with different styles of weaponry and vulnerabilities. You’ll essentially be using tidbits of information, like the enemy’s health (displayed near their avatar), as well as their defense, to implement your strategy and decide when and who it’s best to attack. You’ll also be launching offensives on structures and protecting your own, in an effort to gain an advantage and take control of the map.

The execution looks at once simplistic and complex enough to captivate gamers, offering the potential for long grinding sessions with no shortage of depth and strategic gameplay. Different battle units will come with their own sets of behaviors, statistics, as well as range of movement, which is clearly displayed on the grid. Apparently, your units will be more limited compared to Advance Wars, so this means you’ll have to plan carefully and efficiently. The game will allow you to battle head to head against either a bot or a real opponent - or if you’re in a cooperative mood, you can team up with a player to go against bots as well. On top of the customizable 4 player local multiplayer, the game will also boast a “robust online mode,” which should all but guarantee we’re in for a hefty dose of addictive gameplay and replay value.

You’ll be able to select a main hero of sorts, known as “commanders,” at the start of your game. The tally stands at an impressive 12 heroes, each with their own abilities. There's one warrior, for instance, that can land a devastating shield jump to nearby foes, and one who wields a healing sword that restores health to all in the area. There's even a warlock of sorts that can raise a skeleton from the ground which then fights for you, and a prince that triggers bomb explosions upon dying. These functions should make for some fun and unique dynamics, as well as subtle additional layers of strategy. This should make for one meaty story mode too, as each commander will come with their own campaign. 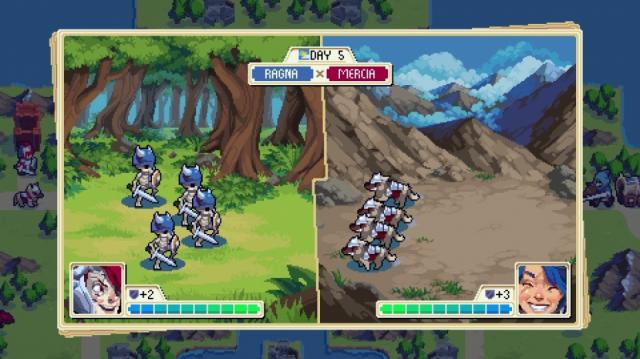 Oh, and the coup de gras? There will be a fleshed-out map creation feature, as well as a campaign editor for the creative types, control freaks, and aspiring game developers out there. This certainly looks to be an experience packed full of gameplay, especially for an indie project that seemingly came out of the blue when it was announced back in early 2017. Wargroove should be a particularly great fit for the Nintendo Switch, with its handheld and tabletop functionality that can complement the basic but in-depth gameplay quite well.

There is still no specific release date, but as of this writing you can expect to get your war groove on for the PS4, Xbox One, PC, and Nintendo Switch sometime in 2018.