In many modern first-person shooters, you play a gruff marine with a scary gun; rarely do you control a robot on wheels with a bouncy ball. That's precisely why Disco Dodgeball Remix, born on PC in 2015 as Robot Roller-Derby Disco Dodgeball, is so refreshing and fun. It helps, too, that the game is immediately accessible (although the wheel-based movement system takes some getting used to) and surprisingly deep, and features a nice collection of single-player, local multiplayer, and online multiplayer options.

Disco Dodgeball Remix is a clever mix of arena shooting and dodgeball. If you love old-school shooters like Quake and Unreal Tournament, and miss the barbarism of middle school gym class, this is the game for you. Each of the title's 15 maps are littered with balls, jumps, and power-ups. Individually or as part of a team, your mission is to slide around the level and strike your enemy with a well-timed ball throw. Dodgeball rules are in full effect here: a single hit retires a player; a catch eliminates the thrower; and, at least in Elimination mode, a caught ball will revive an ejected team mate. 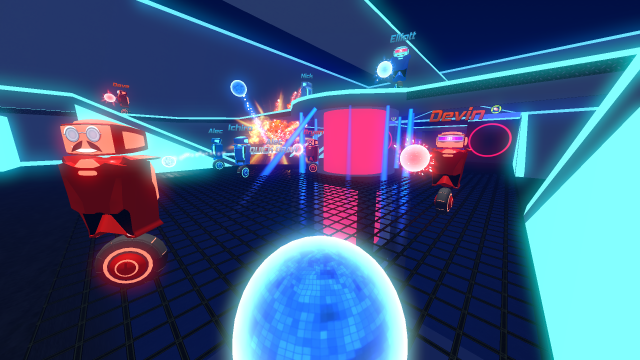 Although the game aspires to be an online multiplayer event, it includes a neat little single-player campaign, with specialized bots, boss battles, and a rogue-lite upgrade system. The campaign isn't amazing but it serves as a nice diversion between online bouts. Plus, playing through it will earn experience points, credits, and machine parts used to unlock new cosmetic items like robot heads, wheels, stickers, etc. Performing certain actions in game will also earn mission points (MP) — a team victory is worth three MP, for example — which feed into a global badge rank.

Players will earn these experience and mission points across local and online multiplayer also. Local modes are limited to two players in horizontal split-screen, and, on Switch, support two Joy-Cons. Playing Disco Dodgeball Remix on a single Joy-Con is a little awkward — the stick and face buttons control looking/turning and movement/strafing, respectively, like Turok — but it's nice in a pinch. Unfortunately, the game doesn't include four-player split-screen. 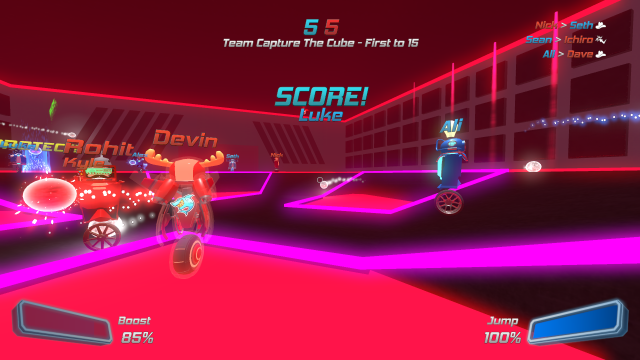 In any event, online multiplayer is the real selling point. There are three options: quick play, create, and search. Select quick play to drop immediately into an online match. If there aren't enough people online, the game fills all vacancies with bots and replaces them as actual humans log in. Note: the game has yet to go live as of the writing of this review, and servers were mostly empty pre-launch. Disco Dodgeball Remix will probably live or die depending on the strength of its online community, so factor that into your buying decision.

That said, the game's crafty artificial intelligence and wide variety of game modes and maps makes it a worthy investment even if servers remain unoccupied. It's great fun testing your mettle against a collection of AI bots in traditional modes like Score Battle and Elimination, and quirky game types like Hoops — where opposing teams must find a golden ball and shoot it at their rival's floating square goal — and Capture the Cube, a twist on capture the flag. Try Capture the Cube in Fort, a throwback to Block Fort from Mario Kart 64, for optimal results. 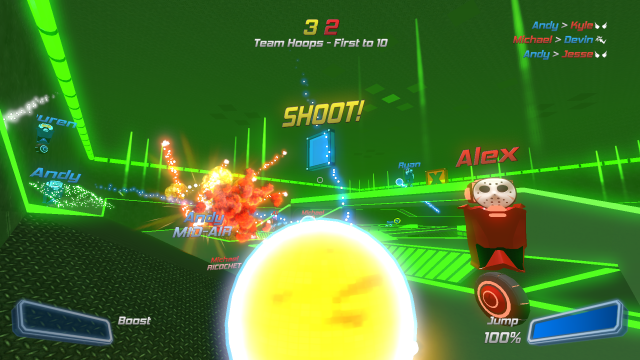 One thing that holds this unorthodox shooter back a bit is its gamepad controller scheme. Even with the stick sensitivity maxed out, there's a sluggishness to aiming, particularly along the vertical axis. The game feels like it was built for keyboard and mouse. The Switch version includes motion controls, but they're unrefined.

With its neon colors and thumping, high-energy soundtrack, Disco Dodgeball Remix summons a dance-club aesthetic and soundscape. While it might be garish in a vacuum, it works wonders here. It all feels like the world's craziest laser tag arena. Besides, the bright colors and clean lines make spotting team mates, enemies, and loose balls easy.

Say goodbye to Doomguy and all the muscly commando types often featured in first-person shooters, and say hello to a neon robot with a handlebar mustache. Super Dodgeball Deluxe is visually and thematically different enough to stand out in a sea of shooters, and sufficiently fun to keep it in your regular rotation. Gamepad controls aren't as responsive as possible, and online communities might dry up, but there are enough offline modes, game types, and bot customization options to warrant a recommendation.

This review is based on a digital copy of Disco Dodgeball Remix for the NS, provided by the publisher. 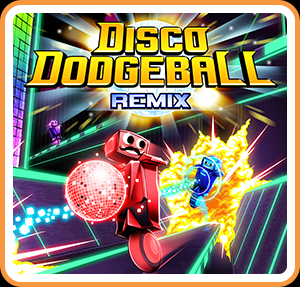