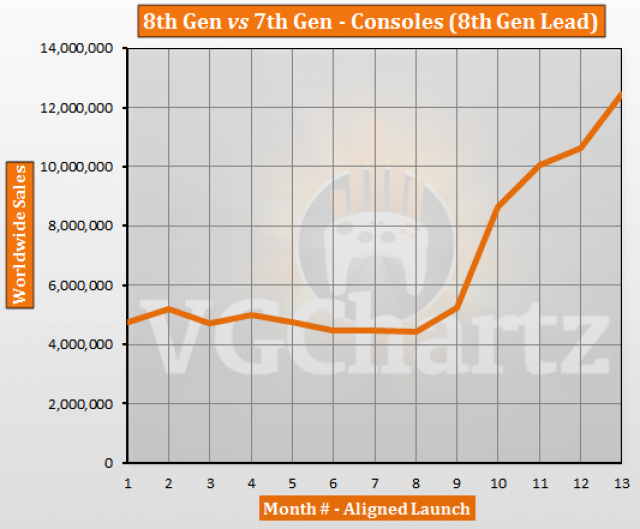 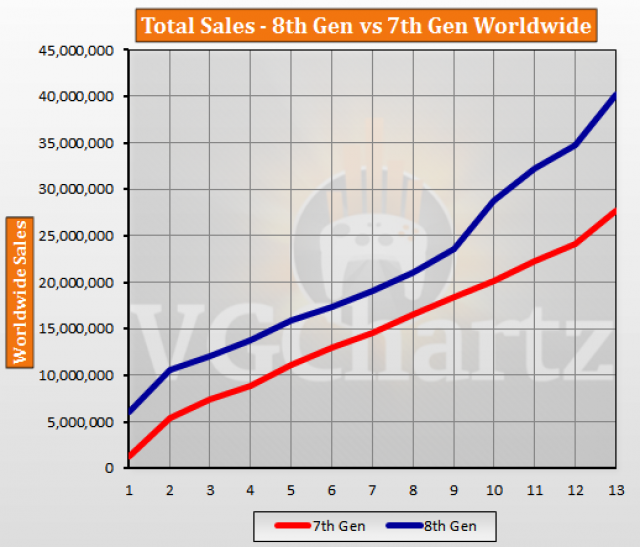 The 8th generation remained between four and six million units ahead of the 7th generation for the first nine months. After that point the gap has continued to grow.

I'm fine with having the Switch along with PS4/X1 for this chart, but this should not be labeled as 7th gen vs 8th gen. The Wii U is the 8th gen Nintendo home console. You can't just pretend it doesn't exist just because it failed miserably.

the wii-U is a upgrade from the wii, like Xbox one X to XBox one, and PS4pro to PS4. Nothing more.

Wii U is Wii's sucessor. Wii is a 7th gen console. Wii U is a 8th console. It's really simple.

A manufacturer can have 2 consoles in a generation. Examples are the Atari 2600 and 5200, or the PC Engine TurbographX and SupergraphX. And like Froster noted below, with the Wii U being fully compatible to the Wii, including all it's peripherals, one could even consider the Wii U being still a 7th gen console, as it's concept is pretty close to the Pro and One X, being a more powerful version of the Wii

The switch have the technology of the 7th gen, but ist the 9th console. (Sorry, but touchscreen is not new. PSvita and nDS have it since 7th gen)

It isn't Gen 9, otherwise that would be admitting it's either Gen 9 Console or Gen 9 Handheld.

All sources I can find state that Switch is considered an 8th generation platform. Being a slight step up from the Wii U.

See? The Wii U was the only reason 8th Gen previously wasn't comparing to 7th Gen. With a proper unit in there, 8th Gen has the lead.

Not just the Wii U, the XBO too. PS360 started very slow, unlike the PS4 and the Switch. When they will start gathering steam, this gen will be hold back by the weak XBO sales

Xbox One isn't falling NEARLY as behind as Wii U did.

True, but it still won't come anywhere close to 360 sales figures. With the Wii U being Switched out, the XBO is the console to drag the sales down now

You want not coming close to its predecessor's sales? It's nearly a 100M unit difference between Wii and Wii U.

I never said the Wii U didn't hold sales back, I'm just saying that so does the XBO. And since the Wii U isn't part of the graph, but the XBO still does, it's the only one remaining to hold the total sales of this gen back

Whatever you have to do to fluff 8th gen numbers.

And whatever you have to do to shit on them.

Where did I shit on them?

Implication in which someone has to include 8th Gen to "fluff" 8th Gen is that you would prefer the shit numbers.

I'm stating a fact. Wii U/XOne/PS4 won't get anywhere near Wii/360/PS3 in terms of sales. So the only way you could get close to those numbers is by adding Switch.

It's a good thing Nintendo mulligan'd. And no one "added" Switch, it took the place of a console better suited for the butt of jokes.

The Wii-U is an upgrade from the Wii, like Xbox one X to XBox one, and PS4pro to PS4. Nothing more. According to this Switch is Gen 8. Nothing more

Considering the Wii U's full backwards compatibility including all the peripherals, very similar look and also some precedence (NEC SupergraphX, same gen as the TurbographX yet vastly expanded capabilities and full BC, and also the Atari 2600 and 5200 during the 2nd gen), I wonder how nobody (including myself) thought of it that way before. Wii U really seems closer in concept to the Pro and One X than to a real new console - with the exception of the Gamepad, making it all blurry again.