Total Sales and Market Share for Each Year – 8th Generation 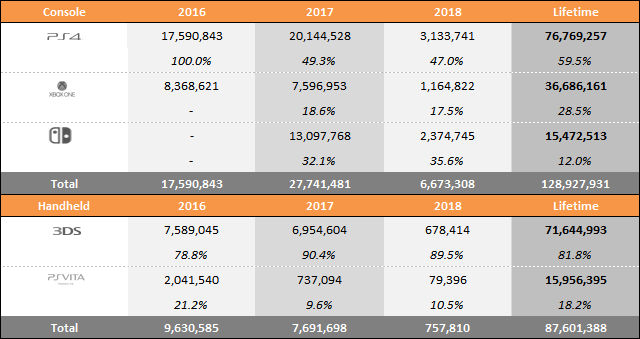 Yeah it seems that probably 2018 will be peak year for PS4.

It's so weird to see Switch labeled as 8th generation.

You have a very strange definition for home console. I guess the Wii wasn't a home console in your opinion either.

It has been Friday night though, so maybe you'be just been drinking.

'Cause the PS4 it's selling so much more than the Switch.

Well the media is wrighting as if the Switch was the hottest so the numbers are a suprise to me. The start for the Switch is the best ever, but i felt it sold more then enything - so i asked;) sorry for asking...

The media is "wrighting" as if the Switch was the hottest because until the beginning of this year, it was. It was winning almost every month in America since it's launched, with only a few months going to the PS4. Considering the first few months of the year are always down for new consoles, it's not a surprise if this is the same for Switch.

Also you have nothing to apologize for. You simply asked a question. I wish people wouldn't downvote comments like this, because then the creator of the comment always bites back with a subtle way of saying "Yes, I must be right because I'm being given a negative reaction!" You are wrong, you just didn't know better. Which is fine.

writhing is a diffikult word ;) (mobile)

While the XONE is up YoY it is imo not in the best spot. The boost in sales comes from a price cut and the X release i think and not sure how long that effect will last.

Apparently xbone x did not help boosting sales. What a shame

Well it is up 28% so far this year , while it's not overtaking the PS4 in the US it's shrinking the gap .

Now you're playing with power!!