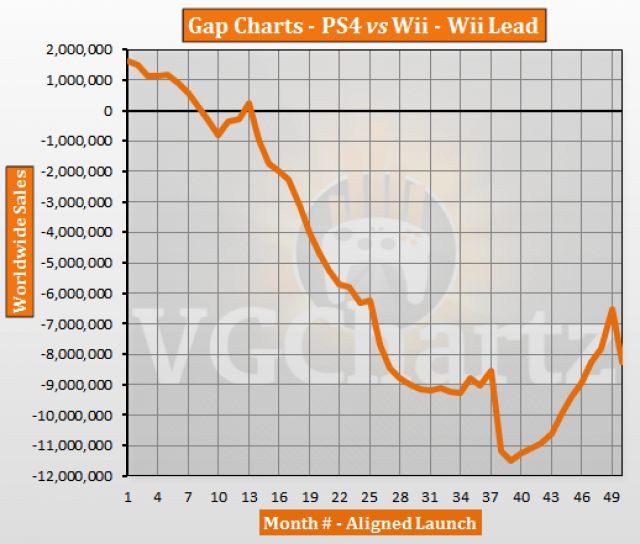 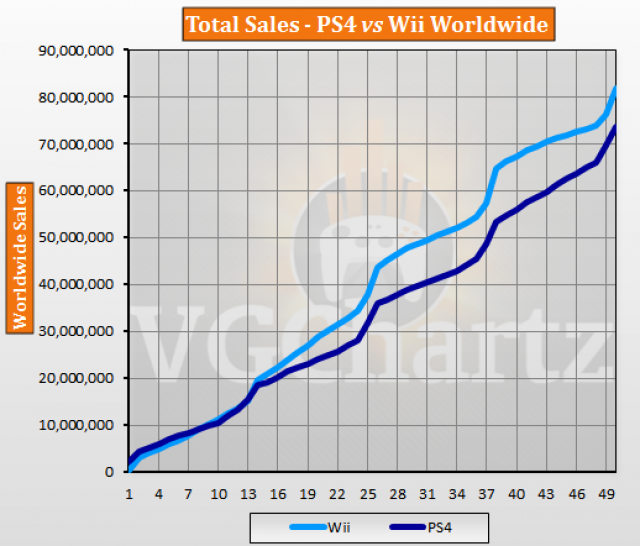 December 2017 is the 50th month that the PlayStation 4 has been available for. During the latest month the gap grew in favor of the Wii when compared with the PS4. The gap increased by 2.89 million units in the last month. However, over the last 12 months it has decreased by 2.87 million units. The Wii currently leads by 8.27 million units.

Wii was a beast the first 4 years

PS4 will take a big chunk of that lead this year though.

24.2M in one year is absolutely insane.

Matching Launch to date, this year the Wii did only 11 million, PS4 will be at least 18

This is the beginning of the end for the Wii in this battle. Very good first 4 years but average after that.

Really interesting to see who will take 2nd place after the Switch.

PS4 will blitz past Wii soon

This is developing exactly as most people were expecting. Nothing surprising really.

The wii was a freaking beast. How did sales fall so bad at the end???

It's limited architecture caught up with it after four years and Nintendo, in its hubris, didn't think to replace it until year six.

So you are really all a bunch of assholes on this forum... I come and wait for explanation and arguments but all you can do is insult and negative dislike to make disapear my comment without arguments. So go fuck all of you, and please now you can banish me. I will still come and visit to appreciate some sales data.
Best regards.

Wii U and Switch = PS4 and PS4 Pro... this is a retard conclusion... Sorry.... JUST USE YOUR BRAIN - Do you have to buy again all PS4 titles to play it on a PRO? Or PRO has titles that are exclusive that didnt launch on standart PS4? Its simple. Switch has Splatoon 2 and Mario Odyssey, Wii U not... PS4 PRO has the same catalogue than PS4... Thats what you deserve

pfff...As if the Wii had also got a second boosted version after 4 years....When will VGCHARTZ stop to cumulate sales of the PS4 and PS4 Pro or please, be coherent and consider that Nintendo this (8th) generation has sold already 28,5 millions and not 15.

Are you trolling or just really daft?

Most of the PS4 sales are the non pro SKUs. Its continued success is based on software support that drives the hardware sales. The Wii always had issues with 3rd party support. Once its first party games dried up and the wow factor over its motion controls died down, its decline was inevitable.

As for the Pro being combined in sales, it makes sense as it is still the same console with an added perk being able to output at 4K. Requesting for the numbers to be separated would be the same as asking for the Nintendo DS or Playstation 2 numbers to be divided across a plethora of various SKUs.
Finally, the Switch is its own platform and cannot be combined with anything else for total sales. If and when it receives a hardware revision those sales will be combined with the original SKU as has been done for all other consoles previously.

Thank you for your answer Branko