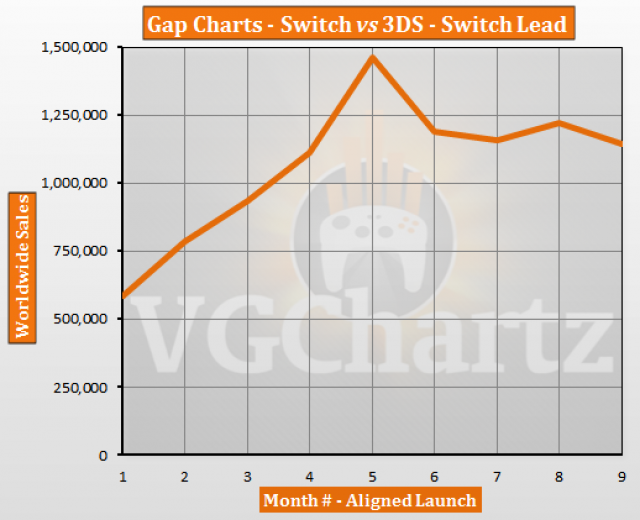 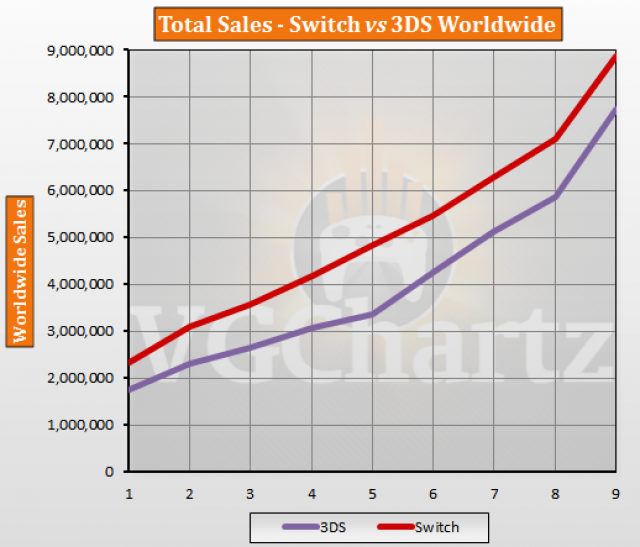 November 2017 is the 9th month that the Nintendo Switch has been available for. During the latest month the gap grew in favor of the 3DS by 77,719 units when compared to the Switch during the same timeframe. The Switch is currently ahead of the 3DS by 1.14 million units.

The 3DS launched in February 2011 (however, 3DS sales have been aligned to March 2011, since it only launched at the end of February in Japan), while the Nintendo Switch launched worldwide in March 2017. The Switch has sold 8.86 million units, while the 3DS sold 7.72 million units during the same timeframe.

When is 3DS lite?

I'm sure this is a lot closer than most people were expecting considering they keep hearing the Switch is a breakout success for Nintendo.

The thing to remember here, is that the Switch is still at full retail of $299 and winning, meanwhile the 3DS had its August price drop in 2011 allowing it to keep pace with the Switch.

Switch is still on track to outsell 3DS and land somewhere around the PSP, GBA, 360, or PS3 once final sales ae in (which is also pretty much 3DS + Wii U). They have some huge franchises yet to release on the device.

Honestly, I’m starting to think it will finish closer to Wii/PS1 levels than PSP/GBA/360/PS3 levels.

It's possible, but we don't have enough sales to give it a safe bet outside of the PS360 sales. On top of that Nintendo generally stays on a 5-6 year life cycle for its hardware, so we could see a Switch 2 by 2022 or almost 100% guaranteed by 2023 which means the Switch has to practically be the fastest selling device of all time reach those numbers, which is unlikely at this time without a steep price drop over those 5 years.

The current record for a 5 year period goes to the DS which was over 120m, I don't see Switch matching that because it needs NA and EU numbers to be an average of 8m each annually, and it's not tracking there for NA currently, and most definitely won't reach those numbers for EU.

PS360 is a much safer bet currently. However, if they extend the life-cycle to 6 years with a successor launching the 7th, then we're looking at Wii and PS1 for sure.

The Best times of the 3ds seems to be gone. Are we witnessing the start of the declive of the handheld? On the other hand, a superstar has born.