It would have been easy, perhaps even tempting, for Runic Games to release a third entry in its lauded Torchlight series after finding so much success with those games.  Instead, the company decided to branch out and try something completely different.  The result is Hob, a gorgeous action-adventure game that harnesses classic Zelda while molding its own identity.

What's clear right from the start is Hob is a beautiful game.  Thanks to its artstyle, the cartoon graphics are bright, vivid, and bring the world to life.  Character and enemy designs are simple but fit the world naturally.  The most impressive aspects of the visuals are the environments.  There are neat viewpoints throughout the world that let you take in a sweeping preview of the next area and enjoy the gorgeous scenery before you reach it.  As you progress, the environments will also change right before your eyes as the land itself uplifts and shifts. 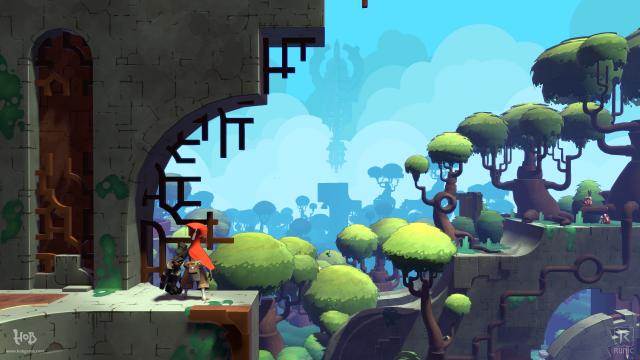 Unlike the visuals, the sound design is just decent overall, and parts of it could use more attention.  The ambient noises are particularly well done and further enhance the world around you.  The soundtrack is strong, but I just wish there was more to listen to.  There are too many sections where no music plays at all, which is a real shame and a missed opportunity.
Although Hob’s presentation is strong, it's not without blemishes.  On a base PS4 at least there are considerable framerate drops and choppy sound effects at times.  Runic Games has released several patches that have improved this, but it's still apparent that there's work to be done. 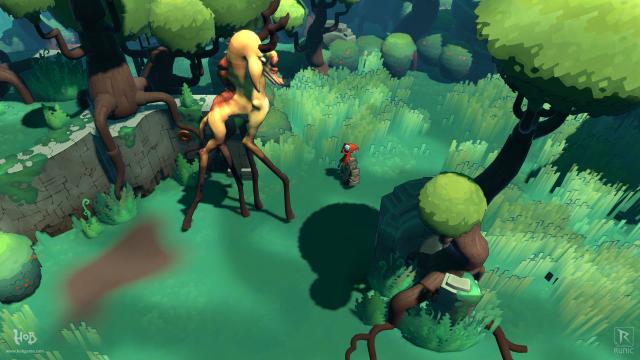 Fortunately, these technical hiccups don't tarnish the gameplay too much.  Hob is an effective blend of action-adventure and puzzler, and in some ways closely resembles Zelda: A Link to the Past.  For example, as you progress you will learn new abilities that allow you to reach areas that were previously blocked.  Puzzles are also mostly straightforward but are well thought out.  Most puzzles you complete will reward you with a stunning earth transformation.  Whole sections rise or fall, opening up new paths that allow you to progress and explore.  This is a really neat mechanic that I hope other games utilize as well.
Combat isn't as rewarding as solving puzzles, especially if you're familiar with these types of games.  I felt the normal difficulty was still a bit too easy, so if you're looking for more of a challenge you’ll want to set it to hard.  Enemy designs are good and most require different strategies and abilities to overcome, but a bit more variety would have gone a long way.  A noticeable omission is the lack of bosses.  Boss encounters really would have been effective climaxes to some of the dungeons throughout the world.
To defeat enemies, your primary weapon is a sword attack which can be upgraded by finding sword shards hidden around the world.  You also have a mechanical arm that allows you to break walls or enemy shields and can be upgraded with new abilities.  As you progress in the game, enemies become stronger and require the use of your new abilities to be defeated. 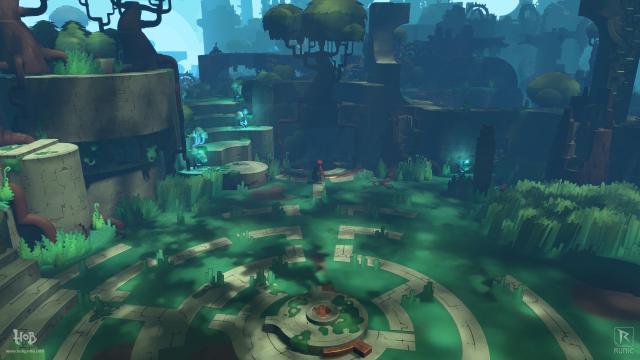 Although enemies and puzzles are relatively straightforward, they are often made frustratingly challenging due to poor camera angles.  Some puzzles require platforming to reach certain areas.  This is well and fair, and even a welcome break, but the camera isn't always placed in a position that helps.  Indeed, I felt like I died more from plunging to my death than at the hands of enemies.
All the challenges you face in Hob are for a good reason and draw on one of the standouts of the game.  Hob’s story, even if it is predictable, is told in an unconventional manner which sets it apart in today's market.  In an industry that increasingly tells stories blatantly, Runic Games dares to tell Hob’s tale without words at all.  Instead, you experience the story in a way that allows you to fill in the gaps yourself.  As you progress, more about the land, how it came to be, and your role within it is revealed.  This wordless approach is very effective at leaving a lasting impression and gives players the opportunity to create their own meaning and form their own connection to the story. 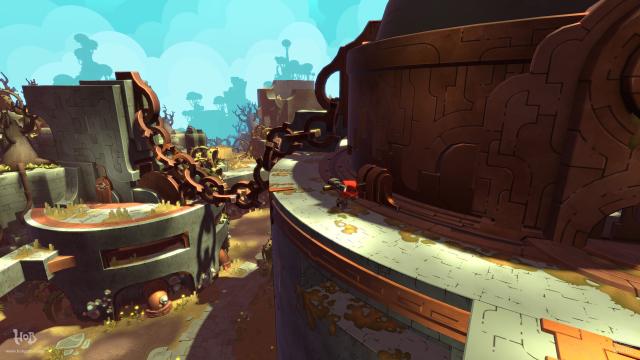 Runic Games is to be lauded for taking a bold chance when the company could have simply revisited familiar grounds with another Torchlight.  Instead, with Hob it's crafted a game with a unique narrative, a beautiful artstyle, and an often awe-inspiring land transformation mechanic.  Even with its shortcomings, Hob is an easy recommendation for those who yearn for classic Zelda and those willing to see how far wordless narratives can take them.

This review is based on a digital copy of Hob for the PS4, provided by the publisher.

Thank you for reviewing this game! I was worried it would fall under the radar. Honestly, if it wasn't for ACG's video on it I wouldn't have ever even heard of the damn thing! It's a great game and I agree with pretty much all of your points.

The technical issues in this game can be very annoying at times. Twice I got stuck right under a tree in a bunch of bushes, leaving my character stuck in the same place. After fondling the controller for a while I could get out, so it wasn't too much of an issue, but on PC this game can also go from 120 fps to 80fps for no reason at times.

I don't really agree with you on the music. I think this game uses ambiance a lot better than say, Breath of the Wild. And even though I don't remember the songs, I do remember the music being particularly good for what the game was trying to accomplish.

I think another problem I have with this game was that near the end of the game the world starts to become segmented. In the beginning of the game you're working through this natural progression, almost like a Metroid title, where you're unlocking elevators and different landmasses that activate switches and return you to the overworld to make more progress. But the last area of the game has clumsy design, in which you just follow these checkpoints from one end of the world to another collecting these meaningless filler items. Instead of naturally progressing, now you just follow quest markers to areas and do a few more tasks to get a Titan Core.

Even worse is that when the game starts becoming dependent on Quest markers, it pulls them away from you after you get the first two cores. So ... you have to figure out what to do by yourself with no sense of direction because all of the world is already unlocked.

Ok ... wtf. JUST TO BE CLEAR, I DID USE THE ENTER KEY WHEN WRITING THIS! It's just not registering XD

This is VGC, we understand.