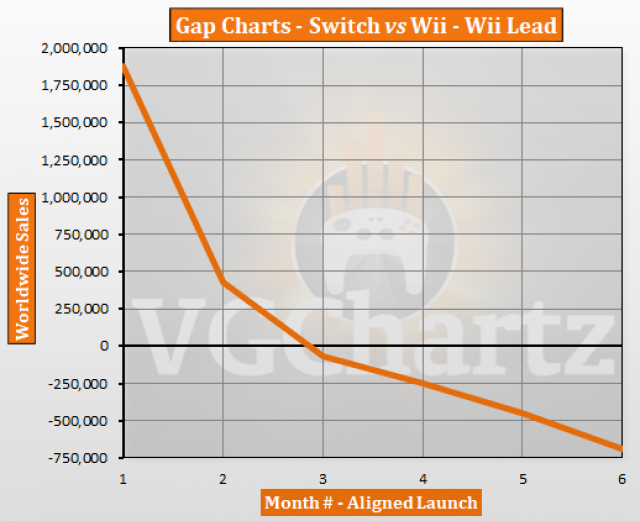 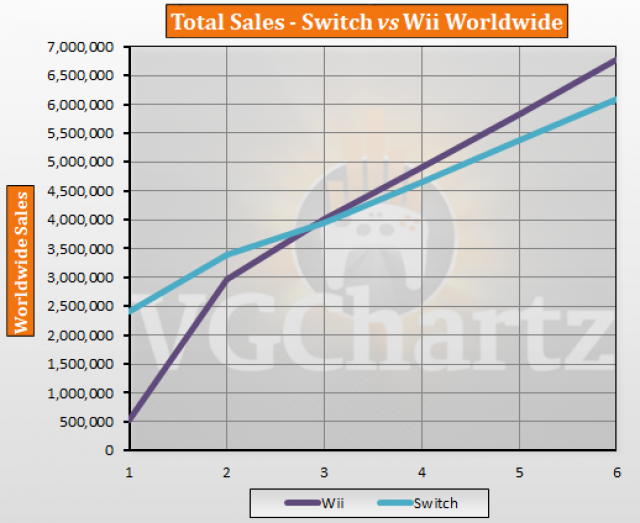 August 2017 is the 6th month that the Nintendo Switch has been available for. During the latest month the gap grew in favor of the Wii by 236,047 million units. The Wii is currently ahead of the Switch by 687,529 units.

I believe the Switch can close the gap with Odyssey and the upcoming holiday season. Will be practically a second launch if you ask me.

Yeah. It really confused me when people actually thought the Switch wouldn't launch with just Zelda. Breath of the Wild alone is enough to get the Switch a few million, Splatoon 2 was the game needed to keep up demand in Japan for the next year, and Mario Odyssey is the game to practically re-launch the system all over again.

Like seriously, there were actually rumors(I believe from even Laura Kate Dale) that the system would launch with Zelda, MK8D, and Splatoon "Refresh" all at once. Lmao.

As much as it is, lot of people were bitching about "only Zelda at launch DOA lmao". Seems like Nintendo's games release strategy shut them up pretty fast.

Not bad at all. We'll see what the NS does during it's first holiday. I think it might catch a bit on the Wii.

This is remarkably close. As already mentioned, Odyssey will definitely close the gap and considering that this is also holiday season, we could very well see a Switch lead if Nintendo keeps stock. There are even more titles including Xeno 2, Skyrim, Rocket League, DOOM, Fire Emblem Warriors...coming out later this year as well. I have high hopes for this year closing it out, but how the Switch holds off beyond 2018 is the real test.

that looks really promising since wii was released on a november... holiday sales + new toy sales.... i am confident switch will be close on both of their first year sale

"since wii was released on a november"

Which changed absolutely nothing. And as always, launching outside of the holiday season is a benefit, because it gives you your first true year of holiday sales within a few months, since the console is no longer under a harsh supply strain at launch.

But again a holiday launch has no added effect on a consoles sales. The console was going to sell out to its fans regardless of when it launched, like they always do, it's a matter of supply that determines sales at launch, and by the Switch not launching in the holiday season it doesn't have to wait a full 12 months to net the benefits of its first true holiday, whereas those consoles that launch during the holiday have to wait a full 12 months to see those benefits.

Wii, ps2, ps3, ps4, xbox one.... etc etc was released in the us around oct, nov, holiday season... why? Because it benefits for the holiday wave of buyers. Why do companies release console around that time? Because it has a benefit...do you work in sales business?

Microsoft and Sony release their consoles in the latest quarter of the year because the most popular third party IP''s can release on their platform. Unlike Nintendo MS and Sony are much more connected with third parties and can't afford to mind nobody else and do whatever they please. Sony tried that with the PS3 and it did not turn out pretty.

Aligns perfectly with what we promised concerning availability of units the first year.

Not bad at all. We'll see what the NS does during it's first holiday. I think it might catch a bit on the Wii.