From the makers of Jotun comes Sundered, a captivating hybrid between a Metroidvania and a rogue-like. If that marriage of genres seems incongruous to you, you're not alone. Yet developer Thunder Lotus Games crafted an elegant solution. The overall structure of the game is fixed, which allows the classic Metroidvania staples: backtracking, unlocking abilities to access gated areas, etc. However, sub-sections inside the larger structure are procedurally-generated, changing after each player death. It ends up being the best of both worlds.

Sundered is the story of Eshe, a scavenger who falls into a mysterious cavern holding the remains of a long-forgotten civilization. Guided by an otherworldly voice, Eshe explores three unique environments, collects loot, fights eldritch monsters, and attempts to escape with her life. Along the way, she'll stumble upon clues about the two factions that went to war and died within the cavern: the Valkyries and Eschaton. 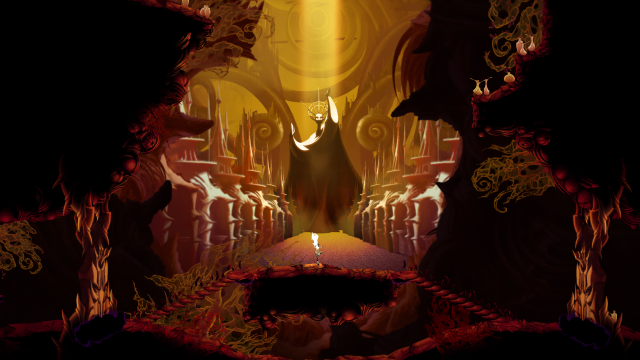 Sundered follows a rather straightforward gameplay cycle: explore, fight, die, and upgrade. Players, controlling Eshe, will explore outward from the game's main hub, illuminating new areas on the map and running afoul of swarms of monsters torn seemingly from the pages of H.P. Lovecraft's dream journal. Eshe will put up a fight but will, invariably, become overwhelmed. She'll die, then be resurrected back at the hub. There she can spend loot, earned from treasure chests and enemies, to upgrade her health, armor, shield, etc. Then it's back out into the unknown.

This loop is effective and engaging. It combines the unpredictability of the rogue-like with the predetermination of the Metroidvania. Players will find themselves rewarded not only for toppling a boss or unlocking a new ability — two things set in stone in Sundered — but also for making the perfect run through a randomly-generated dungeon with randomly-generated monsters. It bestows upon the title an extra layer of replayability. It also, unfortunately, burdens the player with some painfully long load times. 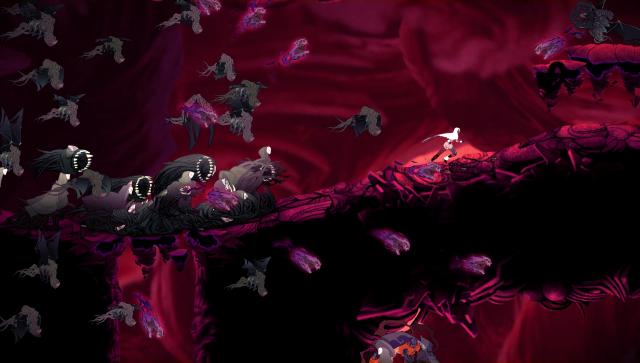 The downside to Sundered's roguish tendencies is twofold: lots of repetition and enemy hordes varying in deadliness. Since one of the four main pillars of the game's cycle is "die," you can expect to expire early and often in Sundered. As a result, you'll be retracing your steps a lot. Along the way, you'll encounter randomized swarms of enemies. The randomized nature of the swarm means that it won't necessarily scale with Eshe's progress in the game, as it might in a more deliberate Metroidvania. In short, you might get unlucky.

Thankfully, Thunder Lotus provides players with a sprawling skill tree with dozens of upgrades. Thus players can prepare Eshe for the unexpected. With enough loot, Eshe can extend her health bar, boost her armor, and raise critical hit chance, among many other upgrades. By combining these skills with unique power-ups found at Eschaton shrines across the map, players can radically alter Eshe's fighting style and abilities. As the game marches along, its heroine becomes more nimble and more powerful. The mechanics of combat, like much of Sundered, are ever-changing. 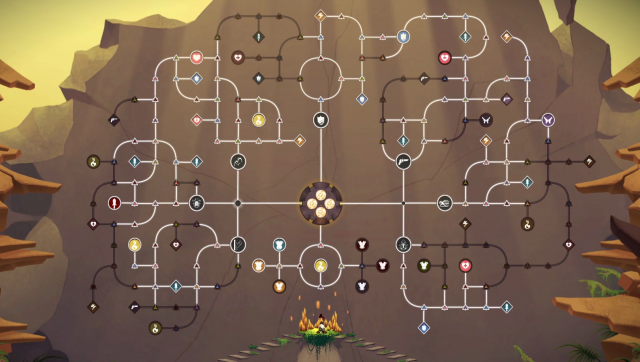 Upgrades will prove especially useful in the game's boss battles. Sundered includes both mandatory boss fights and optional mini boss fights, all of which are challenging. Mini bosses typically come in the form of a larger, more dangerous version of a standard Sundered enemy, but bosses are something else entirely: ancient, corrupted horrors. They'll take up the entire screen (and then some) and attack with devastating power. Each fight is a test of Eshe's acrobatic skill, dodging ability, and brute strength. Only players who've mastered the mechanics of the game will endure.

Defeating a boss will earn players an Elder Shard, which can be used in one of two ways. It can be redeemed at a shrine to get a "corrupted" version of a special power-up or it can be destroyed in a furnace. Players will need to choose either a path of resistance or one of corruption. That choice will change Eshe's powers, alter which bosses she faces, and, ultimately, write the game's ending. 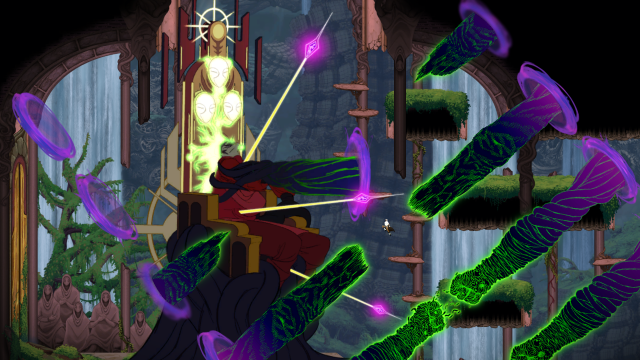 Mechanically, Sundered is an excellent game with a lot of room for player experimentation and progress. Stylistically, it's even more impressive. As it did with Jotun, Thunder Lotus uses in Sundered a hand-drawn art style that is simply gorgeous. The animations are fluid and expressive, the character models alternately beautiful and grotesque, and the backgrounds rich in detail. This is one of the best-looking games you'll ever play.

A procedurally-generated Metroidvania might seem like an oxymoron, but Sundered proves the concept's efficacy. Here is a game both organized and chaotic, filled with carefully-arranged boss fights and, at the same time, randomized enemy onslaughts. It manages to satisfy simultaneously as a back-tracking action-adventure game and as a never-the-same-thing-twice rogue-like title. Tying both experiences together are a flexible combat system, a robust skill tree, some luxurious hand-drawn art, and a meaningful moral choice.

This review is based on a digital copy of Sundered for the PS4, provided by the publisher.

I didn't even know about this game until a few days ago, I love the art style, and I'm really tempted to buy the game at some point... also the skill tree is giving me major sphere grid vibes, lol :P

I knew nothing of it, but that Sphere Grid style skill tree pretty much has me sold. lol.

Lovin the game so far. Almost at the end and its a solid action game at best. Art style is amazing, but the highlight here really are the Boss Fights. Well done.

Jotun was pretty interesting but the boss fights and art work was what shinned, seems like the same here, but in a metroidvania game I would expect the general fights to be good as well, but they look repetitive indeed.
Still looks like a good game, Dead Cells appeals more from the recent entries to the genre to me, tho, specially for the Souls addition to the formula.