With games like NBA Jam and NBA Street currently on ice, the market is open to a new arcade basketball game. Enter NBA Playgrounds, a title that draws inspiration from the wacky, over-the-top sensibilities of arcade sports games gone by and adds some flourishes and gameplay oddities of its own, resulting in a game more complex and less approachable than its ancestors.

Like NBA Jam before it, NBA Playgrounds is a 2-vs-2 side-scrolling basketball game with exaggerated physics and caricatures of NBA superstars. The NBA rule-book doesn't apply here, nor do Newton's laws of motion. Players will somersault around the game's playground courts, perform gravity-defying leaps, and score up to five points in a single basket. Anyone expecting a realistic basketball simulation will leave wanting. 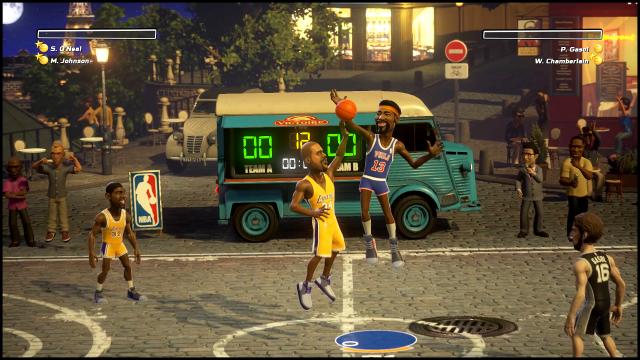 Playgrounds is not a mere recreation of NBA Jam, however. Thanks to a few gameplay quirks, the new game is more strategic but also less accessible than the seminal sports title. Playgrounds features two bars, a stamina bar and a lottery bar, that grant a strategic give-and-take to the on-court action.

Using turbo, pushing, and performing crossovers will drain the stamina bar, forcing players on each side to decide when to conserve stamina and when to go for broke. At the same time, performing special moves like dunks, alley-oops, blocks, and steals will fill the game's lottery bar. When the bar is full, your team will earn a randomized, extraordinary advantage, including but not limited to speed boosts, 12" jump boost (jump a foot higher for dunks), 2x 3-pointer, and lightning ball (next shot is unblockable). 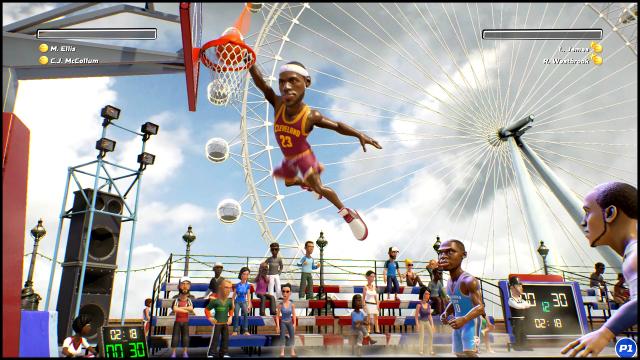 All this adds up to a basketball experience more strategic and cerebral than Midway's basketball classics. That's the good news. The bad news is that the game is less accessible than old-school titles like NBA Jam and Hangtime. This holds true especially with Playground's fussy shooting mechanics. Players must press and release the shoot button with precision timing; otherwise the shot will land too early or too late and net zero points. It's a system surprisingly finicky for an arcade pick-up-and-play title, and made more frustrating by different shooting animations for each player.

Since Playgrounds has so many moving parts, a practice mode would have been a huge bonus. Unfortunately, the game has none; only a brief, perfunctory tutorial that leaves many questions unanswered. 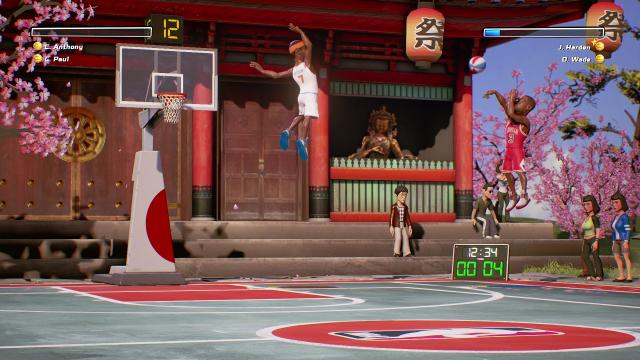 In the absence of a robust tutorial and a practice mode, players will need to submit to a process of trial and error. The upside is that you'll be rewarded for doing so with experience points (XP). After finishing matches, a player's profile will earn experience points, as will individual basketball stars. With enough XP, stars will gain new moves — although the nature of each new move is unclear. As players jump ranks within their profile, they'll unlock new card decks, which fill out the game's impressively deep roster.

Card decks arrive with randomized superstars from the past and present, including Allen Iverson, LeBron James, Stephen Curry, Shaquille O’Neal, Russell Westbrook, James Harden, Magic Johnson, and dozens more. Opening each pack and flipping each card to reveal the mystery star underneath is a fun, suspenseful way to earn new players (duplicates are recycled into player XP). It's a system vulnerable to micro-transaction abuse, but so far developer Saber Interactive hasn't flirted with the idea. All players are earned by leveling up. 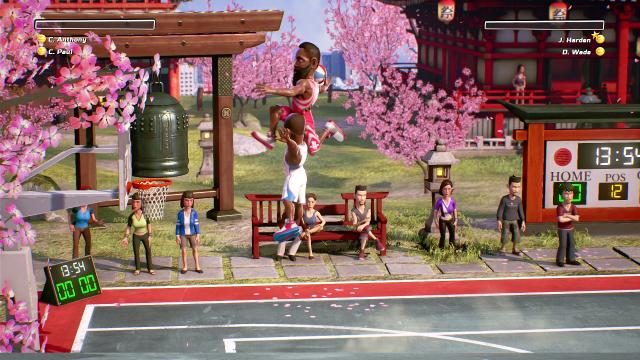 The Switch version of NBA Playgrounds features all of the game's four-player local multiplayer and single-player options, including Exhibition and Tournament, but lacks the online play of the versions on PC, Xbox One, and PS4. Saber has promised a patch to enable online play on Switch and also online tournaments across all versions. Missing online functionality, along with some fuzzy graphics in portable mode, make the Switch version appear inferior technically to others on the market — at least until a patch arrives.

NBA Playgrounds is not the next NBA Jam. It's neither as comprehensible nor as democratic in its design. Yet the move away from accessibility has yielded a game richer in tactical decision-making and risk-taking. Fussy shooting mechanics and some missing modes neutralize the overall experience to a degree, but the game's strong moment-to-moment gameplay keeps it afloat. With enough practice and patience (and patching), Playgrounds could be a perennial crowd-pleaser.

This review is based on a digital copy of NBA Playgrounds for the NS, provided by the publisher.

I have quite a few problems with it (not gonna list all of them here) but one that bugged me was how fuzzy the resolution is in portable mode. This game strikes me as a rather (as of right now) lazy port, but given that it was obviously made with the PS4 in mind and managed to release simultaneously on the Switch, I suppose a little patience is warranted. Still, the visuals are needlessly poor when in portable mode, so I hope that's improved eventually.

Also, dear lord the load times. How can such a simple game that's downloaded straight to the console possibly require half minute load times? Wtf is it even loading?

Thanks for the review. I hadn't heard of this game before now and enjoyed reading about it. I loved playing NBA Jam and could see this being just as fun if there's friends over.