Night in the Woods is the story of Mae, a recent college dropout who has come back to her hometown of Possum Springs, presumably to decide on her future following this life altering event. Night in the Woods is an adventure title in which you spend each day talking to various different characters, as well as completing certain side tasks around the town.

Running around town as a cartoon cat talking to different anthropomorphized animals makes Night in the Woods’ gameplay loop feel like a very depressing Animal Crossing, and although the presentation makes Mae’s hometown a joy to explore, the town of Possum Springs has certainly seen better days. The mines and factories that once employed the bulk of its residents have closed down and those residents who remain try to scrape by a meagre existence. Mae’s dad is the perfect embodiment of this, often bringing up how difficult it is to bring home the proverbial bacon while working at the local grocery store. 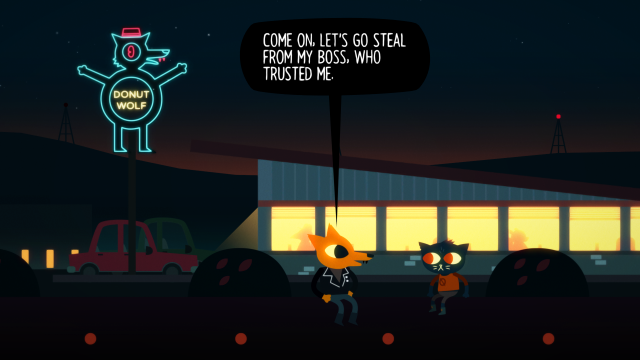 There’s a line that really hit me in which Mae’s dad talks about how the jobs he can get now don’t respect him as a worker. A job is meant to allow a person to provide for their family, but that is no longer the norm. While those who disagree with this point of view may find the labor narrative tedious, I really enjoy it when video games delve into more genuinely mature themes. As a 32 year old with a family of three to try to provide for, the plight of Mae’s dad was particularly poignant for me.

Talking to other Possum Springs residents is probably the best part of Night in the Woods. It really nails the feel of small town woes and the fight between employee and employer. Possum Springs is a particularly important landmark in this conflict, as decades ago a workers’ union strike led to the police accidentally shooting some children as they delivered food to their parents on the picket line. Learning about each character’s life and how they've come to terms with who they are and what their town has become kept me playing even when the game had devolved into simply walking through town to check on every character. Personally, I could probably spend the entire game wandering around and learning about how shitty and depressing the residents’ lives are, but that's not all there is to Night in the Woods.

Soon after Mae returns home to hang out with her childhood friends the group happens upon a severed arm outside of the diner. This event exemplifies two key features of Night in the Woods: the overarching narrative of mystery and dread that accompanies the town’s overall feel, and the mini-games that are used to break up what would otherwise be a 'walking simulator', as games of this type are often caricatured. These mini-games typically involve simple tasks such as poking an arm with a stick, sneakily pocketing pretzels without the cashier noticing, or taking a slice of pizza, but there are two notable exceptions. 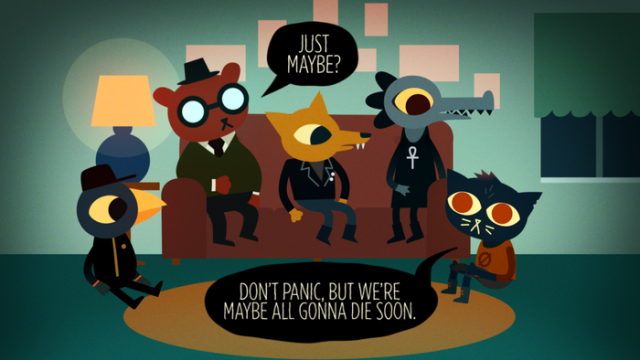 The first is a game Mae can play on her computer which reminds me of a simplified version of the 2D action games that are so common on digital distribution platforms lately. Each level is a simple arena consisting of 9-12 rooms and a side room that contains a key in it somewhere to the boss stage. This mini-game is a fun distraction and the difficulty curve is generally well paced as you lose max health each level but gain more mobility options. It gets a little ridiculous near the end when you're down to only three hearts of a previously possible eight, but until that point the ramping difficulty works well.

The other notable mini-game is a Guitar Hero-esque bass game in which Mae joins her friends’ band to play a song. It was a perfect choice by the developers to have Mae play bass as it gives you a chance to figure out the repetition of the song even though you only have one try at it. One notable problem with this mini-game is that there is no voice acting and so the lyrics of the song simply play in subtitles while you try to play the bass, which is a bit disappointing. From what I could catch of the lyrics they were well thought out and made sense for the characters, but it's difficult to follow along with both the subtitles and the bass line at the same time. 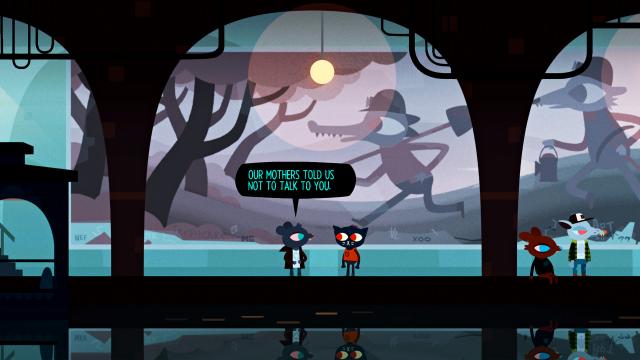 While the mini-games are a fun distraction it's Night in the Woods’ overarching mystery narrative that will likely keep you coming back for more. Having these tense moments juxtaposed against the everyday discussion of the mundane gives even these extraordinary events a layer of authenticity. Mae and company do their best to shrug off seeing an arm in the street, and joke about later dangers in a way that perfectly matches their characters. I can’t say that I found the climax of this mystery narrative as satisfying as I had hoped it would be, and I think it left a little too much unexplained, but overall Night in the Woods succeeds in placing completely believable characters in insane situations while keeping them grounded, which is a feat unto itself. It’s a unique and entertaining 7-8 hour experience that suffers a tad from lack of replay value, but I fully recommend a purchase at the current asking price.