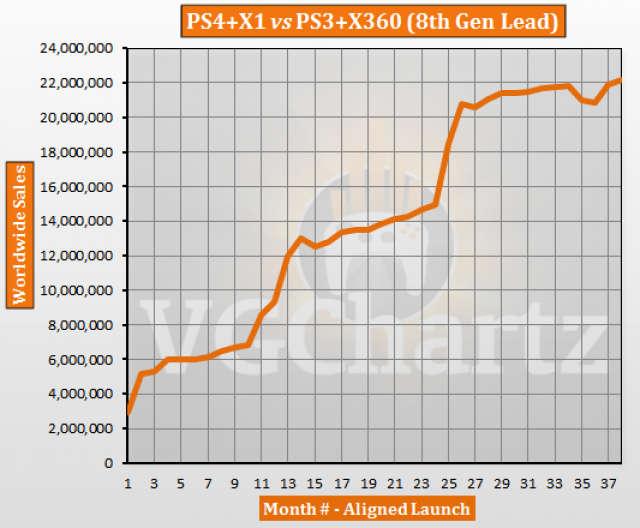 What am I supposed to be seeing with a single line going across a chart?

PS360 should take this in the end. PS3 and 360 combines sold about 170 million units. If we assume that PS4 sells as well as the Wii, then the XBone would have to sell about 70 million to make up the difference. At its current rate of about 8 million per year, it would take a little over five years to get there. Not going to happen. The only other scenario where PSONE comes out ahead is if the XBone continues on its current trajectory, and the PS4 sells 120 millionish... That would require selling at its current rate for just under 4 years. Also unlikely.

If the Xbox One is going to sell above 10 million units a year and the PS4 keeps selling at least 15 million units the coming 4 years it's bound to be close.

The XBox One isn't selling 10 million a year yet. Maybe Scorpio will push it up to there, but I don't think it could stay there for more than a year.

If the PS4 was still selling 15 million in 2020, that would mean sales only dropped 12% from the beginning of the fourth year to the end of the seventh year. By comparison, PS3 was down 35% in that timeframe. 360 was down 54%. So... PS4 only dropping 12% in that timeframe is incredibly unlikely.

Yes but this entire gen us like nothing we have ever seen before to begin with. The new midgen upgrades could actually increase the momentum of the sales on both 8th gen consoles. I wouldn't be surprised if the pro and PSVR will give PS a great boost in 2018 if they are both accessible for the masses in therms of price and content. Perhaps sales will drop massively but currently 8th gen still has a comfortable lead and I don't see that changing anytime soon.

Actually, it should start changing next year. That's when the PS3 hit its stride, and the Kinect came out for 360. Pro and VR aren't going to boost sales that much since they are expensive and appeal to the hardcore. Scorpio likely won't either.