Getting big names to craft brand new games is becoming quite a trend of late, with multiple high profile developers taking their talents and setting up shop outside of their usual comfort zones. With this in mind, have the makers of Metroid Prime and Keiji Inafune married up to successfully produce a stellar platformer? Unfortunately, as with most things in life, the answer isn’t a simple yes or no.

First, let's talk about what ReCore gets right. 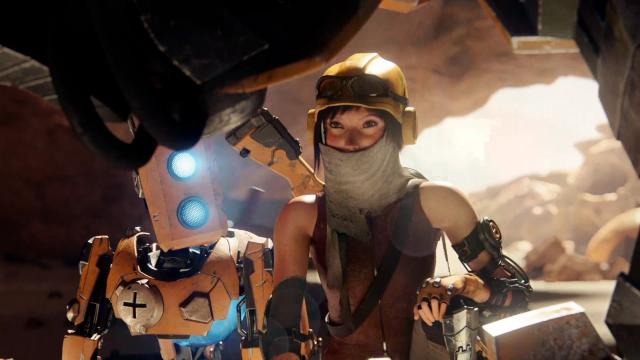 The story, despite being fairly sparsely presented, is actually quite deep. You play as Joule Adams, an engineer who has awoken from cryo-sleep on another planet. In this universe the Earth became inhospitable as a result of a catastrophe and 'Corebots' were sent ahead of time to terraform the planet that Joule now finds herself on. Things have obviously gone awry, however, as a number of Corebots attack you on sight. There aren’t all that many cut scenes in the 15 or so hour campaign, instead most of what you learn about this strange universe is told through text logs that are hidden throughout the largely open world and Joule's own narration.

ReCore also features strangely great core battle mechanics. Combat is simplistic but surprisingly enjoyable - Joule has a gun which can change between burst mode (pressing right trigger to fire like normal) and charge mode (hold down RB to charge up a massive shot). Over the course of the campaign you’ll discover new mods that allow you to change the colour of the shots you fire in order to match the different coloured enemies you'll encounter, which adds a layer of strategy and complexity to battles. 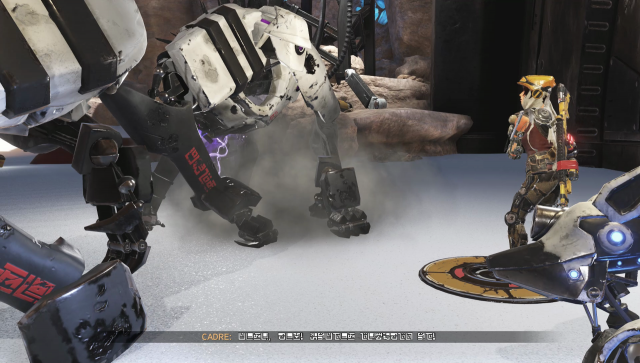 Alongside your weapons are your own trusty Corebots, each of which has its own unique abilities. These abilities have different strengths and weaknesses, and it’s up to you how you best utilise them. I found, for example, that I typically used the gorilla's pounding ability during fights, as its sheer strength helped to make quick work of the many foes encountered.

Additionally, you can swap the Corebots' cores around, or even create brand new bodies. This gives a sense of customisability to the game and you're given full flexibility as to which ones you level up and which ones you then take out in to the world. 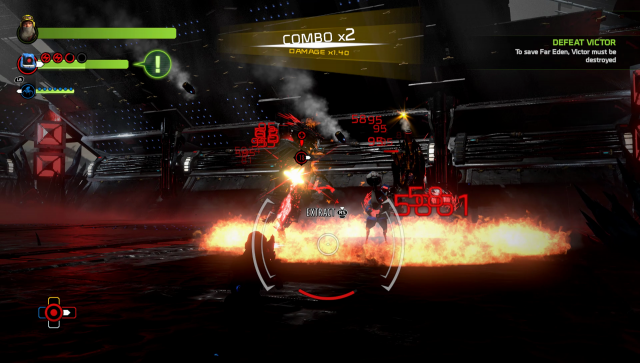 Traversing the environment is also a delight. Your ability to double-jump and boost in any direction helps to make movement through the world enjoyable right from the very start of the game. Entire dungeons are even dedicated to taking advantage of this manoeuvrability, so it's crucial that the platforming challenges all feel fair and achievable, which they do.

A good sense of movement is key for another reason, namely that the world of Far Eden is an enormous, sand-covered land that is open for you to freely explore from the offset. You’ll notice power-ups or hidden chests in the distance, and it's up to you to discover how best to navigate to those locations and obtain the items. The fact that ReCore is an open world game also means you can explore to your heart's content, take on challenges, or simply focus on the main campaign - it's entirely up to you. 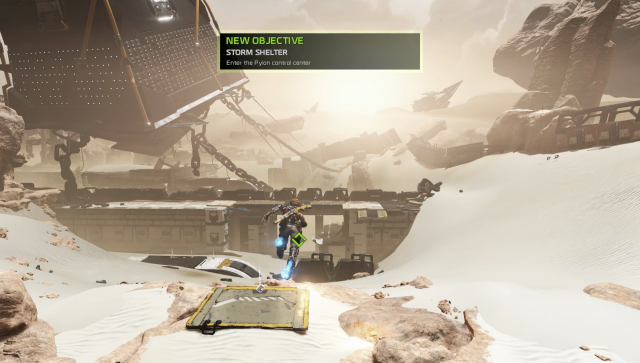 The dungeons you find throughout the world are interesting to explore and come in different forms. Some are arenas, where you take on large groups of tough enemies in a tiny room, while others are, for example, obstacle courses which you must navigate as quickly as possible. Each dungeon has multiple side objectives too, and these will challenge you to replay each one multiple times if you're the completionist type.

There is however a glaring issue with all of this: grinding. I personally felt I had spent a lot of time exploring the world at a fairly leisurely place, experiencing all there was to offer, so much so that I was always comfortably ahead of the minimum requirements for dungeons and campaign missions. So it came as a huge surprise to me that, after just 6 hours, I reached the entry point to the final area of the game. Not only that but I couldn’t progress until I had achieved 45 (of the 80) main objects and was at least level 28. I was by this stage only level 18 and had completed 20 objectives, which meant I was forced to re-explore the world again just to find things I had previously missed. 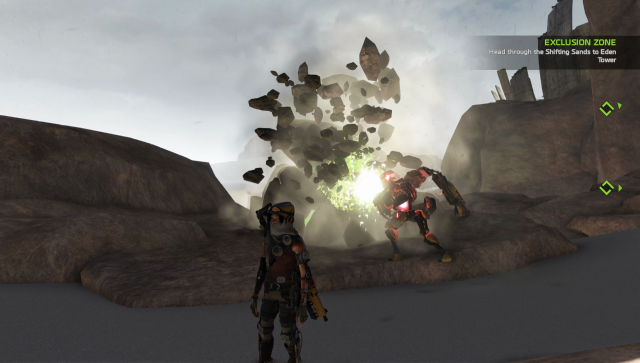 When I say grinding is a massive problem with ReCore, I'm not nit-picking or exaggerating.

I completed the main campaign after 15 hours, which sounds pretty decent for a game of this nature, but a whopping 9 hours of that consisted of retreading old ground, fighting the exact same monsters I'd already killed in order to level up to an arbitrary number required by the end game sequence. It’s hugely annoying that, while for the most part ReCore's campaign lets you do what you want, whenever you want, the end game turns this ethos completely on its head. If it wasn’t for the fact that I was reviewing the game I honestly may have given up long before completion simply because it was starting to feel like a chore rather than a delight.

The relatively bland visuals and lacklustre music don't help matters either. ReCore is actually Microsoft’s first 'Xbox Anywhere' game, so I took full advantage of my PC setup and played the game on ultra graphics with beyond full HD resolution, so as to ensure that technology wasn’t a factor in determining how pretty the game was. Unfortunately, it has to be said that ReCore genuinely looks dull. The screenshots may look full of detail but they're somewhat deceptive; each rock and piece of metal in the game world has the exact same texture, which results in an environment that quickly becomes repetitive. 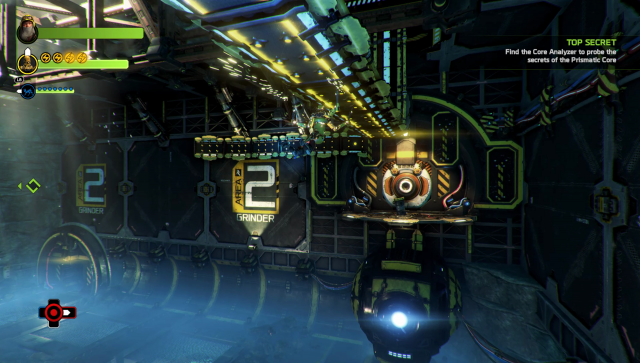 And the bugs! Oh the bugs I encountered. There were multiple occasions where I would need my Corebot in order to progress, only to find that it had glitched and wasn’t able to move, forcing me to restart the game entirely. The final boss also tested my sanity, - I came across three different bugs that meant I had to defeat the final boss five times before I was actually allowed to see the ending. What should have been a five minute encounter turned into a boss battle that lasted the best part of an hour purely thanks to it disappearing, or the cut scene failing to trigger.

Furthermore there's a more general problem of inconsistency. Sometimes you won't be quite sure whether you should actually be in an area or not, or whether certain terrain can be scaled or not. For example, most rocks in the world can be scaled, but some stick out so far or feature some odd angles that cause Joule will fall down them, despite them apparently being climbable. 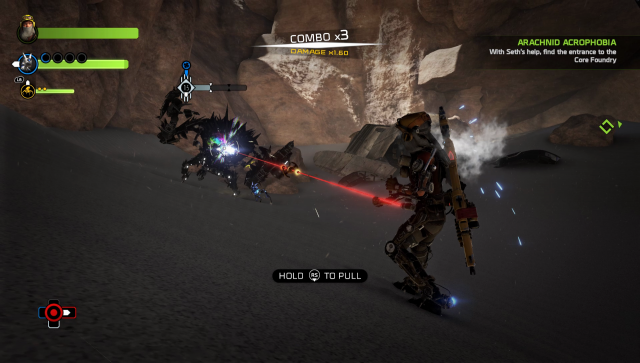 It’s a shame that ReCore has as many flaws as it does, as Armature has done a great job of nailing the sense of movement and combat mechanics used throughout. ReCore is chiefly let down by two things - a preponderance of bugs and a frankly unacceptable amount of repetitiveness. I can’t help but feel this latter point in particular is the main reason the game is only retailing for $40 instead of the standard $60. Longer does not always mean better and unfortunately ReCore is one of the best examples of this maxim so far this generation.

A graduate in Computing which was centered around Gaming, Dan is a games developer and writer. His first game, Twixel, was released for iOS, Android, PC and Mac in 2015, with the Steam a release coming November 18th, 2016. A lover of all things games, Dan has been writing for VGChartz.com for over 2 years, attending conferences and interviewing developers to get the best content for VGChartz readers. His favourite games include Asura's Wrath, S.T.A.L.K.E.R and the Halo Series. Dan can be followed on Twitter at: @Caesoose

This review is based on a digital copy of ReCore for the XOne, provided by the publisher.

Seems like ReCore had some great core mechanics and a good story, but was held back by some modern-day design sensibilities that really didn't belong in the game. Too many games pad themselves out, perhaps because gamers' standards have changed so much in regards to things like game length. For all we know the devs might have added a lot of repetitive missions to artificially extend the game's duration in order to avoid criticisms of it being "too short." Or maybe not. But too many games these days overstay their welcome because the player needs to do things like grind out stats or engage in ill-conceived collectathons. Not every game needs RPG mechanics or skill trees or what have you, and there's no real reason for an 8, 15, or 20-hour game to be padded out to be twice that in order to meet some arbitrary standard of game length.

I bet this game would sell a lot if it were short.

The main character reminds me of Rey from Star Wars

So much for Inafune redeeming himself. -_- 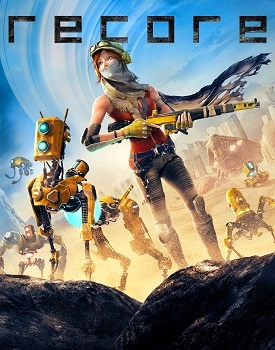