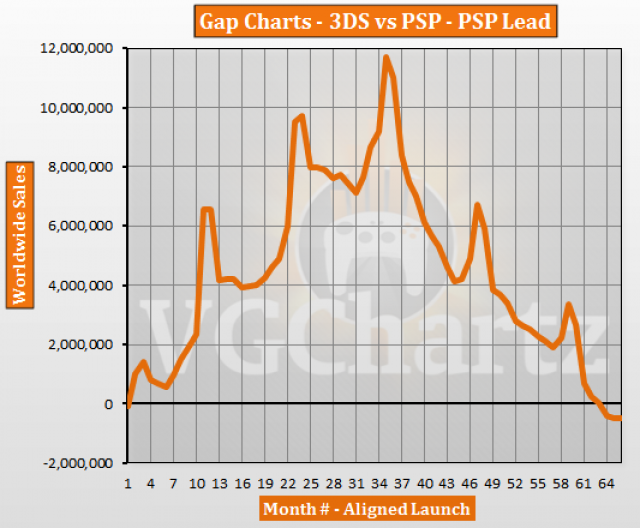 An important note is that the two handhelds launched at different times of the year. The PSP first launched in December 2004, while the 3DS launched in February 2011. The 3DS has sold 58.99 million units in its first 63 months, while the PSP sold 59.46 million units.

The PSP is going to win this battle but what a great and interesting battle it's been. Great comparison!

The 3DS will regain the lead for a short while now due to holidays not being aligned.

I thought 3DS and PSP both launched early in their years?

As the article says, the PSP launched in December, the 3DS launched in february. This can be seen in the graph as that's the reason for the spikes you see. The 3DS gets its holiday shortly before the PSP then get its holiday.

Ah, right. My memory is hazy on it as PSP is one of the few systems I didn't get at launch.

The (distant) 2nd seller of last gen is actually ahead of the (clear) 1st seller of this gen.

Mobile gaming has also hurt home console sales. Nintendo will barely reach 20 percent of what they sold last generation and PS4 and Xbox One combined will not reach the sales numbers of PS3 and XBOX 360 (at their current sales rates). It is a down generation all around.

I guess last gen was an outlier. Lots of people jumped from the Wii to one of the HDTwins and from the X360 to a PS3, that's why I think the number were a bit inflated.

I am uncertain if you are trying to say what I think you are saying so I am unsure if what I am saying will apply but...

There is only one of two ways you can look at what mobile gaming's impact:
1) It affects all console sales
2) It has no affect on console sales.

You cannot say, it affected hand held sales but had no impact on home console sales when the drops are abut equally extreme. Either mobile gaming hurt them all or that was an outlier generation/this is a down generation. You cannot have it both ways because then you are neglecting the whole picture.

I understand, but do not agree.
In my opinion, mobile gaming did not hurt home consoles sales that much.

Then I could be wrong and people are actually shifting from playing on home consoles to phones.