In space no one can hear you scream. But they can sure hear you complain. Since it was announced at E3 2015, the spacebound shooter Metroid Prime: Federation Force has come under withering criticism from fans. Many lamented the absence of a "true" mainline Metroid game, denounced Federation Force's focus on shooting and multiplayer, and, most embarrassingly, created a Change.org petition to scrap the game altogether. While it's true that Federation Force is the game for which no one asked, it turns out it's solidly constructed and undeniably fun. 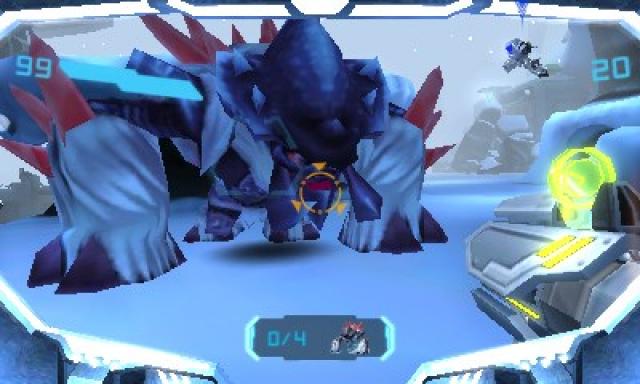 From the very beginning of the game it’s obvious how much developer Next Level Games respects the Metroid canon and source material. This is a studio that’s been given bigger and bigger Nintendo properties with which to work – first Punch Out!, then Luigi’s Mansion, and now Metroid – for a reason. Nintendo brass trusts them to deliver a quality game on brand. With a few exceptions, most notably the super-deformed character models, Federation Force looks, sounds, and feels like an addendum to the Prime trilogy.

In one important area, controls, Federation Force’s affinity for Metroid Prime might be a little too close for comfort for some players. Those looking for a dual analog experience should look elsewhere. Moving and aiming in Federation Force, as in Metroid Prime, is done with a combination of analog stick and shoulder buttons. The analog stick moves marines forward, backward, left, and right. With the R shoulder button depressed, marines can look around using the gyro sensor on the 3DS. While looking, they can lock onto enemies with the L shoulder button. 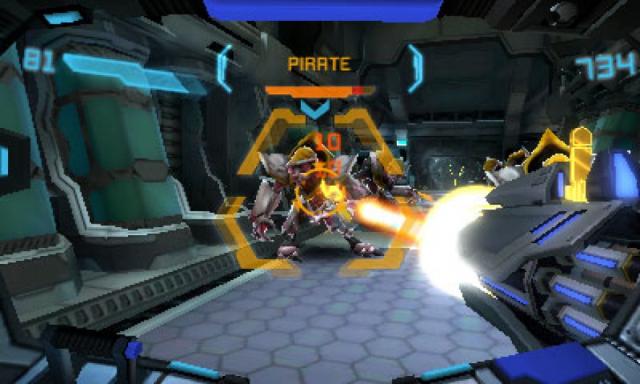 It’s not an elegant control scheme, and it presents a steep learning curve for the uninitiated or anyone who’s uncomfortable straying too far from dual analog. New 3DS owners can use the C nub to replicate a second analog stick, but it’s still an imperfect system. The good news is that after a few missions the controls become more natural and precise, and players, using the lock-on function, can pick off even the peskiest targets without needing to wave the 3DS wildly back and forth.

Despite a control scheme that recalls the original Metroid Prime, players shouldn’t go into Federation Force expecting a typical Metroid adventure or they'll risk severe disappointment. While this spin-off shares many qualities with Metroid Prime and its sequels – data logs, dangerous wildlife and environments, exploration, first-person shooting, and power-ups – make no mistake; Federation Force is a squad-based shooter. Up to four players, playing locally or online, can take on a number of missions across three planets: Excelcion, Bion, and Talvania. 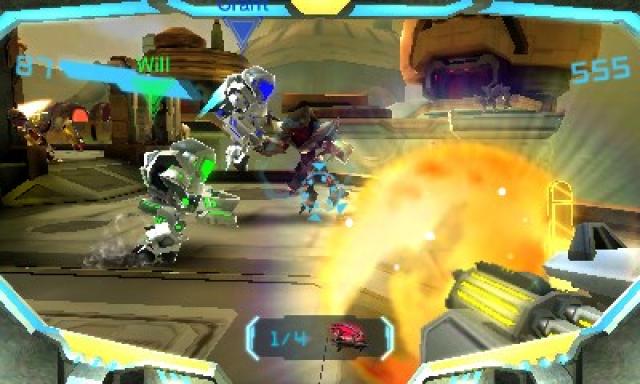 Missions come in many forms. At times players will need to escort a shipment of minerals or defend a drill. At other times, players are tasked with destroying a Space Pirate installation, defeating a boss, or even capturing wild beasts. The diversity of mission types is a boon for Federation Force, not only because it makes the game less routine but also because it allows for a deeper level of customization.

Before marines are deployed on planet, they can accessorize with up to three “mods,” power-ups that grant passive bonuses in each mission. Mods can do everything from double the effects of healing items to increase splash damage to create a 30 percent chance that aux ammo will not deplete once fired. Depending on mission parameters (and on the make-up of your fire team) you might want to add a mod with a specific purpose. 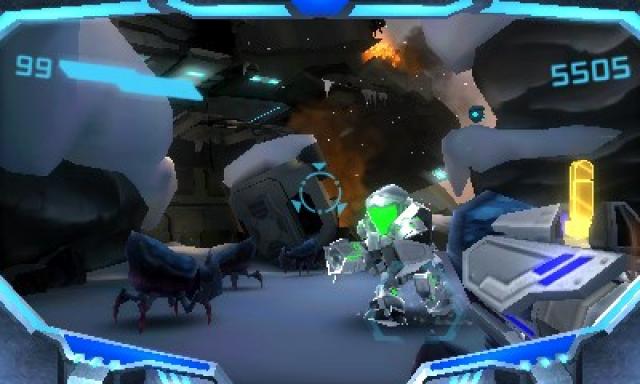 That’s not the end of customization, however. Just before touchdown, each marine can add several types of auxiliary ammo to his or her mech. If you’re heading to fiery Bion, make sure to bring Freeze Shot. Dealing with automated defense turrets on Talvera? Shock weapons are the order of the day. For the solo marine, there’s a nifty and hilarious decoy, which brings to mind the Decoy Glove from Ratchet & Clank. Only this decoy is the galaxy’s most feared bounty hunter.

Each type of aux ammo weighs a different amount, and each marine can carry only so much. So it’s important to plan ahead wisely, or hope to pick up the right aux ammo in one of the dozens of item boxes scattered across each planet. 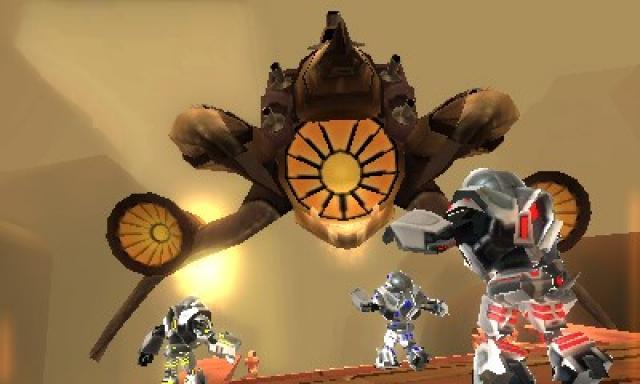 Federation Force can be played and beaten solo, but the title shines when played with friends. With teammates in tow, it’s far easier to achieve secondary objectives and par times, both of which earn points that translate to medals. It’s also easier to explore fully each map for item boxes and hidden mods.

There are a total of 22 missions in Federation Force, but the game continues long after the final climactic showdown. Players can revisit missions to find hidden mods and unlock perfect three-star ratings. When they finish the game, they'll unlock hard mode for every mission. Then there's Blast Ball,  a three-on-three mech soccer match, in which players shoot a ball into opposing goals. It's not nearly as fun or addictive as something like Rocket League but it's a neat diversion from the main campaign. 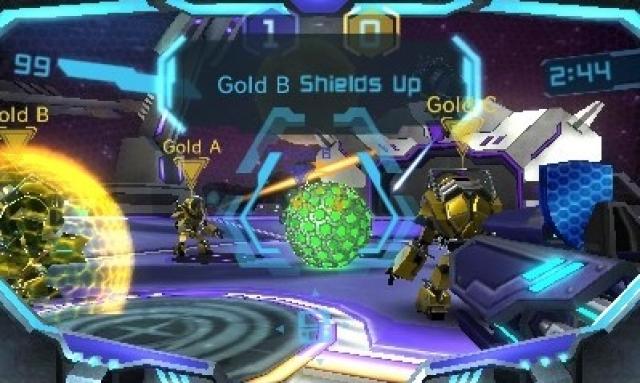 Federation Force isn't what Metroid fans expected, or wanted. It's not a 2D Metroidvania or even a slow-burning, atmospheric first-person action game focused on exploration, in the style of Metroid Prime. Yet it stands as a solid spin-off from a legendary franchise, rich in content and fun to play. Once you push past the unorthodox control scheme and super-deformed characters, you'l find a worthy entry in the Metroid canon.

This review is based on a digital copy of Metroid Prime: Federation Force for the 3DS, provided by the publisher.

The biggest problem with this game is the way it was presented to the people.
Instead of presenting it as a different take on the Metroid plot and focusing on its core action, it was presented as a casual multiplayer game. They even stressed that little ball multiplayer mode, something that was tottally unecessary.
The chibi character design don´t help either. Most people feel that it was more of a joke with the franchise than something else.
Sometimes, there are things like really bad marketing decisions. We cannot blame the players for their reaction and their lack of interest in this case.

I don't buy that excuse. Gamers overreacted this time. Simple as that.

they could've just made this the sequel to Hunters from DS

They better make it up to us after this.

I was kind of hoping this would use the same control scheme as Metroid Prime Hunters on DS. Kind of a huge bummer that they've taken a step back to the OG Metroid Prime.

Completely agree. The fact that this game does not have that as an option is very disappointing.