While Sony’s PlayStation 3 didn’t have the software catalog strength in numbers of its predecessor, by the end of its life it had gathered an impressive array of games that would eventually be seen as classics. One such eventual classic was Valkyria Chronicles, a game that quickly acquired a cult following thanks to its visual style and challenging tactical RPG gameplay.

Now that the series is being spiritually rebooted thanks to Valkyria: Azure Revolution for the PlayStation 4, Sega has also given the original PS3 title a visual upgrade in the form of Valkyria Chronicles Remastered for the PS4. Fans who loved the original game will feel right at home with this remastering, which is mechanically identical (for better or worse) to the 2008 game. Unfortunately, those looking for significant visual improvements may be left somewhat disappointed. 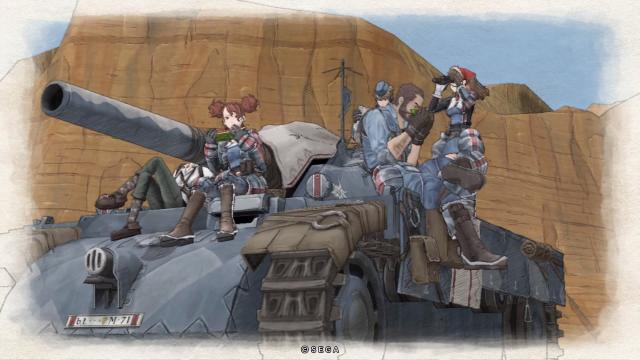 Valkyria Chronicles Remastered is set in the fictional land of Europa during a period loosely based on our World War II. The game's war (The Second Europan War) is between the Empire and the Federation, and hostilities revolve around the scarcity of a mineral called Ragnite. Ragnite is a valuable mineral that can be used for powering vehicles as well as for healing. The Empire has begun an all-out war of conquest in order to secure a better supply of Ragnite, but during its conquest of the Federation the Empire has also set its sights on Gallia, a neutral country whose soil is rich in Ragnite.

This sets the stage for Welkin Gunther and his fellow members of Squad 7 of the Gallia Army, who must fight back against the Empire and drive it from their homeland. The story is very anime-like, which although not necessarily a negative, does nonetheless mean it includes its fair share of predictable plot twists and romantic entanglements that can be seen coming from a mile away. Still, this predictability doesn’t make the story any less enjoyable or charming, and most of the characters are likeable and will grow on you as the story progresses. 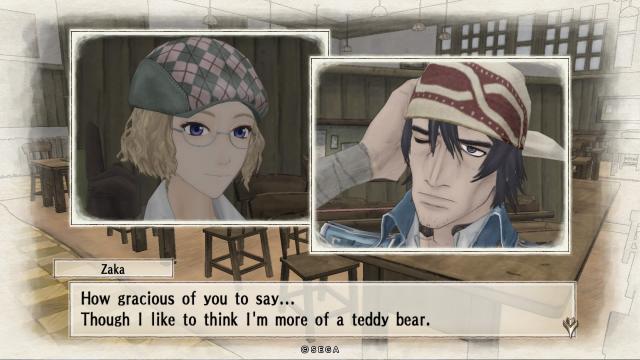 While Valkyria Chronicles Remastered’s story is an enjoyable adventure, the game’s real bread and butter is its gameplay focus on strategizing and implementing tactics in semi-real time. The game gives you direct control of your units, allowing you to position them for an attack or put them behind cover, but there are various limitations on how you can use your units in the form of Action Points (AP) and Command Points (CP).

In Valkyria Chronicles Remastered, CP is the “currency” used during your turns to allow you to command your units. When the CP runs out (or is saved for your next turn) then your turn will end and the enemy's turn will begin. AP on the other hand is directly linked to the units being used and determines how far they can move. The distance allowed varies depending on which class is being used and if you have already spent CP on the unit during the turn. These two systems force you to develop a decent strategy in order to successfully complete your objective with the limited resources at hand and leads to some of the most enjoyable experiences of the game.

Unit placement, and utilising the correct class or even the correct unit, can make or break a successful mission in Valkyria Chronicles Remastered. While enemies can’t attack normally during your turn, this doesn’t mean they aren’t a threat. Idle characters will attack if an enemy crosses their path and moves into their range of fire, which makes unit movement an even more important piece of the gameplay puzzle and is vital to keeping all of your troops alive. 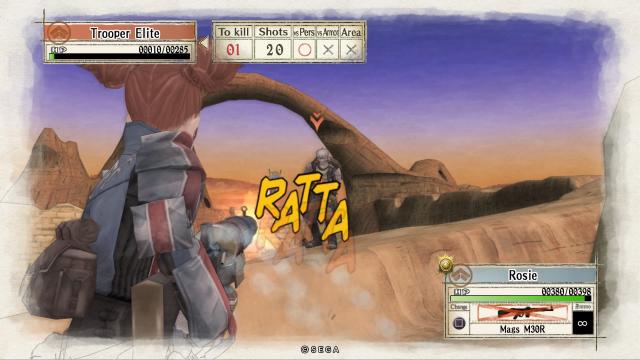 Which brings me to my next point - perma death is a feature in Valkyria Chronicles Remastered. If a non-storyline unit is taken down during battle it will be in a critical state, which leads to the permanent death of the character within three turns. You can save them from this fate via a battlefield medic (who happens to be Fina from Skies of Arcadia) if you are able to reach the fallen unit before the three turn time limit is up. While I’m generally not a fan of permanent death, the leniency of the mechanic in Valkyria Chronicles Remastered makes it feel quite fair. This feature also makes missions much more intense.

While the overall gameplay is extremely enjoyable and often thrilling, this remastering sadly retains the broken mission grading mechanics of the original. In theory the mechanic is logical and seems well implemented, giving those who play well more money and experience. But unfortunately it's broken due to the fact that grades are solely based off of how many turns it takes to complete the mission objective. Because of this, the only way to get a decent grade is to rush the enemy’s base with a party made up of scouts and capture it. Those who avoid rushing or like to user other units are generally given a lower mission grade, which is unfortunate. 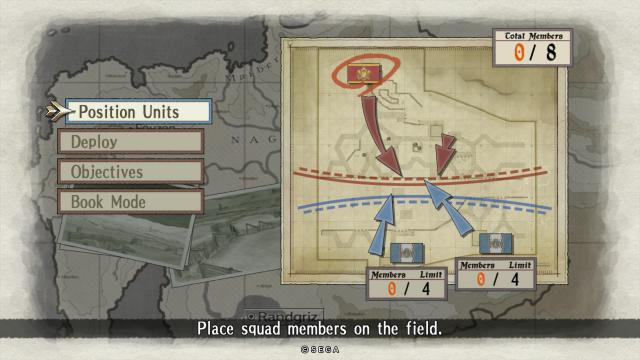 Many consider the original Valkyria Chronicles to be artistically one of the most beautiful games from the last generation and it is still extremely visually pleasing to watch and play thanks to the CANVAS Engine. Unfortunately though it seems very little has been done to improve the graphics over the original in this remaster; there are still jaggy issues especially when it comes to character models and hair. Valkyria Chronicles Remastered also has some minor and random pop-up issues during certain cut scenes.

Just as with the original the game features an exquisite soundtrack composed by Hitoshi Sakimoto (Odin Sphere, Vagrant Story). The soundtrack brings life and excitement to the battlefields, while its softer pieces reinforce the sorrow of more delicate scenes. Unlike the original game, which only featured the English voice cast, this remastered version includes both English and Japanese voice work. While I mostly stuck with the English track due to familiarity, the Japanese seiyuus felt generally on point, though it will take some time to get used to Alicia’s tsundere-sounding voice if you're not familiar with it already. 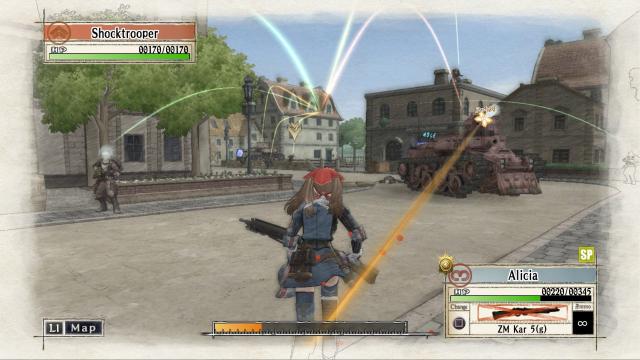 Valkyria Chronicles Remastered is quite the steal for $29.99 considering that the game’s main story takes between 28 and 40 hours to complete, depending on player skill. This version also includes all of the DLC that was released for the original Valkyria Chronicles, and although the DLC is a bit spotty in quality compared to the main game, the missions given are still quite challenging and mentally rewarding to complete.

Anyone who enjoys a challenging yet rewarding tactical RPG should set aside time to play Valkyria Chronicles Remastered, a game that may have no peer in the genre. While the remaster itself doesn’t add as much to the original as many will have hoped, that still doesn’t take away from the fact that this is a stylistically gorgeous game and one of the highlights of the last generation. Eight years may have passed but Valkyria Chronicles is just as whimsical and endearing in 2016 as it was back in 2008.

This review is based on a digital copy of Valkyria Chronicles Remastered for the PS4, provided by the publisher.

Valkyria Chronicles is one of the unappreciated gems from last gen. I highly recommend it especially at that price. Shame that they didn't fix the grading. It was one of the only issues I had with the original.

Great game and a bargain for around £17, Worth grabbing if you haven't played it before and also play it again if you already did back on the PS3 :P

one of my 4 favorite PS3 games, will get it again for PS4.

What are the other 3?

Missed this the first time around, but Ill make sure to amend this mistake!

Given that it's only 30 bucks and it was my favorite game of the previous generation, this one is a no-brainer purchase for me.

This game truly deserved so much more recognition and sales last gen but it just went under the radar besides the good reviews and love it got from its cult consumer base. I really hope it gets what it deserves this time. A must buy in my opinion for ps4 owners.

Play Behind Her Blue Flame, get the XXXX and let Rosie go ham. I will probably get this so I can finally earn some trophies for this masterpiece. But what I really want is remastered VC2 and 3 ported to PS4. But I suspect as PSP games those would require a lot more work to make them look decent on PS4.

Too bad the remaster has such minor graphical improvements. Everything else looks good to go. Will buy!

Good game with a awesome ending. i hope the best for Valykria Chronicles.