Time travel has always been one of the more interesting concepts when it comes to the medium of video games, at least for me personally. It’s a trope that allows characters to avoid fruitless futures and instead embark on a new timeline that may or may not end up being graver and more hopeless than before.

Stories: The Path of Destinies utilises this concept of different timelines quite liberally, giving players multiple paths to branch out into, each of which has its own unique ending. However, while the game’s branching storylines and use of time travel is one of its more prominent features, it is also a large contributor to one of its biggest faults; one which, unfortunately, tarnishes the untapped potential of Stories: The Path of Destinies. 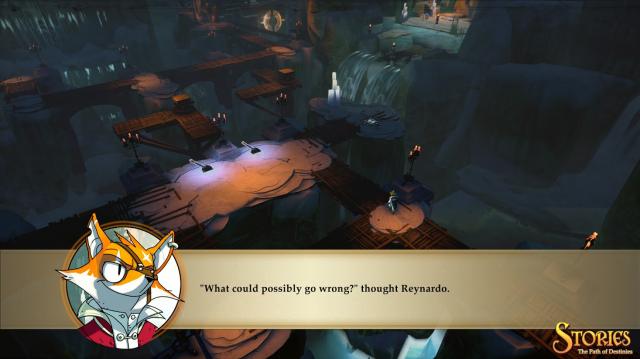 The game follows Reynardo the Fox, a former pirate who abandoned his swashbuckling career to settle down and satisfy his dying mother’s final request, but fate has other plans. Over the past few years the emperor of the islands - a once kind and chartable toad - has been turning evil. He now orders the murder and sacrifice of entire villages in order to appease the old gods and obtain immortality for himself. Through luck and the death of an annoying teen rabbit, Reynardo gains ownership of a magical book, one which shows its owner how their choices will play out. Thus Reynardo begins his journey to find a path that won’t end in his demise but which will save the islands from their terrible fate at the hands of the emperor.

Naturally, Stories: The Path of Destinies' storyline features multiple timelines - 26 or so depending on how you count them. The game splits these timelines into four categories, depending on what truth was learned during the timeline branch. But while two branches may have the same truth, their outcomes can greatly differ.

For example, during one branch I turned Reynardo into an enlightened hippie, but this ended with his head being chopped off while meditating before the emperor’s raven guard. Another branch in the same truth category ended up with me murdering my beloved, turning into a dark god, and altogether ending the concept of time. It’s quite interesting to see how some simple path changes can cause such different results, but while it's enjoyable to see them play out, the amount of repetitiveness the player needs to deal with from both the story and gameplay simply makes it not worth the effort. 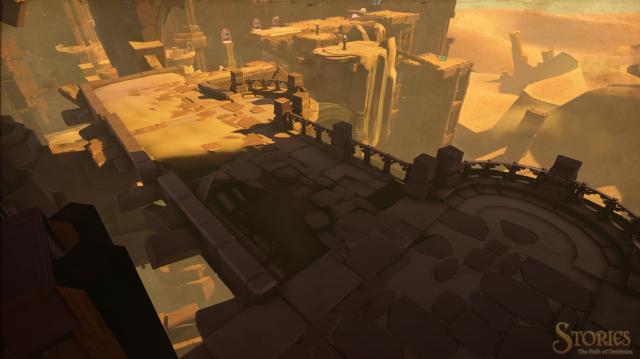 Time travel in theory is interesting when it comes to games, but without the proper tools it can prove to be a painful experience in reality. Sadly Stories: The Path of Destinies is very much lacking in those tools, which if implemented could have made the game a much more pleasant experience to play through.

One of the biggest issues that plagues it is the inability to jump to any previously completed timeline in order to change your decisions. Instead, the game forces you to go through every single level again, and listen to every single piece of dialogue you've already heard, just to reach the branching point that allows you to choose a new path. This can be extremely frustrating if your goal was to change only the final decision in a branch, because Stories: The Path of Destinies forces you to waste 10-20 minutes (if you speed through) on re-treading old ground in order to reach that single point of divergence.

Furthermore, whilst some of the cut scenes are skippable, a majority of them are not, and nor can you speed up already heard dialogue, all of which magnifies the problem. 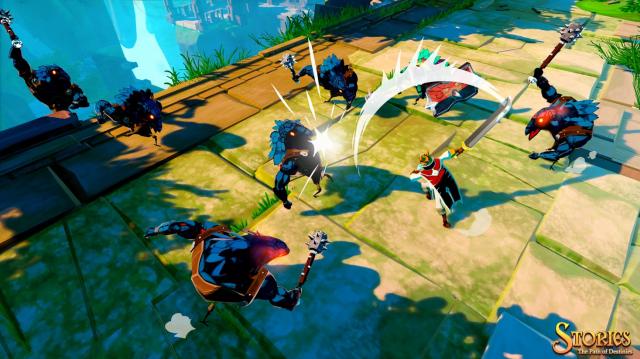 Combat gameplay could have helped soften the impact of the issues mentioned above, but it's sadly just as much of a victim of repetitiveness as the story is. Stories: The Path of Destinies at its core is a top-down isometric action game with some RPG elements lightly sprinkled throughout. Reynardo’s fighting style features a small arsenal of moves which include: attacking with his sword, grabbing enemies and launching them at their comrades, countering enemy attacks, dashing, and using his hookshot to grab enemies and forcing them over to him like Scorpion from Mortal Kombat.

There are also leveling and skill systems, a swords upgrade system, and the ability to add gems with special affects to Reynardo’s gauntlet, but none of these really do much to add any depth to the relatively basic gameplay.

Enemies are easily dispatched by repeatedly pressing the attack button and using some simple counters until they all die. To be clear, the combat gameplay is never bad, but it never becomes exciting or challenging either; a matter that is not helped by the low number of enemy variations. As such, well before you've completed five different timeline branches you'll have become quite numbed by the experience. 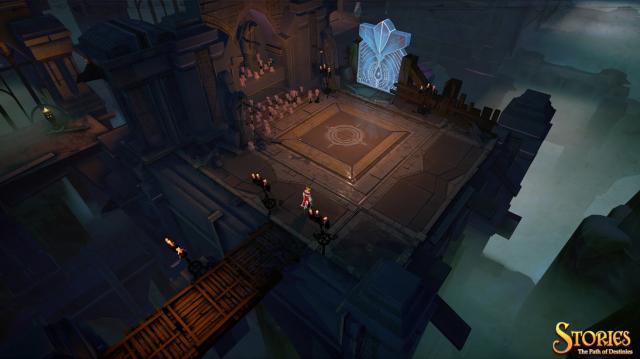 If the game's repetitive nature is one of its low points then one of Stories: The Path of Destinies' main highlights is strong voice acting. The story is told entirely by a narrator, and the same actor also voices every character in the game, from Reynardo to the emperor. Characters are often brought to life through slight vocal variations and the narration is consistently excellent, detailing events as they unfold and randomly throwing out commentary and sly asides (even if there are a few too many memes peppered throughout).

Stories: The Path of Destinies is also quite a stunning game. While it’s naturally not on a par with output from big budget AAA studios, Stories: The Path of Destinies is able to make good use of its art style and bright colors to bring life to a world of floating islands. Though this visually appealing world does include a few weird pop-up instances, inconsistent loading times, and some rare slowdown, this takes little away from the game’s visual prowess. 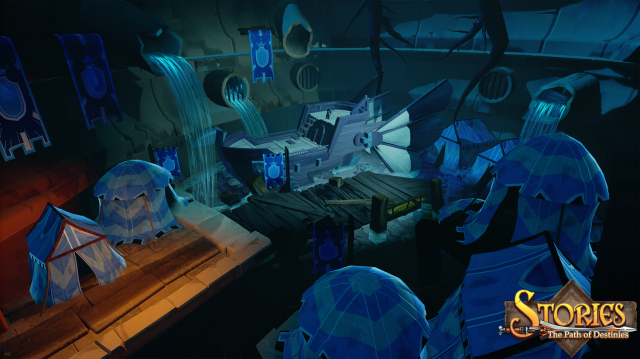 Stories: The Path of Destinies costs $14.99 ($13.49 for the first week) and the true storyline can be finished in roughly 3 to 5 hours (depending on how quickly you play through and whether you unlock the true path correctly). Since there are 26 or so storyline branches it should take at least 10 hours to one hundred percent complete the game, but quite how many players will be willing to deal with the mind numbing gameplay experience that will be necessary to attain the platinum trophy is another issue altogether.

Some of the more painful and disappointing types of games to play are those that have obvious potential but are unable to truly shine as a result of some preventable blunders. Stories: The Path of Destinies is unfortunately one of those titles. It has all the makings of a great game but, ultimately, there are just a few too many faults holding it back.

This review is based on a digital copy of Stories: The Path of Destinies for the PS4, provided by the publisher.