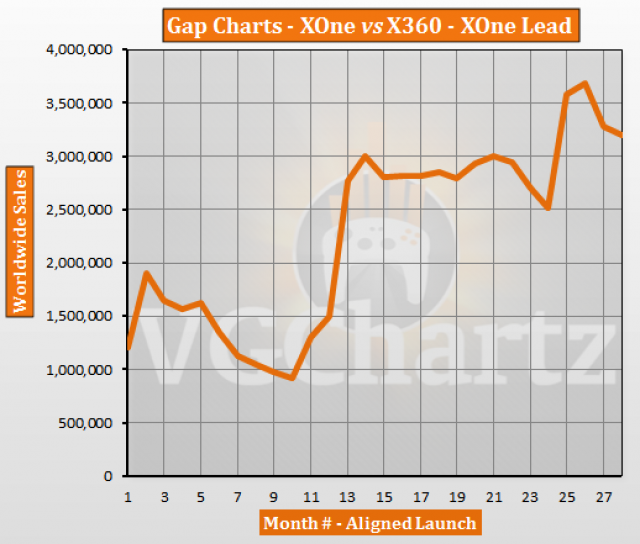 While the XBO is ahead of the 360 right now, it won't last. The 360 experienced a huge rebound in 2008 in Europe, growing 94% YoY. It rebounded because of aggressive price reductions by MS. The XBO has been performing in Europe about as well as the 360 did in 2006-07. The XBO will start falling the behind the 360 in Europe very quickly this year. If it doesn't grow enough YoY in the U.S. this year the gap may start to narrow globally. If the XBO peaks this year or next year (I think it'll peak once a $300 slim model is released), then the gap will narrow even more in 2018 when the XBO reaches the point in its life that the 360 was at when the 360S was released. That was the point when 360 sales in the U.S. finally started growing a good amount. The XBO is doing well, but we must remember that the 360 had the most belated peak of any console ever while the XBO will be a fair amount more front-loaded. The 360 will eventually overtake the XBO in this chart in the coming years. The 360 utterly dominated the PS3 in the U.S. (and is the #2 best-selling home console ever in the U.S., behind only the PS2) and managed to do decently in Europe, and those factors combined with a protracted generation is why it sold over 80 million units globally. I think the XBO will likely sell at least 50 million units lifetime, which is not bad considering its troubled beginnings and that two-thirds of its sales are from the U.S. & UK. It could have been a lot worse. Assuming MS remains in the console market, sticks to the normal console cycle, and doesn't make any big blunders, the Xbox v4 should be able to compete more evenly against the PS5.

XOne is doing great dunno why people are saying its doing so bad.

Because at the start of this gen, it was widely expected that Xbox One would dominate.

Because even the PS3 is selling better, and the PS3 sold terribly, according to fanboys last gen.

@kooltrex people are just finding excuses like the other two comments here.

First time I see this gap articles. Thought the lead was smaller.