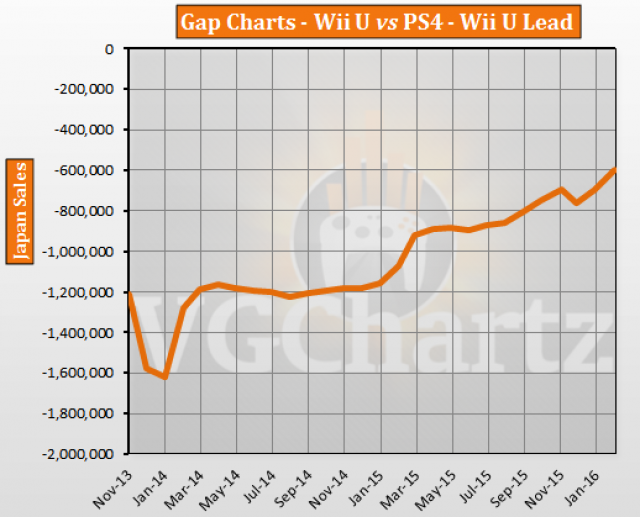 It's a given that PS4 will outsell the Wii U by the end of this year given the big gap in difference between their weekly sales and how many big Japanese games PS4 is getting this year.

The PS4 had a rough start. Not only did it release early in the year and thus hit baseline sales more quickly after launch than a system released during the holidays would, but its baseline in general in 2014 wasn't anything to write home about, selling under 10,000 units per week on average from May through October. But in 2015 it rebounded quite a bit; for the first three quarters of the year it averaged over 20k per week, and after getting its first price cut at the beginning of Q4, it started doing even better. Through the first ten weeks of 2016 it has averaged about 29k per week without any really big system-sellers. After a little over two years on the market, the PS4 has sold about 21% more units than the Wii U did in the same time span. If anything, this scenario should illustrate why overly simplistic comparisons of the "System A sold x% what System B sold" don't tell us much about future performance if we're just talking about sales in the earliest weeks and months. Many commentators latched on the PS4 having weaker sales than the Wii U in those early months, but here we are now with the PS4 doing substantially better than the Wii U did in the same point in its life and the LTD gap rapidly narrowing. The Wii U is likely past its peak now in Japan after rebounding a good bit in 2015, but the NX could potentially shake up the Japanese charts a good bit, depending on what kind of system it is.

I've been hearing about WiiU shortages in Japan so this gap will likely close eventually. In a related story, I've heard the WiiU gamepad has been put on sale alone without a console in Japan. NX-related functionality perhaps?

I've heard about the shortages too and I don't understand why Nintendo wouldn't ship more consoles if there's unsatisfied demand there...

People get a WiiU instead, because PC Gaming is quite big in Asia.

Not in Japan it isn't