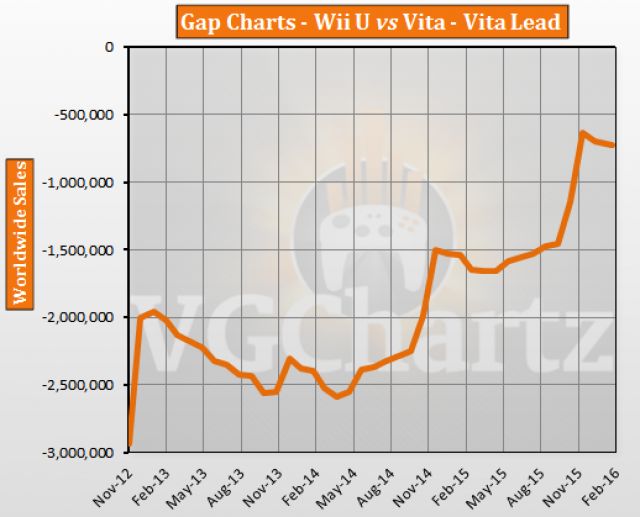 I think that in the end PSV will come out on top.

PSV is still killing it in Japan.

Glad to see Vita doing better than at least something. Definitely my favorite of the two.

The WiiU sells better during the holydays and after a Nintendo game gets released, while the Vita sells better every other moment. It would be interesting to see if the WiiU manages to outsell the Vita before the NX gets released, but considering that the NX announcement will make the WiiU sales drop like a rock, I'm not optimistic.

Seeing how Nintendo is limiting Wii U restocking in Japan I'm afraid Wii U won't catch up, of course there'll be restocking when titles like Star Fox or Zelda release, but in the end, there's only those two games (unless Pokkén proves extremely suxcessful differently from what it did in the Arcade version)

I think it's possible if the Wii U gets a significant price drop. The manufacturing costs have probably come down a lot so hopefully Nintendo drops the price before the NX is released.

Did ye notice that on the chartz here that the Vita has outsold the Wii-U every single Week of 2016, it's pretty crazy the comback, I remember a time when it was being outsold nearly 10:1 by the 3ds and now it's barely even 2:1 in favour of the Ninty handheld.

Vita had life in it after all. great to see, such a fantastic handheld.

VGChartz. I understand if you don't trusth those CESA estimate, but can you at least adjust the France sales?

Yeah and they should adjust the Vita up by about 200k in the US considering they haven't tracked the PSTV there at all.

This comparison aside, I like that the psv is still selling a little. Hope it reaches 15m

Sadly I don't know when was the last time we got REAL info on PsVita Sales outside of Japan.

It will reach 15m next year no problem.

A price drop for both is waaaayyyy overdue.

I don't think Nintendo is going to make a significant pricedrop at this point. After the NX announcement we might see one, just to try to get rid of all the unsold stock, but nothing really big.