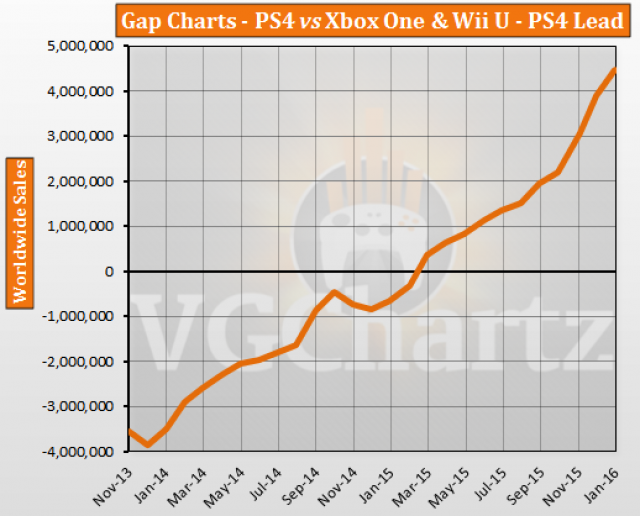 The gap has grown for 13 straight months in favor of the PlayStation 4 when compared to the combined sales of the Xbox One and Wii U. The gap in the latest month grew by 576,739 units. The PlayStation 4 leads by 4.46 million units.

What? the PS4 alone sold more than the Xbox One and Wii U combined? jeez.

I believe it's sold more than the One and 360 combined too. If not, it's really close.

@Skratchy yeah I think that I read that somewhere else too some months ago. This is like the PS2 era all over again...

@skratchy Yes it has sold more than the One and 360 combined.

@fabriciodel96 It isn't quite the same level of domination. The One is going to sell a lot more than the original Xbox

It was a good suggestion!

With the likely prevalence of Xbox One titles going cross-platform to Windows 10, I'm going to out Pachter, Pachter and predict that as soon as those first multi-plat games hit, we'll start seeing a rapid decline in Xbox One consoles sales. Existing software sales will remain steady because current X1 owners will buy the new Quantum Break, for example. But for gamers currently sitting on the fence trying to decide between buying an X1 or upgrading their PC, I think they will pick their PC.

Wow, a generation ago I wouldn't believe anyone if they said that Sony would have this large of a turnaround.

Personally I would have believed it, I mean the PS1 and PS2 were the most successful of their generation, the PS3 had a bad start because it was released a year after the X360 and it was too expensive, not to mention the economic crisis that affected many countries worldwide at that time so many couldn't even afford it. Years passed and the PS3 started to get more and more games that became very influential and well-known in the gaming industry like Heavy Rain (which popularized the "choice based game" genre that was later adopted by Telltale Games, Life is Strange, Until Dawn, etc), Uncharted (which was inspired by Tomb Raider and then the Tomb Raider Reboot took inspiration from it), The Last of Us (nearly 300 GOTYs won, thus becoming one of or the best award winning game of all time, with its gameplay serving as inspiration for RE Revelations 2, The Evil Within, etc...) and eventually in the end the PS3 won on sales, just by little sales difference like it says in the sales charts of this site. I'm not a fanboy at all, but even if the XOne didn't had that bad marketing at launch I'm pretty sure the PS4 would still be at the top of the sales.

I've followed and reported on the industry for nearly 15 years. I know all about the bad start for the PS3, it didn't help when Howard Stringer basically forced out the lead hardware/tech team from Sony shortly after the launch of the system.

All in all, to see this kind of dominance was not expected. No one within the industry felt this was possible. Even with Microsoft shooting themselves in the foot at their unveiling, there was still the potential chance of Nintendo pulling out another victory. As we hadn't seen everything from them in regards to their big franchises. But 2015 came and showed that the big dogs aren't able to move systems anymore.

Yeah I mean the problem is that the Wii was successful because of its innovative controls and stuff but some people become tired of it seeing as the "really big AAA graphic games" where most available on the other two systems. At least in NA territories (since I think in Europe and Japan the PS3 was still the most successful, along with the Wii) the PS3 was loosing ground against the 360 but Sony continued to support it until it released all of those critical acclaimed games that I mentioned before so the PS3 success was gradually coming back in that territory. I do believe that if it wasn't for the 3 reasons that I mentioned earlier (released 1 year after the X360, the expensive cost and the economic crisis) the PS3 would have started on pair with the X360 on sales at least. And in this generation Sony did the right thing at least with the marketing, while Microsoft was trying to sell the XOne as a "full entertainment box" Sony was marketing the PS4 as just a simple gaming console with not much things added, and that was another selling point for it, not to mention that even if Nintendo had successful consoles it also had unsuccessful ones or consoles that didn't sold the same amount as its competition, partly because of the "no violence, friendly family system" that they are most known for, and PlayStation was always successful since the first PS1 (not counting handhelds), while the first Xbox wasn't so successful either, at least on other countries outside NA. Anyways that was all just my opinion so I don't trying to be unfriendly or anything, let's see how the PS5 and Xbox "Two" start in the next generation some years later.