Two years ago, the announcement of Sonic the Hedgehog 4 brought joy to fans desperately clamoring for Sega to return Sonic to his Genesis day roots. When it came out, it was a mixed bag. The levels and music were solid, but many fans were up in arms over the (admittedly subpar) physics allowing for moments of goofiness, which did not at all feel like the Genesis Sonic titles. So, Sonic Team and Dimps returned to the drawing board, and now released Sonic 4 Episode 2. It is evident that they worked on the physics and momentum issues, as Episode 2 feels more solid than Episode 1. But things clearly went wrong everywhere else, from uninspired level design to an even wonkier homing attack than usual to ear-piercing music. Thus, despite the improvements, Episode 2 still falls flat. 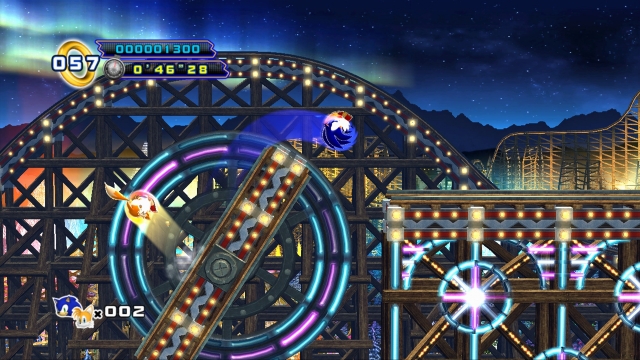 Metal Sonic makes his return to the series in Episode 2. Long thought to be defeated after the events of Sonic CD, Metal Sonic instead, with the help of Eggman, is back in the fray and teams up with the rotund villain to become a dual threat to Sonic and Tails. They must stop their nefarious plans!

Aside from the previously mentioned physics changes, the major addition to gameplay is the reintroduction of Tails. Mirroring the growth between Sonic 1 and 2, Episode 2 brings Tails along for the ride. The two team up for combination moves. On the ground, they become a giant rolling mass of destruction, and in the air, they can fly to higher locations, limited by Tails's strength to ascend. Underwater, Tails can move freely up or down. These abilities aren't intrusive and are an excellent new feature to the series. (And if you want to get Tails impaled on spikes, like you could in the good old days, that option is available to you.)

Four new zones are introduced in Episode 2, adding up to eight zones across both games (plus final boss zones), but these levels, when compared to Episode 1, are not as imaginative. There are a few bright spots, but ultimately these new levels are simple affairs that aren't likely to leave a lasting impression. The most clever idea: Sonic standing atop the Tornado airplane as it flies, is marred by awkward controls. There's nothing inherently bad about any of the levels, but that's about all the praise I can give them. 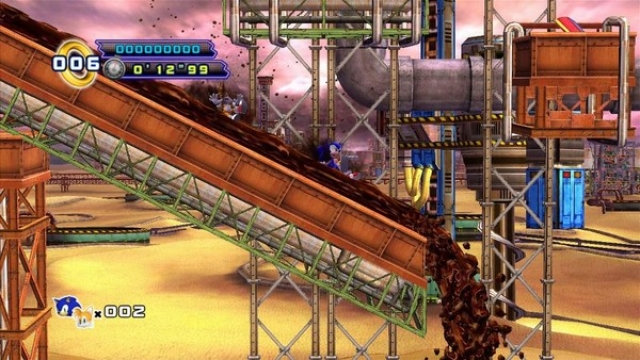 Boss battles alternate between duels with Metal Sonic and Eggman. It is a tale of two worlds. Metal Sonic's boss battles are rapid, dangerous, and require precision to defeat and it is when the game is at its best. Eggman battles, on the other hand, have their moments, but have an atrociously annoying ten-second techno tune that loops throughout each boss battle. Some of Eggman's contraptions take over twenty seconds just to set up before the battle begins, so that looping sound will quickly annoy you as your progress through each fight. The last two Eggman bosses are fun battles, I just wish I was deaf at the time so I could have enjoyed them more.

Speaking of music, the lack of good music in Episode 2 makes me scratch my head. Even when Sonic games were falling into the pit of despair, they still put out some good tunes to listen to. Episode 2 does not give us any awesome songs at all, and in fact, produces some awful ones. I've already covered the nerve-racking looping tune in Eggman fights, but the rest of the soundtrack is rather dull as well. Act 2 of Oil Desert Zone, in particular, is a synthetic mess of a song which sometimes sounds more like children screaming for help than a Sonic background track. I feel for you, screaming children, I do.

Graphically, the game is still as bright as the previous episode but has been improved. In particular the backgrounds look better and more engaging than those of Episode 1. Sonic looks a bit less toony than he did in the prior episode, but it's not an Earth-shattering change. 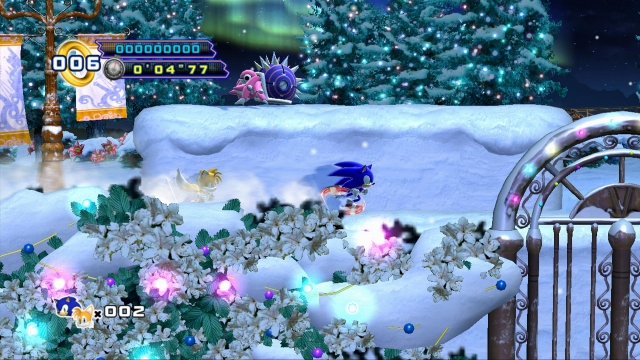 Like in Sonic 2, you collect Chaos Emeralds through bonus stages, which have Sonic running through half pipes trying to collect enough rings to pass checkpoints. It's the most famous of Sonic bonus stages and is still fun here, though Sonic is slow to turn left and right when you move the stick. That means more timing is required to move over to a new cluster of rings or avoid obstacles, and that can be very annoying in later stages when precision becomes key.

Co-Op is available as a multiplayer bonus, playable locally and online. This allows a second player to control Tails. Under the command of a player, Tails can become a much better asset to Sonic, picking up rings and power-ups (this is especially helpful in those bonus stages). There are online leaderboards for both singleplayer and multiplayer to prove who the fastest hedgehog really is. In addition, each level has a red ring for skilled gamers to collect. So while the game is short, there's still a little extra meat on the bones to make the $15 entry fee feel less daunting. But the game itself can still be beaten in just three hours, which has become a staple of Sonic games in recent years.

Purchasing both Episode 1 and 2 on the same system will unlock Episode Metal, which takes Metal Sonic through four of the levels of Episode 1. He's cool and suave, but doesn't play any differently than Sonic did in Episode 1, so this is merely a fun addition instead of a full blown game mode. 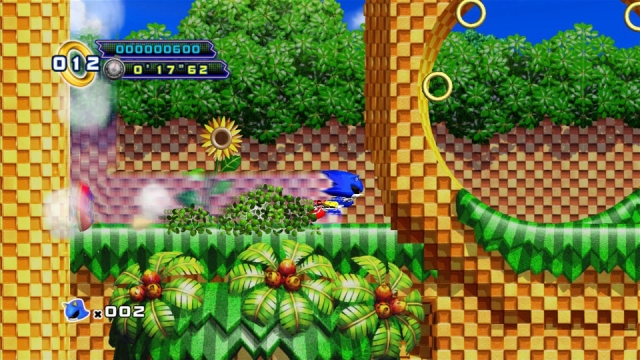 Ultimately, Sonic the Hedgehog 4: Episode 2 is a tale of one step forward, two steps back. The much maligned physics issues of its predecessors were fixed, but the controls became sloppier, the level design became more mediocre, and the music fails to compete with past Sonic titles. The diehard Sonic fan will still find value in Episode 2 and by no means is it a terrible title. But if you do not have an attachment to Sonic, this is not the game that will instill that interest.

This review is based on an XBLA copy of Sonic the Hedgehog 4: Episode 2, provided by the publisher.