Turn the tables on the towers!

Even a good genre can get tired. Tower defense swept the gaming world by storm for a brief time, but now it has become overloaded with titles trying to capitalize on that growth, leaving many gamers fatigued. Anomaly Warzone Earth puts a spin on it, making you the troops trying to destroy the towers. Many have nicknamed this "Tower Offense" and it's a nickname that fits Anomaly Warzone Earth well. Our own Matt Ashbaugh reviewed the game back in April when it released on Xbox Live. Now that it is available on the PlayStation Network, I decided to give it a try for myself. 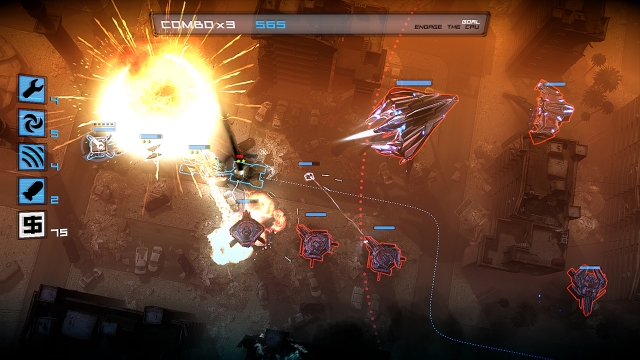 The story is simple; a bit cheesy, but it fits well in this game. Aliens have attacked Earth - notably, Baghdad and Tokyo - and have begun to take over the planet using strange force fields called anomalies. Inside those fields, the aliens have built up many towers capable of destroying armies in a flash. But we, the human race, cannot allow these aliens to take over our planet! It's your job to lead your squadron into the heart of the anomaly and fend off the alien invaders.

To do this, you must begin each level by purchasing armored units, plotting a path through the map, and then escorting your units through the dangerous alien territory. As the commander, you cannot directly attack the enemy, but you can run around the map. This allows you to pick up powerups, such as smokescreen (lowers tower accuracy), decoy (towers will target your decoy instead of your units), airstrike (call in a missile strike) and the all important repair (I think you know what this does). You have a limited health meter that regenerates automatically, so blindly running in front of towers is a bad plan. Careful maneuvering to pick up powerups without abandoning your units (which do not heal automatically) will be needed.

Basic units at the start of the game include the APC and the Crawler. APCs are your standard armor units with basic machine gun fire. The Crawler is more fragile but has high powered missiles. Over the course of the game's 14 missions, new units will be added, such as the Shield, which places a shield over adjacent units, and the Tank, which is like an APC with more attack and defense. During gameplay, you will get money from defeating towers and collecting money, which will allow you to either buy new units or upgrade existing units. There's a maximum of six units on the field, and sometimes six will be too many to manage effectively, so do not forget to upgrade. 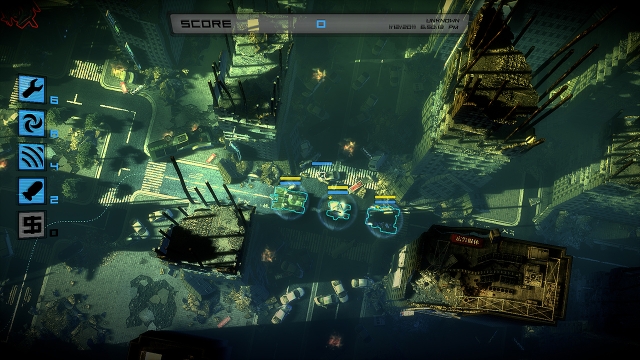 Don't think that you can set a path and escort your army too easily. Units can be destroyed without intervention from their commander, so placement of powerups will be critical at all times to proceed. Additionally, a change of plans will often be needed due to such events as a bridge collapsing or reinforcements arriving, so it will be necessary to continue changing the units' path throughout the level. Constant checking of the map will be necessary in order to find the best path (whether that focuses on unit safety or resource maximization will be up to you).

Aliens are smart creatures, so they brought different kinds of towers to this war. Basic towers do as you expect, but you also have the Behemoth, which fires area of effect plasma attacks and the Stormray, which fires a large, damaging laser straight forward. Later in the game you will face the Hackers, who can turn your own units against you, and the Energizer which sucks up your powerups to regenerate other towers. It is not enough to simply kill all the towers; you must know your enemy well to defeat them, lest you risk being annihilated. After each level, medals are awarded based on categories such as the quality of your path or your ruthlessness, which gives some replayability.

Campaign mode has three difficulties: Casual, Advanced, and Hardcore. Casual is a breeze through the first 2/3 of the game but the difficulty spikes when the Energizers enter the fray. Placement of powerups behind buildings or walls is key so that the Energizers can't steal them. Advanced and Hardcore present challenges right off the bat. The game is enjoyable at any difficulty level. 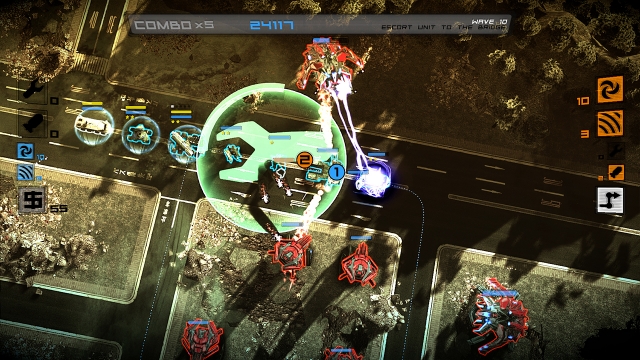 The campaign is short and may only take you about ten hours or less. After beating it, two survival modes open up: Baghdad Mayhem and Tokyo Raid. They require you to face off against wave after wave of enemies. New to the PSN release of Anomaly Warzone Earth is co-op play, which puts one player in control of the units and the other in control of the plans. Both of these modes spice up the experience and should tack on a few more hours.

Graphically, the game is solid. Not an award winner by any means, but still good and the aesthetic fits the game like a glove. The voice acting is very good; you can sense the fear in a scared unit as well as their happiness when they succeed. That said, there are not many recorded lines, so the units will say the same lines over and over again (yes, I can tell you are "halfway to death", I see your health bar. Stop telling me).

Sadly, there's no online play to be had in Anomaly Warzone Earth. But you can compare your scores to other players using the online leaderboards, which will be enough to drive the uber competitive players to replay the levels. 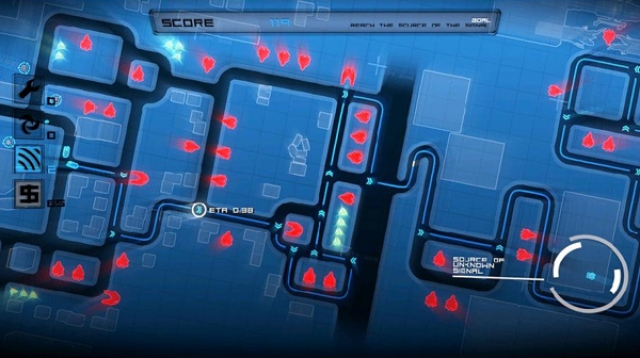 Anomaly Warzone Earth has seen releases on many different devices, and the result is always the same: a fun, but short game that turns Tower defense on its head and is well worth a playthrough. Now that it's on PSN, that is one more group of players who can experience this charming, quirky Tower Offense title.