Turning your company’s most famous character into paper form and making a game in an entirely paper world sounds like an idea straight out of the crazy train. But Nintendo and Intelligent Systems did just that with Paper Mario and it turned out to be one of the Nintendo 64’s greatest classics. It and its sequel, Paper Mario: The Thousand-Year Door, created a new RPG series that had an original art style, solid gameplay mechanics, and witty dialogue. In recent years, Intelligent Systems has changed up the series, first with Super Paper Mario, a platformer with light RPG elements that played in the 2D and 3D spectrums. Now, Paper Mario: Sticker Star changes things even further: all of your attacks are one-use stickers and there are no experience points and no partners. And while the decision to make changes to the formula is bold and laudable, the execution in Sticker Star shows that these particular changes may not have been beneficial. 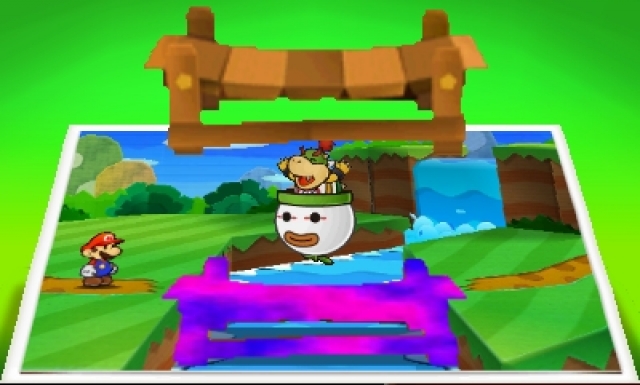 It is the night of the Sticker Fest and everyone has come out to see the Sticker Comet in all its glory. But Bowser wants the Sticker Comet for himself and attacks. In the ensuing chaos, the celebration is ruined, the Sticker Comet splits into six pieces and Princess Peach goes missing. Yep, it's basically the same plot found in past Mario RPG titles.

As the name implies, Sticker Star is all about the stickers. Littered throughout the world are stickers for jumping, hammering, fire flowers, Koopa shells and much more. These stickers are all used in battle to attack. There are no basic attacks or magic points to speak of; you simply use a sticker to attack and it's gone forever after it's used. With stickers aplenty, though, you won't have to worry about running out. Battles are turn based affairs, much like the Paper Mario games of old. Well timed button presses will get more damage from Mario's attacks as well as lower the damage from enemy attacks. In addition to the basic stickers, there are large objects scattered about the world, such as fans, trumpets, scissors, and bowling balls that can be turned into stickers. These stickers usually take up more room in the sticker album than the regular stickers but, in return, do much more damage to the opposition. 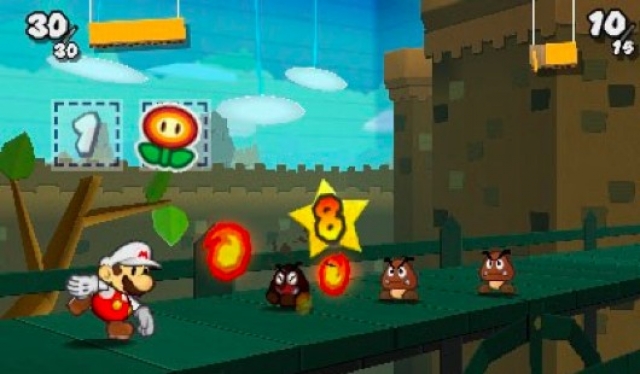 In addition to the stickers, there is a Battle Spinner mechanic. Pay a few coins to activate the spinner. Match up two or three of the same picture in order to get a bonus reward (coins and health are the most common rewards) and the chance to use more than one sticker per turn. You can also pay more coins to the spinner to automatically get two of the three slots to turn up with the same picture for an automatic boost.

The battle mechanics sound interesting, but the execution leaves a lot to be desired. There is no experience points system here, so your only reward for beating opponents is coins, the occasional health drop, or a sticker drop here and there. Over time, this makes battles feel very unrewarding and the better strategy becomes to avoid all minor battles to conserve stickers and continue with the game. Sure, you lose out on additional coins, but you won't be hurting for currency in this game as it is very easy to come by. 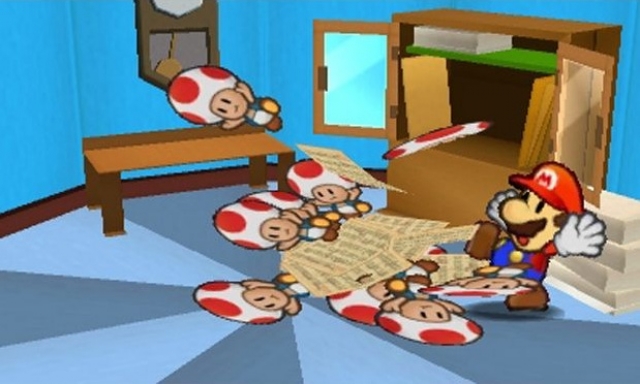 Boss battles also show a lack of balance on Sticker Star's part. While the basic enemies can be beaten with just about any sticker, the bosses tend to have one big sticker that they are weak to. But it's not always apparent which sticker that will be before you enter the battle, and if you don't have that sticker on you at the time, the battle becomes a war of attrition.

When not in battle, there's the starting town of Decalburg and the adjoining worlds to explore. The usual suspects are your location choices, which includes grassy fields, deserts, and forests among others. Sticker Star keeps the papercraft charm that the Paper Mario series is known for and enhances it with the 3D effects of the top screen. The different layers of paper separate from each other more than before. The little details, such as events happening in the background and the dust clouds rising up from Mario's hammer attack pop out more than ever. It's never required to play with the 3D on, but you'd be doing yourself a disservice to play it in 2D. The worlds themselves are charming as well. Each one has several levels, filled with multiple areas, so there is plenty to explore throughout the course of the game. The game is beatable in about 15-25 hours; low for most RPGs, but about equal with past Paper Mario games. 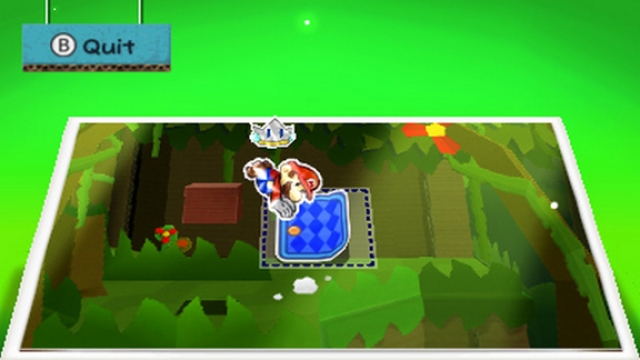 Along the way, you'll solve some puzzles and interact with the environment to advance through the levels. One of the main methods of doing this is Paperizing, which is the method of applying stickers to the world to change events or create new ones. Common stickers can be used to block wind gusts or poison geysers and door stickers can be used to access secret areas. Some of the big stickers - created through the collection of "things" - need to be used in Paperize mode to trigger new scenes, such as the Trumpet being used to wake up a sleeping Wiggler. Trouble can arise, however, because Sticker Star falls into the adventure genre trap of only having one intended solution for these puzzles. You might find a sticker that you think can do the job, only to try Paperizing it, have it not work and lose your sticker permanently. Then you either have to restart the game from your last save to get it back, or walk all the way back to the entrance and head to the specialty shop that deals in stickers. It's not that big of a deal if you have a walkthrough to help you through those parts, but if you don't, it can get annoying when you use the wrong sticker. 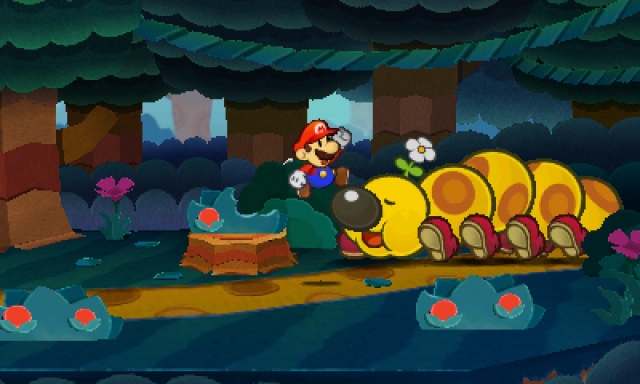 Script and humor has always been a strength of the series, and Sticker Star keeps up the tradition. The script is sharp, the names are funny (Snifit or Whiff-It!) and you'll definitely get some laughs out of the experience. The one disappointment is that Bowser, traditionally the source of great comedy in past Mario RPGs, is almost nonexistent in Sticker Star, but the other characters are capable of picking up the slack.

Music and sound effects are what you've come to expect from Mario by now. It's mostly upbeat, with some spins on classic Mario tunes mixed in. It feels right at home with past Paper Mario titles but doesn't deviate too far from them either. 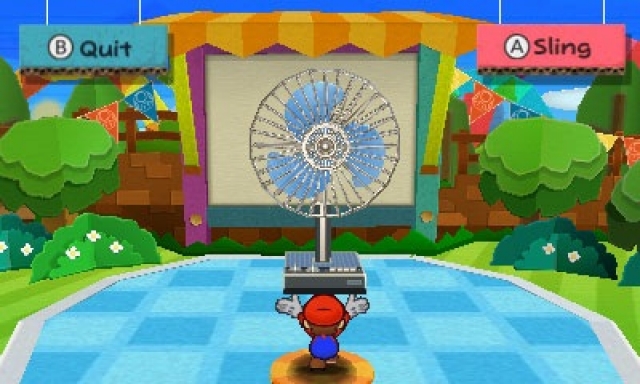 I applaud Intelligent Systems for being willing to make big changes to an entrenched series, especially with another Mario series, New Super Mario Bros., being so stagnant. However, change isn't always good, and in the case of Paper Mario: Sticker Star, the sticker battle system is a bit too awkward for its own good. That's not to say that Sticker Star is a bad game, as it still exhibits many of the elements that make Paper Mario a fun experience. Newcomers to the series won't be bothered by any of the changes, as they don't have any prior experience with the series. Veterans, on the other hand, need to come into this game with an open mind, cleansing themselves of what they've assumed Paper Mario needs to be. I believe Sticker Star is going to be remembered as a love it or hate it game within the series. Which one will it be for you? You'll have to play it to decide.

This review is based on a 3DS copy of Paper Mario: Sticker Star.