During the 15th century, the addition sign became widely used in Latin writing to represent adding numbers together. Now, in the 21st century, Team Ninja has used the addition sign to denote re-releases of prior games. We've seen it recently with Ninja Gaiden Sigma 2 Plus on the PlayStation Vita. Now, the Vita gets to share in on the console fun by getting its own full release of Dead or Alive 5 Plus.. Is it a worthy addition to your Vita lineup, or is it less than the sum of its parts?

Dead or Alive is a technical fighter, which means there is a lot to learn for a player to become skilled. Training Plus mode hits that point home, with a tutorial including over 100 different missions teaching you everything from basic movement to complex combo strategies. It does a great job of teaching new players the inner workings of the series. That said, there's no way to sugarcoat the great amount of techniques that must be learned to become good at the game. Casual fighting fans can still get enjoyment out of the single player modes on lower difficulty settings, though, and veteran fighters have all the training and practice modes they'll need to hone their craft.

Graphically, Dead or Alive 5 Plus should be praised for bringing all of the visual glory from the console version to the Vita. All the little details, from Jann Lee's extravagant fighting stance to the sweat on the fighters' faces carries over to this Vita port. It's not as high fidelity as the consoles, obviously, but it's still amazing that a handheld device can produce such strong presentation. The songs and sounds from the original game all carry over just as well, though the soundtrack doesn't have any memorable, standout songs.

The stages are tiered and this can be used to do extra damage to fighters, just like in previous Dead or Alive installments. Tossing opponents against walls deals extra damage, as does knocking them off a higher level to a lower level, or through breakable walls. These events can be as mundane as simple falls to being smack in the middle of a warzone, so it's important for players to keep an eye out for the danger zones on each stage.

Story mode continues where Dead or Alive 4 left off. Don't worry if you don't know or remember what happened there, because knowledge of past events isn't really important. In fact, taking the story too seriously isn't important either. The story in Dead or Alive 5 Plus is best described as a B-movie - a silly, tongue-in-cheek flick in video game form. It lasts about 5-7 hours and is mildly entertaining during that time, but, like most fighting games, this isn't the crux of the experience.

Other standard single player modes are also present. Versus lets you have a quick battle; Arcade has you battle through a chain of opponents to the final boss, much like the days of yesteryear; Time Attack challenges you to do all that as quickly as possible; and Survival will continue to throw opponents at you until you succumb. Unfortunately, Tag Team mode is not available in the Vita version of the game (though there are still some tag fights in story mode).

Multiplayer is available through Ad Hoc as well as online through the PlayStation Network. As with other fighters, ranked, unranked, and friend matches are available. There's also an online practice mode, where you can invite friends to practice with you. Leaderboards also compare you to the rest of the world. The Vita version features Cross Play, meaning that you can play against both Vita owners as well as PlayStation 3 owners of Dead or Alive 5 (an icon on-screen during the fight denotes whether your opponent is a Vita player or a PlayStation 3 player). This is a nice addition that increases the potential playerbase. Online, I did experience some lag at the character and stage selection screens, but the matches themselves ran smoothly.

The Vita version adds the ability to take screenshots in battle. Take photos of your favorite fights and share the memories of your most intense battles! Or take pictures of whatever you like - you have free reign. Also added is Touch Fight mode, which is a first person fight mode that equates different attacks, throws, and blocks to specific finger presses and swipes on the screen. It can be fought with the Vita held either sideways or vertically. It's a fun extra mode to play around with, but lacks the full depth of the original game and is little more than a sideshow to the main experience.

There's plenty of downloadable content to be had, in the form of new costumes, including those infamous swimsuits, bunny suits, and Santa suits for the female characters. Costumes are available for all of the characters (even some for the men!) and one purchase will be good for both the Vita and PlayStation 3 versions thanks to Cross Play.

Dead or Alive 5 Plus is another example of a console-to-handheld port done splendidly. Everything (other than Tag Team mode) has transitioned to the Vita, and Cross Play support means a PlayStation 3 DOA5 player will not have to re-purchase any DLC. Gamers on the go now have an option to play Dead or Alive 5 even when they are not home, which is great for series fans that can't get enough of the game or those who don't play console games. It's not going to convince anyone with reservations about the series, but it is exactly the kind of experience that fighting gamers will enjoy on their Vita.

This review is based on a downloadable copy of Dead or Alive 5+ for PlayStation Vita, provided by the publisher. 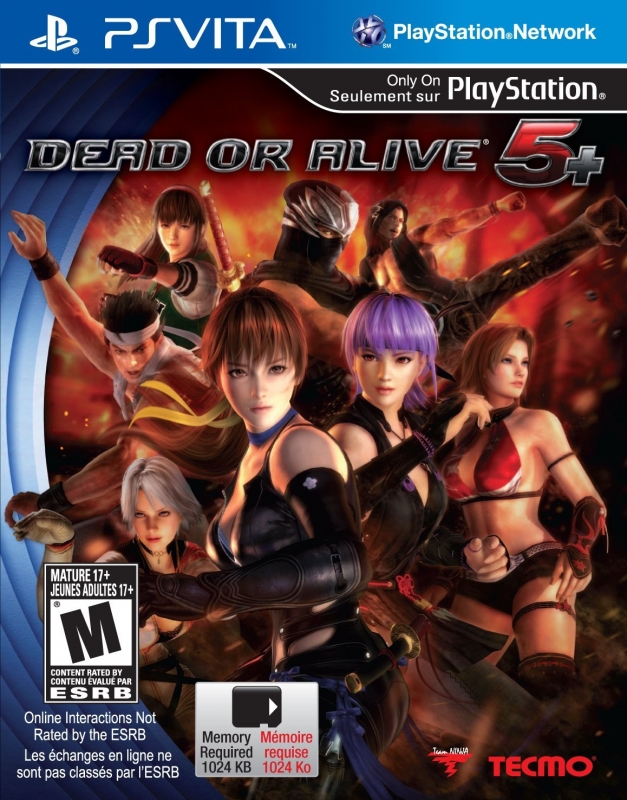