EA Sports UFC is coming to PlayStation 4 and Xbox One on June 17th. It is the first Ultimate Fighting Championship title since UFC Undisputed 3 and the first game developed by Electronic Arts. Featuring a roster of about 100 real-life fighters, the game promises to bring the rough-n-tumble atmosphere of mixed martial arts to the video game world. While this should be great for current MMA fans, others may feel left out, not knowing the fighters. There is one fighter, however, who may interest even non-UFC fans: Bruce Lee, the late martial arts icon famous for his lead roles in martial arts movies such as Fist of Fury and Way of the Dragon. 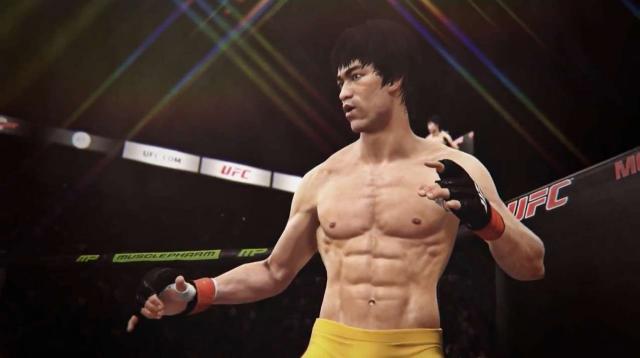 Though Bruce Lee became famous for his movie appearances, the man was an incredible athlete, becoming a world-renowned master of martial arts. It's this athletic prowess that EA wants to emphasize in EA Sports UFC.  In an interview with Xbox Wire, EA Sports UFC creative director Brian Hayes said that Bruce Lee "was someone renowned for being a tremendous athlete and very capable in several different facets of martial arts. So from our perspective, we're creating that. Here's an athlete with tremendous striking ability and capable skills on the ground, because those are the disciplines and skills that he started to explore later. We're not recreating a character from Enter the Dragon; we're recreating Bruce Lee, the athlete, if he were in the present day of UFC."

Hayes mentioned that Bruce Lee's intelligence and adherence to the simplest, most effective fighting movements would be re-created in the game. The way Lee holds his hands and shifts weight on his feet are unique to him, but the developers have not "put a lot of bells and whistles on that just to make it a cinematic Bruce Lee." Instead, Lee throws his punches in an efficient, straight line, like all good martial artists. Hayes notes that in the game, Bruce Lee's fighting style lends itself towards keeping the opponent standing up, but the famous martial artist would not be a sitting duck on the ground; he will have the ability to grapple. A spar with actor Sammo Hung at the beginning of Enter the Dragon was cited as an example of what Lee's grappling abilities will be like.

Though real-life fighters have to hit a specific weight before they can fight, Bruce Lee will be available in four different weight classes: bantamweight (135 lb/61.2 kg), featherweight (145 lb/65.8 kg), lightweight (155 lb/70.3 kg), and welterweight (170 lbs/77.1 kg). This is a nod to Bruce Lee's varying weight classes as he trained for specific movie roles. It also allows Bruce Lee players to take on as many UFC fighters as realistically possible. 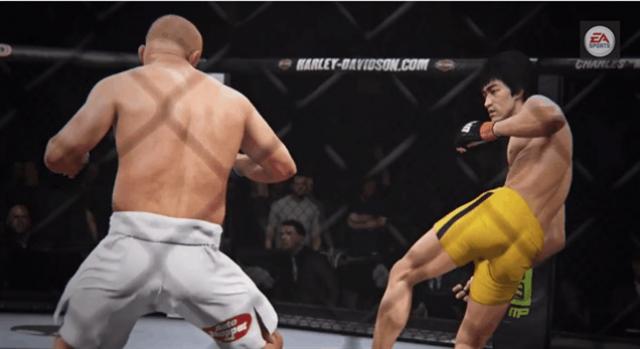 Some may find the addition of a fighter outside of the UFC scope to be strange, but this isn't the first time we've seen cameos of this sort (most notably, the legendary boxer Muhammad Ali was added to Fight Night Round 4).

Bruce Lee will be an unlockable character in EA Sports UFC. He can be unlocked immediately if you pre-order the game, by reaching the Hall of Fame in Career mode on one of the two highest difficulty settings, or by purchasing him from the game's storefront.

EA Sports UFC, Bruce Lee and all, will be available for PS4 and Xbox One on June 17th.