Citizens of Earth is a download-only RPG that harkens back to the silly antics of the highly-regarded Mother series. You fight all kinds of strange animal/appliance hybrids, travel from area to area with your crew of four, and even face a boss that is reminiscent of Earthbound's final boss, although I won't go into details. Taking heavy inspiration from such a classic set of titles doesn't necessarily guarantee success. That said, it's certainly something I can get on board with in the case of the superb Mother series.

You're the vice president of Earth and the entire planet is in distress - what do you do? Obviously, you delegate. The vice president of Earth can't risk his life fighting deer with phones on their heads or an out of control DJ. Throughout your journey you'll be able to gather allies who will not only fight alongside the main character but actually fight in his stead. They also come with special abilities that can give access to shops, side quests, or even important modes of transportation.

At times these abilities will be critical to advancing the story, and I appreciated that when these situations arose you always granted several different options in how to proceed. To get through a sandstorm, for example, you can recruit the weather lady to change the weather for you, or instead you can recruit the sea captain and travel by sea to avoid the sandstorm altogether. Having options sometimes doesn't help, though, especially when a particular problem features incredibly obtuse solutions or depends on factors outside of your control (I still haven't had it rain, for example, which is apparently the only way to recruit the aforementioned weather lady).

Another issue with having such a large number of possible characters to recruit is that in such a short game there's little to no time to actually get to know said characters. This turns the cop, the handyman, and the school mascot into tools for advancement instead of people that you can get to know, which is perhaps by design since by default they go by their jobs instead of their names, but is nonetheless disappointing.

This is exemplified by how few voiced interactions you get with these characters (which is also unfortunate, because I enjoyed those voices that I did encounter) and the obviously generic lines said by your party during story events that makes characters highly interchangeable. I couldn't help but feel like this left the character development lacking. Even your main character doesn't really grow, and you don't learn much of anything about him over the course of the game. Although the game's humor and gags are definitely funny, this is not enough by itself to make up for the lacklustre narrative and character development.

Battles in Citizens of Earth are similarly entertaining but soon outstay their welcome. You battle as a party of three of your choosing, with each member having their own special abilities that either increase or decrease their energy levels, with these energy levels carrying on to the next battle. Most of the characters have basic weak attacks or healing abilities that grant them energy which can then be expended on their stronger moves. It's a simple system but also one that lends itself to some interesting strategic choices (for example, when you put characters like the Barista into the mix you can transfer energy to other characters).

Some attacks have elemental properties, which enemies have weaknesses and strengths to, so planning ahead is also crucial. If you find yourself in a sticky situation, though, there's an option to restart the fight, re-picking and choosing the party members you think would perform best. This is particularly useful during boss fights as exploiting an enemy's weakness increases damage dealt and energy obtained, which is a huge boon to almost any strategy.

Battles do lose their lustre after a while, and that's due to the high enemy encounter rate. If you're fast and deft with an analog stick you can avoid a number of the minor monsters, but it can quickly become a bore when you're trying to get through a particularly dense area and the only way to survive is to take enemies on one at a time.

To partially mitigate the tedium, Citizens of Earth takes some welcome inspiration from the Mother series and causes enemies in an area to run away from your party if you've defeated a nearby boss. However, I usually had far more difficulty getting to the boss than actually defeating it, which I think is partially because Citizens of Earth is designed in such a way that your characters are interchangeable.

I assume the idea is that none of the characters are particularly robust and thus they can die even from a random minion monster encounter, in which case you'll simply replace the one that faints with a different character until you get a chance to rest somewhere. In practice, though, the high encounter rate and ease of character demise serves more to pad out the game's length than anything else (it took me 17 hours to beat, but I think a more reasonable encounter rate would have given me 14 hours of a more enjoyable experience).

Other than the lack of character development I found the presentation in Citizens of Earth to be well above-par. The soundtrack is enjoyable, although it's not particularly memorable, and the visuals and voice work are exemplary for what I assume to be a relatively low budget RPG. Unrealistic and even cartoonish visuals work well alongside the preposterous nature of the adventure and some of the funniest moments come not from the lines of text that the characters spout but from how those lines are read by the voice actors.

If Citizens of Earth were a tighter experience I think I could recommend it without reservation, lacklustre character development and all. As it is, however, my recommendation comes with a caveat - if you're looking for a fun little title that takes some obvious hints from the Mother series of RPGs then Citizens of Earth should do very nicely, despite the sometimes trudging nature of its story progression, but don't expect it to live up to that series' level of quality.

This review is based on a digital copy of Citizens of Earth for the PS4, provided by the publisher. 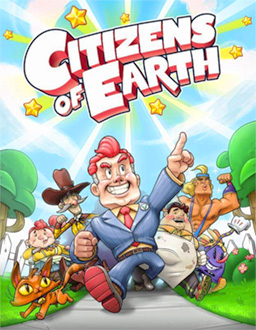