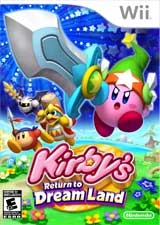 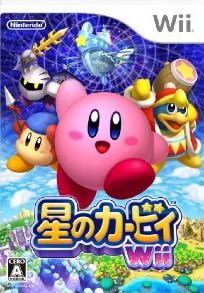 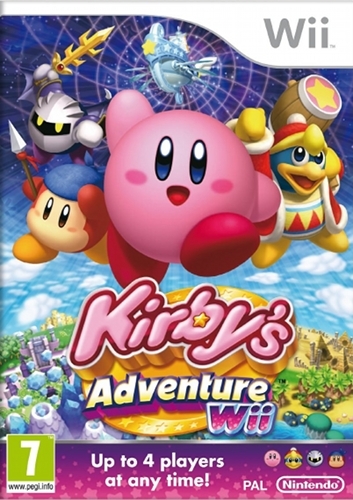 Kirby has been very busy. It was a short 12 months ago that we all got to take our mom’s sewing kits out for a spin in the fantastically charming Kirby’s Epic Yarn. Then, just a few weeks ago, Nintendo gave the DS its swan song with Kirby: Mass Attack. Both games impressed us enough to score a 9.1 and 9.0, respectively, and showed everyone that Kirby is so much more than just another gluttonous pink ball (hey, we all know one). Well, apparently two great games in one year aren’t enough for the Kirbster - he now has his sights on giving the Wii a great send-off with Kirby’s Return to Dream Land.

This is all the motivation that the party needs to set out on their globe spanning trek (that and the promise of a ride in Magolor’s spaceship), and while it gives the characters a reason to scour the land for wreckage it doesn’t explain anything else. Why is King Dedede attacking his own minions? Who is Magolor and why is he on Pop Star? There are a lot of loose ends and questions unanswered, but thankfully the lack of a proper yarn really doesn’t affect the overall experience. On the surface Kirby’s Return to Dream Land is a pretty standard 2D platformer. You'll be jumping, defeating enemies, and navigating obstacles with the classic Kirby fare of puffing yourself up to float, swallowing objects and enemies, and of course copying their abilities. This time, however, everything is bigger and better. Kirby can now swallow huge amounts of stuff and spit it all back up in the form of a huge star that destroys everything in its path. There are also several new abilities, like the whip that lets you pull off your best Indiana Jones impression and the leaf which hurls razor sharp leaves at foes. Also making their debut are super abilities, which for a limited time grant Kirby super-sized versions of copied powers, like a giant sword that can cleave the landscape itself, or a flame dragon that burns all in its path.

These new features are welcome additions but don’t really shake up the traditional Kirby formula all that much. Actually, while I have always enjoyed (most of) Kirby’s adventures, I do find that they can get repetitive and monotonous rather quickly (yes, even Epic Yarn is guilty of this), and this title is no exception. No, what really shakes things up here is the ability to play as four players at the same time - a first for the series and easily the best part of Kirby’s Return to Dream Land. In multiplayer, player one controls Kirby with all of his abilities intact, while players two, three, and four have their choice of Meta Knight, Kind Dedede, a Waddle Dee, or differently coloured Kirbies. Now, choosing a character is not merely an aesthetic choice but also a strategic one; Meta Knight’s sword can cut down foes and ropes in a flash, King Dedede’s massive hammer can smash through to new paths and Waddle Dee’s spear has impressive range. Also, players can switch who they control on the fly, allowing you to use each character’s ability to reach new paths and find secrets.

Now while the multiplayer is great fun (I don’t think I’ve ever laughed so much during a Kirby game), it does have some, let’s say odd, design choices. First off, players share a pool of lives. But if player one dies then everybody has to start from the last checkpoint. In fact, the game is quick to point out that player one - and only player one - is in charge of this party. If the others in the group start moving too far away from Kirby then they automatically warp back to him. Furthermore, only Kirby can use super abilities (although any players using coloured Kirbies can too), leaving Meta Knight, Dedede and Waddle Dee players to feel a bit left out.

In the end, however, these slight annoyances are just that. The four player co-op definitely goes much smoother than the friend-losing, controller-throwing, fit-inducing mess that was New Super Mario Bros. Wii, and is much more interesting than the laid back approach that Kirby’s Epic Yarn took. Kirby’s Return to Dream Land may just be the sleeper hit of a multiplayer party; co-operative platforming has simply never been this fun and pure.

A return to the series' roots in many ways, Return to Dream Land even controls like a classic Kirby title from the NES and Super Nintendo days. In fact, anyone who has ever played a ‘Dream Land’ game will immediately know how to swallow foes, spit them out, or copy them. It seems as if this was the intention all along - the game is very keen on keeping things ‘as they were', to the extent that only a few light motion controls have been introduced (like shaking the controller to have Kirby suck up big objects). Kirby’s Return to Dream Land is definitely not as good a looker as Epic Yarn. Yes, it did start off as Nintendo Gamecube title, but this is 2011, and it makes no sense for it to look like a downgrade; definitely nowhere near what the system is capable of, but acceptable. The environments in Return to Dream Land definitely look familiar - all of the classic Dream Land staples are here. There's nothing that makes this game stick out from the pack though. It all feels like ‘generic’ Kirby; exactly what you would expect, but without any pleasant surprises. Even the cut-scenes lack personality and do an iffy job of telling you what’s going on. Not only does it lack voice acting, but most scenes don’t even have dialogue boxes, forcing you to rely on the characters' facial expressions to have an idea of what’s going on.

There's one area where Kirby’s Return to Dream Land trumps Epic Yarn, however, and that’s in the soundtrack. Epic Yarn's was too quiet and slow paced to add any excitement - more of an epic yawn - but Return to Dream Land fixes this issue, boasting a soundtrack that's filled with both classic Kirby fare (I absolutely love the victory theme) and new tracks that are upbeat, catchy, and perfectly suited to the Kirby universe. Kirby’s Return to Dream Land features seven worlds, each with a handful of levels, and clocks in at an hour or so less than Kirby’s Epic Yarn’s ten turns of the clock, though keep in mind that Return features a lot of unlockable stages, challenges, and mini-games to keep you playing. These bonuses are unlocked by collecting ‘Energy Spheres’ (sort of like the star coins in New Super Mario Bros. Wii). Additionally, after you complete the main game you can take on the game’s ‘hard’ mode for a real challenge. All in all, Return to Dream Land features more post-credits activities than Epic Yarn. The challenge stages will prove difficult for even the most seasoned Kirby veteran, and the mini-games (of which there are only two) are way more fun than they have any right to be. The addition of a ‘hard’ mode is also welcome, since Kirby’s Return to Dream Land is definitely a bit on the easy side.

On one hand Return to Dream Land definitely isn’t as imaginative or creative as Epic Yarn (or Mass Attack), but when you forget that those games exist and you look at Return to Dream Land on its own you find that it's a solid entry in the series. The gameplay, while slightly too bland and easy in single player, is an absolute blast in multiplayer. The visuals do the series’ history justice, the soundtrack rocks, and there is plenty to do after you show the final boss that you’re not just a pink puff ball. It doesn't take the series anywhere new, but that doesn’t mean you should ignore Return to Dream Land; perhaps we were all spoiled for a while with too much Kirby goodness.