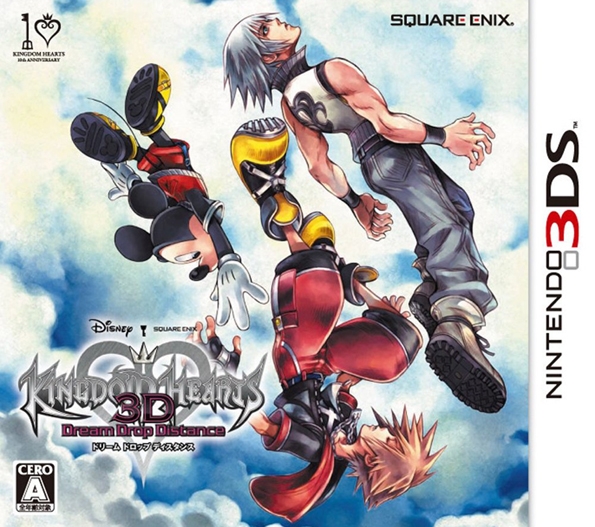 Get it? Because there are three D's!

Well, it’s about time.  It's been six years since Kingdom Hearts 2, and in that time we’ve seen a prequel, a side-story, and… whatever the heck Re:Coded was.  After all this time, we’ve finally got a direct sequel to the second game.  We’re back in control of Sora and Riku, beating up the forces of darkness with our keyblades and saving the girl (okay, I made that last one up).  While not quite Kingdom Hearts 3, Kingdom Hearts 3D: Dream Drop Distance is certainly a fine entry in this long-running series.

One of the strongest points is the story.  The game picks up shortly after the events of KH2 and Re:Coded, with our heroes attempting the Mark of Mastery exam, which, if they succeed, will make them true Keyblade Masters.  To pass, they must each travel to seven worlds and save the Square and Disney characters therein from the darkness of new enemies called Dream Eaters.  Simple enough, right?  This review is spoiler-free, but suffice it to say that things get a heckuvalot more complicated by the end.  Unresolved plot points from each previous game are referenced frequently, and the final world throws a veritable nerdgasm of plot twists and exposition your way.  The ending is a clear setup for Kingdom Hearts 3, but a lot of loose ends still get wrapped up and it’s nice to know just how the plots from the previous five games will be working together to finish things up.  Be warned, though: this game is full to the brim with KH jargon.  You unlock periodic summaries of previous games as you play, but if you don’t know what a Nobody is, the difference between a Keyblade and a X-blade (also pronounced ‘key’), or who gave their heart to whom, then you’re going to be completely lost here.  Newcomers should play some of the other games first, particularly the first two numbered entries and Birth By Sleep.

You don’t need to have played anything, though, to appreciate the action-packed fighting system.  At the most basic level, Kingdom Hearts 3D uses the series’ trademark real-time Action-RPG combat system, so you’ll be spending a lot of time bashing bad guys with your Keyblade using the A button, and using magic and other flashy commands with X.

Series fans are used to all that, though.  What’s actually new in the fighting system?  A lot.

First, there are the friendly Dream Eaters.  Created using special recipes found throughout the game, they are essentially licenses to build your own party members.  They come in many shapes and sizes, and each has a Final Fantasy X-style ability tree that lets you unlock new skills for your main characters as the critters level up.  During combat, in addition to having them fight alongside you, once special meters fill up, you can activate their special abilities.  When playing as Sora, this amounts to a unique super-attack, while Riku gets temporary changes to his fighting style.

Dream Eaters actually bring an entertaining side-RPG to the proceedings.  You build a team of up to three out of the dozens of available recipes, and they gain experience that can be used to unlock better stats and new abilities for Riku and Sora.  Experience and disposition can also be changed by playing with and training your Dream Eaters in a strange mashup of Nintendogs and Monster Rancher.  They can also be entered in Pokemon Stadium-style tournaments where you pick their attacks while they move independently.  Additionally, you can leave them in portals anywhere in the game world for other players to engage in combat via SpotPass.  If the Dream Eaters win, they gain lots of experience, and ditto for the player if they win.

The next improvement to combat comes in the form of Reality Shift commands, which use the touchscreen at certain key points in the fight to initiate special attacks.  Each world has its own unique Reality Shift.  One, for instance, lets you use the stylus to fling one enemy into others, while another has you firing bubbles at them in order to trap them inside one.

Really, though, the best part of the combat in this game can be summed up in one word: FlowMotion.  With this innovation, Kingdom Hearts has finally truly become the anime it has always wanted to be.  Using just a single button, you can fly off walls, grind on railings, swing on lampposts and larger enemies, and come crashing down on foes with enough sizzle and flashing lights to humble Dragon Ball Z.  Throughout the game, you get upgrades to augment these abilities, like a double-jump or the capacity to glide.  I handed a late-game boss his you-know-what using this tactic almost exclusively, and it was just about as satisfying a feeling as I’ve ever felt from a game.

The game does sometimes go off the rails with the new features.  Throughout the game, control constantly switches between Sora and Riku’s perspectives.   Instead of having separate save files or simply letting the player choose when they switch, you change to the other character once you deplete a bar called the Drop meter.  This meter constantly goes down as you play.  Getting hit hard makes it drop faster.  There are purchasable items called Drop-Me-Nots that allow extra time, but they can’t be used during battle unless you assign them to a command slot, meaning you’ll have one less space for an actual attack.  Several times, I was Dropped while near the end of an arduous boss battle, and had to completely restart the fight upon returning to that character.

As the 3DS is the most powerful system KH has ever been on, it’s no surprise that 3D is the best-looking entry in the series.  The trademark cartoon-meets-anime visual style has been retained, but character models are smooth as silk, loading times are brief and rare, environments are large, and cutscenes are stunning and evocative.  On the audio side, Haley Joel Osment and David Gallagher reprise their roles as Sora and Riku, and many supporting characters have their voice actors return as well.  Some of the series’ most tear-jerking themes, Dearly Beloved and Sanctuary, make triumphant returns, and the Disney worlds all have appropriate music.  A new song created specifically for the game would have been appreciated, but its score is still rousing.

Kingdom Hearts 3D’s length is roughly par for the series’ course, with a playthrough on Standard difficulty taking me around 20 hours.  You can start a new game with all of your souped-up Dream Eaters, and, like the other games, there seems to be some secret content I have yet to unlock.  Every once in a while, the experience gets repetitive, as Riku and Sora’s journeys through certain worlds are quite similar, but overall the story and gameplay was engrossing enough that I was sad when it was over.

Essentially, it should go without saying that Kingdom Hearts fans need to own this game.  It features the most exciting combat the series has ever known, has some stunning visual and audio work, and ties together all previous titles while weaving new plot threads that set the stage for a final entry in the series.  As mentioned, newcomers may want to try some of the other games in the series if they’re interested in the story, but otherwise, this is a truly rock-solid Action-RPG.  Now, Square, if it’s not too much trouble… Kingdom Hearts 3?

This review is based on a copy of Kingdom Hearts 3D: Dream Drom Distance for the Nintendo 3DS, provided by the publisher.