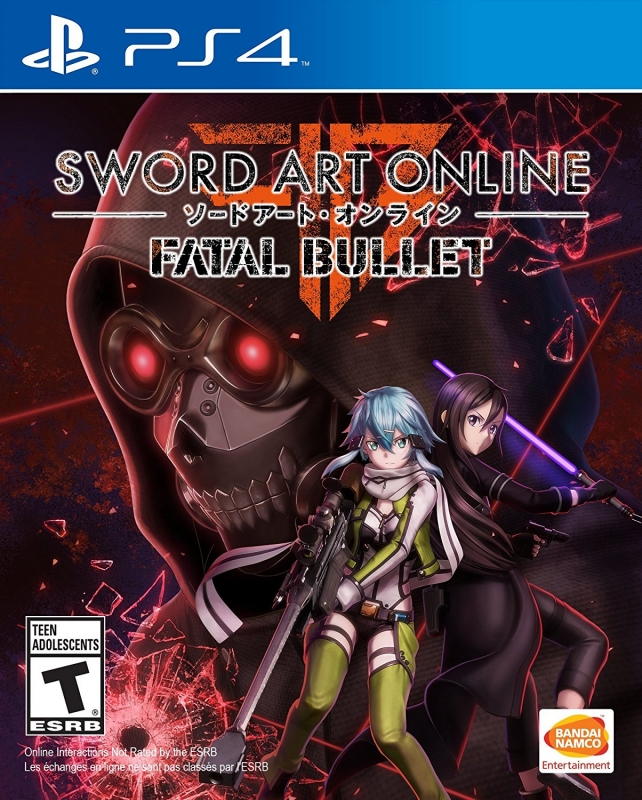 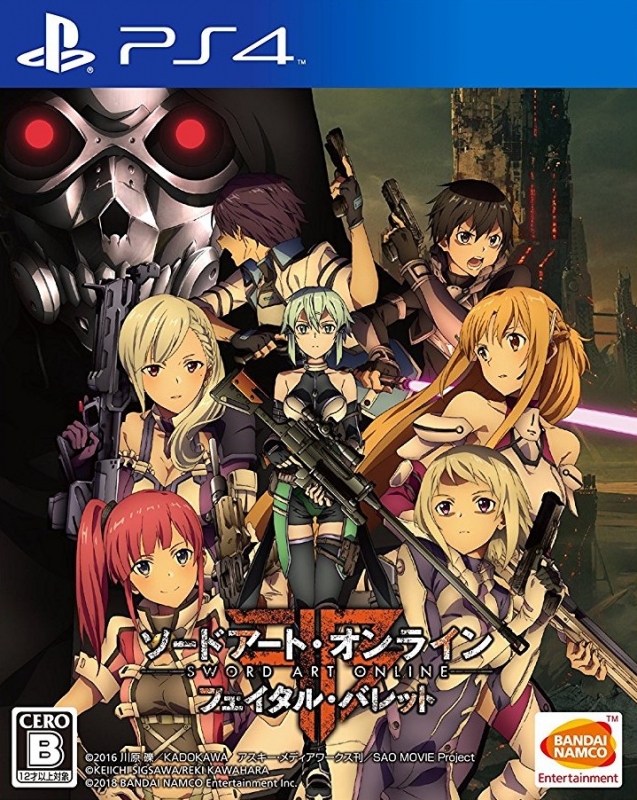 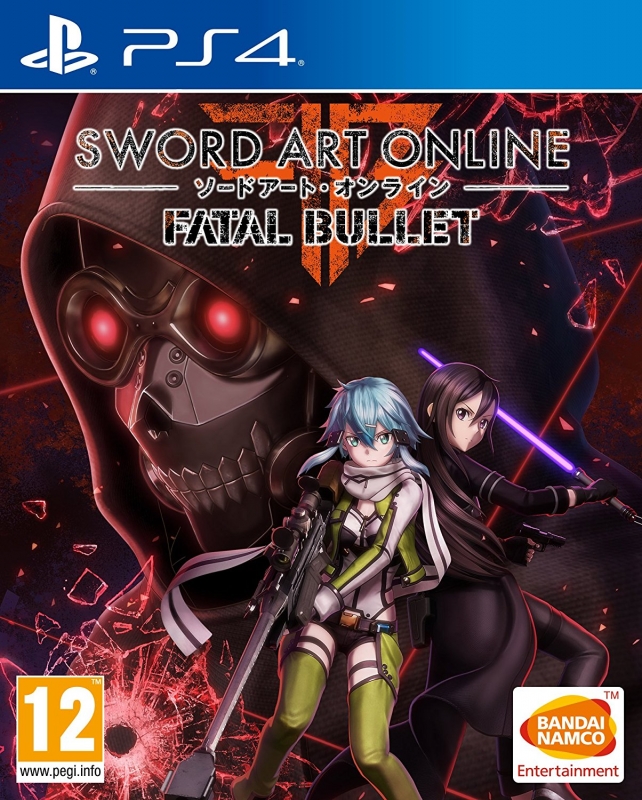 Improved gameplay and content, but strays a bit too far from the series it's based on. 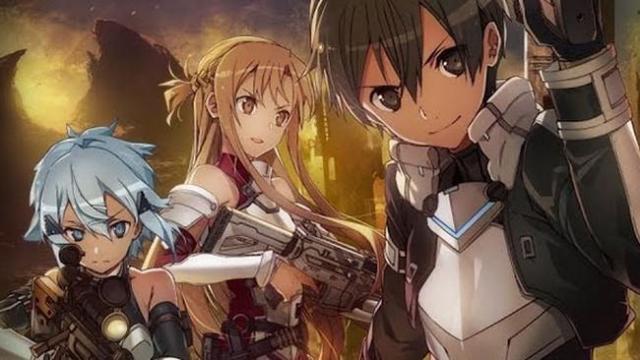 In four years of Sword Art Online games, we sure have had our fair share of Heroic-Fantasy. It's understandable that Bandai Namco would focus on it given the popularity of the very first arc of the series, but it was high time we got to try something a bit different. So sheathe your blade and check your ammo, because Sword Art Online: Fatal Bullet finally brings us to the cyberpunk world of Gun Gale Online. 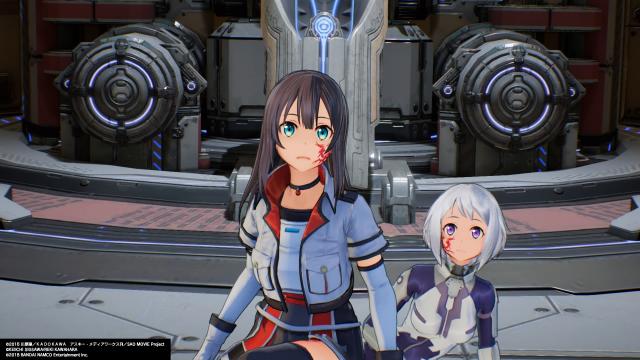 For the first time in the series, you don't play as an established character (most of the time, see below), but rather as an original, self-created character, much like you do in 'hunting' games like God Eater. The character creation tool is quite similar to the one featured in Sword Art Online Hollow Realization in terms of customization, offering a decent array of possibilities, but nothing very revolutionary. As soon as he (or she) enters the virtual reality of Gun Gale Online, your avatar immediately obtains a rare AI character called Afasys (for Alpha System, but cuter) who will support the party throughout the whole adventure.

Your avatar will also get acquainted with Kirito's group, and you can then choose up to three Sword Art Online characters to help you on the field. The progression system has you exploring five wide maps and clearing the dungeons located within them. The AI of your allies is efficient most of the time: they heal or revive other characters when needed and withstand enemy attacks pretty well.

There's an interface located on the touch pad of the PS4 controller which allows you to issue orders to your team, so that they regroup or focus on one particular action, and it fits the pace of the gameplay because it's quick and easy to use. Unfortunately, there are some bugs present, like your buddies not being able to exit a room. That particular issue was supposed to be fixed in a recent update but it's still a problem as of patch 1.03. 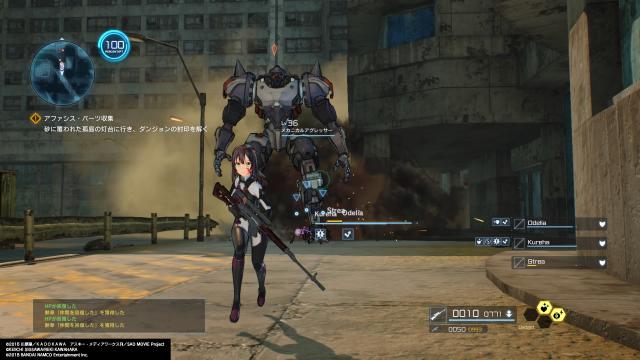 The dungeons themselves are fairly labyrinthine and complex, with tons of teleport gates leading to secret treasures or special opponents. You also face a few puzzles involving switches - nothing very new but it does make a change of pace from the shooting.

Beyond the dungeons, the large fields turn out to be rather enjoyable to roam around in because they're not divided into tiny areas like they were in Hollow Realization. In Sword Art Online: Fatal Bullet, you've got one big map to explore, searching for dungeons and shooting your way through countless monsters and machines.

Enemies come in sometimes large groups, which reinforces the feeling of a merciless battlefield. The desert is a tricky place, with several locations quite hard to conquer or defend, and the fallen city features fun street fights, where giant robots can assault you at every corner. On the subject of enemies, I feel it's important to emphasize the variety of foes you'll encounter, from androids specialized in every type of weapon, to powerful beasts, kamikaze robots and flying mechas that harass you from the skies. 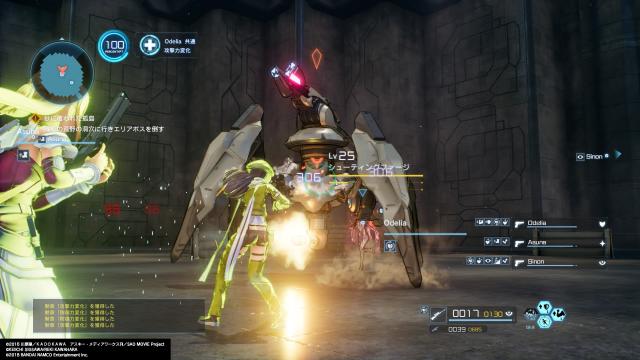 In contrast Accel World vs Sword Art Online before it, Sword Art Online: Fatal Bullet features a fast-paced, dynamic gameplay. You need to be constantly on the move and dodging efficiently because character HP can go down very quickly. As such the game encourages you to counterattack and aim like a pro if you want to be the last one standing, although it's important to note that Fatal Bullet does have an aim assist for those that are unfamiliar with TPS games.

Enemy levels outstrip your own, which significantly raises the level of challenge in the second half of the game. This turned out for the best and was fairly enjoyable as far as I was concerned; battles grew fiercer with every room and every corridor. Sword Art Online sure has improved as an Action-RPG compared to previous entries.

Fatal Bullet also delivers when it comes to equipment. There are eight categories of weapons, ranging from the traditional assault rifles and sniper rifles to the infamous lightsaber, with which you can actually deflect bullets with like a true Jedi Knight! But what is really impressive here is that there are numerous types of weapons within each category - you can play for dozens of hours and still find brand new guns to add to your collection, all inspired from real weaponry.

As for sniper rifles, you can acquire semi-auto rifles like the M21EBR, which Call of Duty players will surely remember, anti-material rifles like the AMR (so heavy that you need to level up a long time before you're able to wield it), and the VSS which was featured in Metal Gear Solid 4 (and it so happens that it's called 'Quiet' in Fatal Bullet). 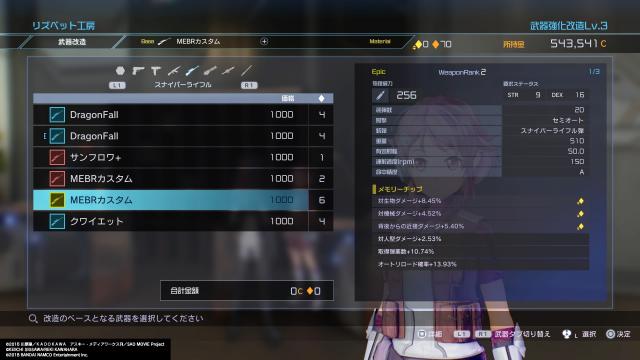 All weapons can be strengthened at Lisbeth's shop in exchange for money and materials. You can even add very useful passive skills (increased damage to machines, increased experience points, larger magazines, and so on) by using another gun as material. As in Destiny, weapons have a rarity level, from Common to Legendary. The rarer the gun, the more skill slots it has. Looking for the best loot and fine-tuning quickly becomes a game within the game, and it's all very intuitive thanks to the best weapon management system in the series.

Also at your disposal are a whole load of gadgets, including various grenades, claymores, medikits, and the like. However, there are stat requirements to use all of them, and you'll need to level up in order to equip the most powerful ones. For example, the semtex can be used only when your dexterity reaches 46, which can take a very long time to achieve. Note that the gadgets, unlike rifle ammunition, aren't limited - once purchased you can use the gadget indefinitely. The only limitation is a charge timer. There are even countless outfits available in-game, so there's no shortage of content. 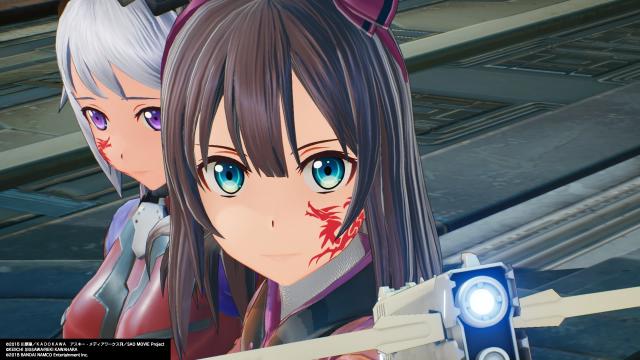 Being the first Sword Art Online game that doesn't include a PSVita version, Fatal Bullet ditches the 2D models from the dialogue scenes and now offers up 3D cut scenes. It's a solid effort, although the level of investment clearly isn't on a par with the biggest games from publisher Bandai Namco. Nevertheless, significant progress has been made to display more impressive and seamless rendering, despite sometimes average modelling and animations. In exploring and action, the game is really good-looking. 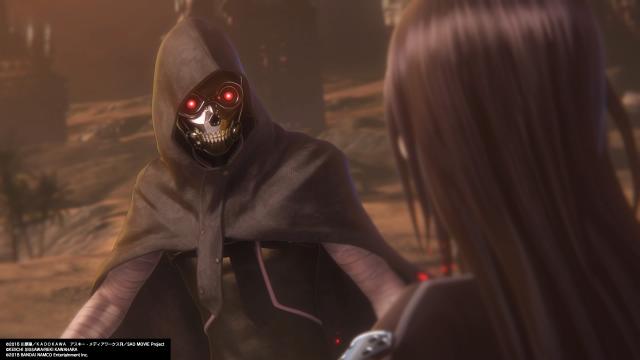 But beyond the gameplay and the brand-new universe, Sword Art Online: Fatal Bullet unfortunately falls short in terms of narrative. The much awaited 'Kirito mode', which allows you to experience the story of the Phantom Bullet arc of the TV show, somewhat symbolizes this disappointment - it lasts two hours at best and includes only three short encounters in narrow areas. There are also a couple of cut scenes of uneven quality, so on the whole there's very little added value there.

You might even come to wonder why the game is called Sword Art Online given how limited the content actually connected to the original work is. Playing from the point of view of a speechless avatar doesn't help, and neither does Afasys' foolishness - your sidekick is only there for humoristic purposes and does little to actually help. Sword Art Online characters get little screentime and therefore don't stand out much - there must be only two or three conversations with each of them in the whole game, plus a few illustrations (though these aren't bad at all, to be honest). Secondary characters aren't playable either, which is another huge letdown when you consider that the previous game had 44 playable characters! 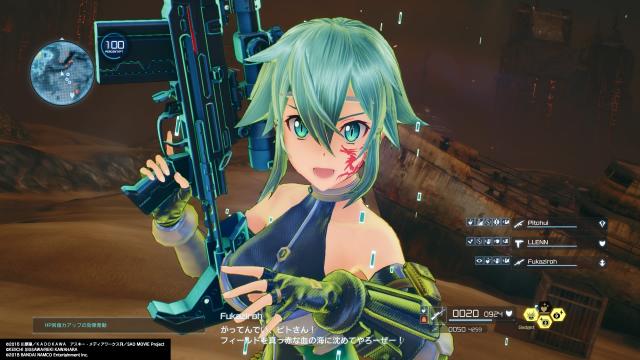 So series fans have no choice but to tinker with the character creation mode if they want to play as key Sword Art Online characters. As you can see above, you can quickly obtain good visual results, but of course the original voices aren't included. In the end, I didn't really get the feeling that I was playing a Sword Art Online game, but rather something else that shared the same overall universe. 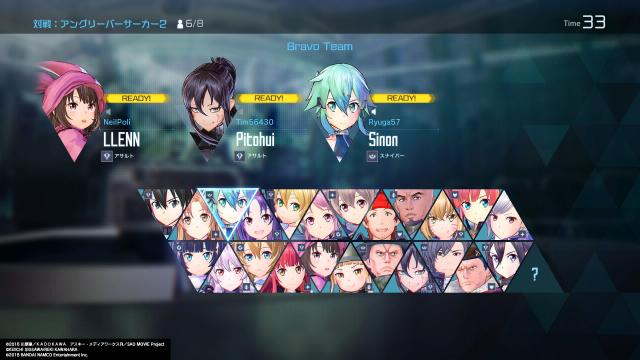 Fully aware that most players will want to switch characters from time to time, Bandai Namco has added a multiplayer mode called Hero Battle, in which you can play as the traditional series characters. That is, if you ever come to enjoy Fatal Bullet's competitive multiplayer, which is blatantly unbalanced, includes only two tiny maps, and can't properly gather eight players. The cooperative mode is a lot friendlier, but only features short and easy boss fights. On a more positive side, update 1.03 adds characters from Sword Art Online Alternative Gun Gale Online, a spin-off of the main series. LENN, Furikazoh, M and Pitohui liven up the atmosphere thanks to their extravagant personalities.

Sword Art Online: Fatal Bullet heavily focuses on the original characters created for the game, ones which in fact supersede the usual heroes. The scenario completely revolves around Zeliska, Kureha, Itsuki, and the relationship they have with the protagonist. The story actually unfolds after the Kirito mode, that is to say very late in the game. The surprising thing is that death is at stake again, for the first time since Sword Art Online: Hollow Fragment four years ago. That leaves open some very interesting scenario perspectives, but alas the game ends without giving a clear conclusion to the narrative. The conclusion will very likely be in the season pass, just as in Hollow Realization, from which Fatal Bullet clearly inherited a few drawbacks.

Being a sort of anime-themed The Division, Sword Art Online: Fatal Bullet does bring efficient third person shooter gameplay and solid content to the table, despite multiplayer modes that are certainly under par. Sword Art Online fans might be disappointed by the distant and incomplete approach taken towards fitting this into the original series, but it still remains a good pick up for people fond of Japanese animation, even if it lacks a compelling narrative.

This review is based on a digital copy of Sword Art Online: Fatal Bullet for the PS4