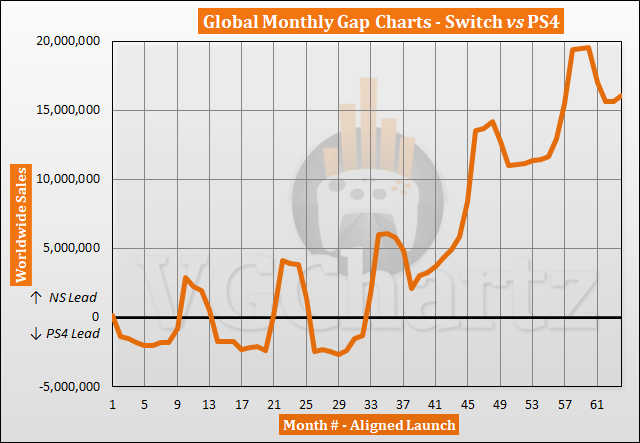 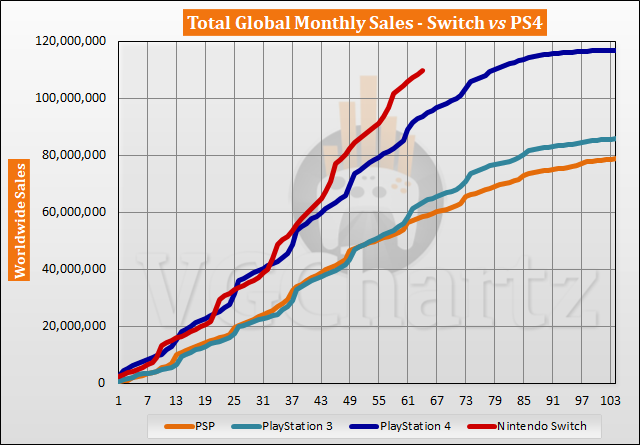 June 2022 is the 64th month that the Nintendo Switch has been available for. During the latest month, the gap grew in favor of the Switch by just 406,255 units when compared to the PS4 during the same timeframe.

The PlayStation 4 did not reach current Switch sales until month 79 where it sold 110.20 million units.

The Switch will probably pass the PS4 November of this year and the Game Boy November / December of this year. I think just for comparisons sake that the Switch should be compared to the combined sales of the PS3 and Xbox 360 like what you did with the PS4. Obviously, it will not win but it would be interesting to see how long it would last against the HD twins.

They could also compare it to PS3 + PSP, a home console and it's handheld counterpart since the Switch fills both roles. It already beat Wii U + 3DS and obviously Wii + DS is off the table, so that might be the best in between.

Maybe but the PSP did not a nearly as strong back half as the Xbox 360, it would make sense to try this comparison. I mentioned the PS3 + Xbox 360 in particular because they used it for the PS4 so there would be a reference point. Maybe vgchartz could do what they’ve done in other articles and include PS3 + Xbox 360 as the main comparison but also include PS3 + PSP and Wii U + 3DS.

Though I would say that it is near impossible for Switch to surpass PS3/360 combined, I wouldn't rule it out completely, as long as a Switch successor doesn't launch until Holiday 2025.

I know it probably won’t outsell the PS3 + Xbox 360. I just want to know how long it would last competing against its sales as those 2 in particular had a strong back half which would show in comparison to the PS4 how long it lasted. The PS4 if my memory serves me correct fell behind after the PS3 skim launched.

October might be too early considering there is likely to be no revision model released this year. It should 100% pass the PS4 by November though.

16M ahead, and it's apparent that the Switch still has a couple of good years coming still. 2022 could potentially be higher than any PS4 year, and 2023 may even look like the PS4s 2019 (14M units give or take)

So, basically, Switch will likely be at least 30M units ahead of the PS4 by the end of it all, provided Nintendo doesn't offer a replacement next year.

This one is just a matter of time