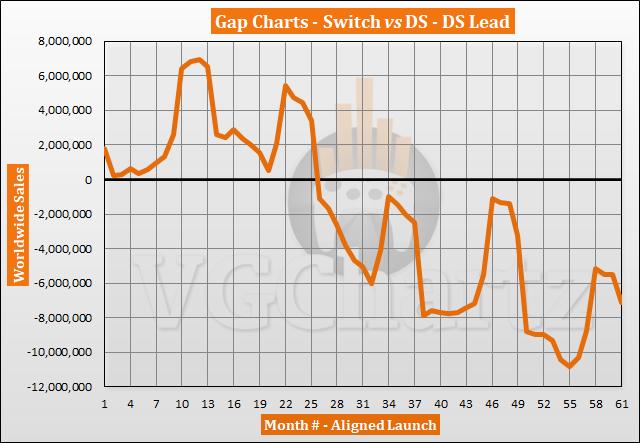 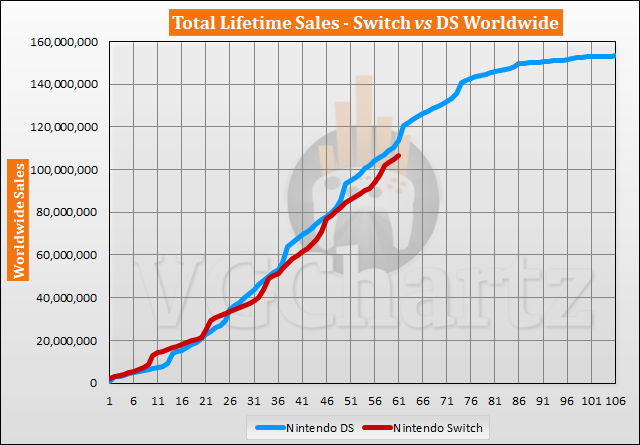 Switch is slacking off a little. This is going to push the intercept course (if it happens at all) a little later. March 2025 for the successor or there's no chance.

Its also because its a March vs November comparison. Switch will be around 127 millions by month 70 while DS will be around 132. It will get closer again and the next Holiday for DS shouldn’t be a big problem.

I was referring to the slight decline in switch sales so far this year. But yes, with the holidays misaligned, it makes it hard to tell how close or far they are at times.

Ill be shocked if switch will cross the DS sales numbers. I see Switch closing out at 150 million max. I think the next one is going to be released in 2024. Once the next gen switch is out, the current one will slow down by a huge margin.

High inflation and High cost of materials/manufacturing costs, but yeah they will drop the price…..

We do have to imagine what effect that will have on the successor. My guess is they're trying to bide their time until the conditions are a little more favorable. There's never a guarantee about how the trends will go though.

If a Switch successor doesnt release until 2024 and the Switchs momentum (i.e approximately 20 mill sales each year) maintains sufficiently 22 to 23 and 23 to 24 then Switch certainly has a good chance. Its on 107 mill currently. Even after Switch 2 releases Switch sales wont nosedive theyll probably half year 1 and then phase out from there. I estimate that Winter 2025 the Switch will have become the number 1 selling console of all time

Switch would have to really kill it this holiday, meaning to have the best holiday season to date. However, considering that after 14 weeks the YoY sales are down by around 25%, I doubt it. Even without the YoY drop (the repeat of 2021), Switch would still be 5M behind by the end of this year. In reality, next month, this gap will reach a new bottom of 11-12M. This is almost half of the annual sales in a good/close to peak year. I was hopeful, but sorry fellas. IMO this race is over.

Switch in 2021 had an insane H1 but fumbled in the rest of the year. With system sellers and hopefully shortage getting better, im sure It can gain some more momentum at the end of the year. They still can get more aggressive with the pricing here.

We still have many big titles to come next year and it just shows the race is far to be over when Switch yes as a disadvantage but has way more life in it left than DS at that point. DS was in a big piracy problem and the models were already dirt cheap.

I expect a lower low in the gap chart. No sign of a trend change yet.

Next month is DS 7mil so yeah gap will be down to 12.5-13mil.
The 12 months after that DS did 20mil which I don't think Switch will match, but it's an easier target so the gap might only extend to 14-15mil by April next year (Dec 2010 for DS), after that the DS sold less than 13mil over 3 years so Switch should gain some ground back (unless Switch 2 releases early 2023) but I don't expect it to catch DS.