"While we have your attention, we would also like to thank our amazingly loving and engaging community," said Guerrilla Games Studio Director & Executive Produce Angie Smets. "We love seeing the never-ending flow of cosplay and in-game photography, and it’s amazing how fast the community has grown as well.

"We are happy to share that as of November 28, 2021, Horizon Zero Dawn has sold through more than 20 million units worldwide across PlayStation 4 and PC combined, and the community has spent more than 1 billion hours in the game! It humbles us, thank you so much for your love and dedication." 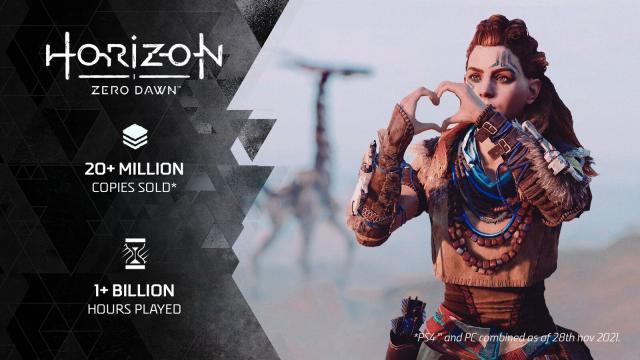 Horizon Zero Dawn first released for the PlayStation 4 in February 2017 in North America and in March 2017 in Europe. It would later launch for PC in August 2020.

The sequel, Horizon Forbidden West will launch for the PlayStation 5 and PlayStation 4 on February 18, 2022.

Interesting that the game is is in the 20 million + sales range like BOTW that released around the same time.

If Botw came out on PC it would probably be 30-40 million total by now.

Then they should release it on PC

No, because sales of the Switch would be affected, this is precisely the purpose of an exclusive game.

im not sure how many, but sales would be in the millions, id guess over 10 million

And Zelda has what, 25 years of history? BotW’s sales are also stellar, but Horizon selling this many copies as a new IP is nothing short of staggering. Id guess that you could probably count on only one hand how many new IP have sold 20mil+ copies.

I never said what Horizons has done isn't amazing. Someone else made the comparison to Botw, so I jumped in to clarify that they aren't exactly comparable due to no Botw PC release.

Understood. :) It seemed like you were praising BotW in such a way to minimize HZD.

That was not my intention. HZD has done an amazing job.

BOTW is probably closer to 30 then 20 million with the wii u version included.

Wasn’t the Wii U version at like 1-something million at last update? Think it was from a few years back, but I also think the legs would be terrible. So with Switch version being 25-something, I think combined probably 27mil range maybe?

Yes, I know that; I never said it wasn’t. I was just trying to give a more specific number than “closer to 30mil than 20mil.”

We should consider price. I have seen Horizon for less than 10€ a lot of times. I have yet to see BOTW for under 50€ retail.

Can't believe theyre getting all the media and success and they fcken deserve it!

This is so freaking deserved. This (at least based on my taste), probably the best new IP that I played in the past 5 years.

Same for me. Ghost might beat it but haven't had a chance to play it yet.

Ghost of Tsushima is really amazing, but it did not beat Horizon Zero Dawn for me. Ghost does have one thing though: it's side quests are the best of any open-world game I have ever played. It just seemed to me that every one of them was different and unique, and felt like you made a real difference to that character.

Genuinely my favourite open world game of all time, so I'm glad it's reached such heights.

So happy for this. It is such a masterpiece in so many ways.

Can't believe I just now saw this! This is actually HUGE news for a couple reasons:

1) Enough comparisons to Breath of the Wild: this was an original IP, not the latest installment in a franchise that's been established for generations. AND...

2) These sales numbers make Horizon Zero Dawn officially the top-selling video ever to use a solo female protagonist. By a mile at that. The previous record was held by 2013's Tomb Raider reboot at around 14.5 million copies sold as of last October. Aloy has now officially displaced Lara Croft as the most visible and iconic gaming heroine of all time!

I'm offended, how dare you.

lol, you actually did look it up. :-P

Big if you even consider it was given on PS+ at one point.

I wouldn't think the PS+ numbers would count toward sales.

No but they could negatively impact sales because people received the game for free rather than make a purchase.

It wasn't given out on PS+, it was given out for FREE as part of the Play at Home event for everyone on PSN with NO Plus sub required. That's over 100 million active PSN users that could have downloaded it and this still sold 20 million actual sales. They didn't even bloat it up with "Players" as others do.

Does that include the free donnloads on ps plus?

Incredible sales! Kind of disappointed it's taken 5 years for a sequel and there is only 1 DLC in that time though. Surely they could have released at least 1 more DLC!

While i did not like this game at all, it's still good to see a new single player in selling so well

Just curious: what were your hangups with it?

Its just a game where everything rubbed me the wrong way, didn't like the story, characters, gameplay or the artstyle.

My biggest thing was how everything was told - in the most boring way possible - more than half the story (and that is the potentially interesting half) was told through holograms talking to each other. It had all the excitement of Aloy reading a book.

Awesome to see!!!! Huge congrats to Guerrilla! Wouldn't be surprised at all if Forbidden West reaches or even succeeds Zero Dawn.

I am curious what PC sales numbers look like since the game has been on both Steam and EGS.

Since Sony is releasing more of their games on PC I assume it sold well enough.

With too many discounts, I wouldn't see it not goin 20 Mil. It's constantly on sale.

This is nonsensical. Just about every game except for Nintendo exclusives have frequent major sales and permanent price drops, yet only like 5% of games see this level of success. And that’s not even including the impressive feat of this being a new IP.

does that include the free downloads when they gave it away when everyone was in lockdown ?

No. They couldn’t call that sales.