Next Call Of Duty is a Cross-Gen Release, Still Planned for Q4 2021

The Xbox and Microsoft executive team in an E3 pre-brief discussed the future for Xbox. This included Head of Xbox Game Studios Matt Booty who revealed they are not done acquiring studios and plan to continue investing in its studios behind their tentpole franchises.

Xbox have been quickly growing its first-party lineup of studios with acquisitions and the opening of new studios starting in 2018 growing from just five first-party studios to 23.

The list of new studios and acquisitions include Bethesda parent company ZeniMax Media and its eight studios, The Initiative who is developing the new Perfect Dark game, Hellblade developer Ninaj Theory, Fallout: New Vegas developer Obsidian Entertainment, and many more.

"First and foremost, we are committed to building a diverse collection of studios that deliver a predictable pipeline of high-quality games," said Booty. "We’re committed to creating games that generate excitement, anticipation, and engagement with our fans, and we’re doing that in a few ways." 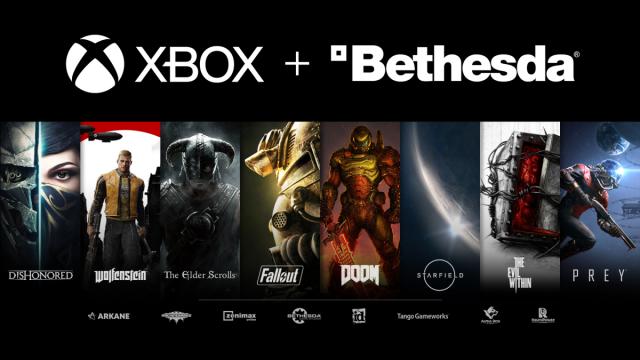 "First, we continue to invest in the studios behind our tentpole franchises," he added.

Tentpole franchises being Halo from 343 Industries, Forza from Turn 10 and Playground Games, Sea of Thieves from Rare, The Elder Scrolls from Bethesda, and many more.

"Second, we are growing our studios organisation through acquisition. We use a filter of 'people, teams and ideas' to keep us disciplined. People that we have relationships with, teams who have delivered games through both success and have seen some adversity, and studios that have a proven track record of new ideas."

He added the support from Microsoft has led Xbox to acquire smaller studios, as well as one of the biggest gaming companies in the industry like Bethesda.

"The support that we get from the company has enabled us to acquire smaller studios like Tim Schaefer’s Double Fine, mid-size studios like Obsidian, and of course, industry giants like Bethesda," he added.

"Finally, we work with independent studios to bring first-party exclusives to Xbox. Games like Ori and the Will of the Wisps from Moon Studios and Tell Me Why from Dontnod."

I was hoping that Bethesda was that "BIG" final purchase for Microsoft, because as great as it is that Xbox will finally have the first party titles that the brand has desperately needed for years now, you don't want to see too many independent studios just get gobbled up. Sure, the studios agreed to be acquired because Xbox allowed each studio to still act independently, just have more money available for development, you don't want to see a monopoly in gaming where only a few major companies hold most of the development studios.

monopoly only apply to the king of the video game industry.

If you can't beat them buy them and Microsoft has lots of cash, they could easily become the king of they want to. Getting a big enough market share to pretty much become the market and exploiting that position is the American way after all.

I just can’t believe that Sony hasn’t responded with their own acquisitions. They have >$43bil in cash and cash equivalents, so it’s not like they have insufficient funds to acquire studios. It certainly isn’t as much as MSFT’s $125bil in cash, but it’s still a hell of a lot! I mean, at least acquire Housemarque, Supergiant, Bluepoint, and From.

Yes buy more studios instead of crafting or refining ur own studios hahahaha!

what a time to be alive.

From a business perspective they should buy the studio's that hurt PlayStation most,to make them obsolete and claim their marketshare. Take 2, Sega and Capcom come to mind since Square doesn't want to be bought. Microsoft has basically infinite funds, so they could manage to do so

For all the streamlined marketing talk that comes from Phil Spencer or other people high up in the Xbox hierarchy, I really do believe them when they say that they don't see Sony or Nintendo as their main competitor. If you look at what they have lined up and what market they are targetting for the future, they don't care so much whether Sony sells 80, 100 or 150 million PS5's. They want to haul in gamepass subscriptions from a billion people who would never ever be in the market for buying a console or gaming pc. People which have a smart phone and don't consider themselves gamers but would get interested in this one game everybody talks about and then hear the way to play it is via the gamepass app. Just like you subscribe to Netflix for binge watching house of cards because everybody at work and all your friends talk about it- and then you remain a subscriber because the monthly rate is just low enough to not overly hurt you and because there might be other interesting stuff and even in the months you are not watching anything on it you keep the subscription because it is convenient. They have an infrastructure to be that convenient gaming thing on any device you own, and neither Nintendo or Sony can compete in that matter. Xbox was worried for Stadia and is worried for Amazon, because they could compete in that market, but console market share alone is nothing to keep the Xbox execs awake at night.

Gamepass hype will end soon. Once they realize people want to buy the games they want and not a subscription plan not knowing what games they will be getting.

“People”, apart from the niche that is hardcore Old School Collector Gamers, usually don’t care at all about owning games, they want to play them. In a convenient matter. I feel no hype at all about Netflix and until I open it and browse I have no idea what they have for me to watch. And sometimes I don’t open it in a month or two. But I know they usually have something for me and onde I want to watch something, I Can just open the app and Press play. And that’s why I have had that subscription for 8 years straight now. That is what Microsoft is after, and that is a market vastly bigger than what you can get by selling dedicated gamers consoles + games. They have the tech infrastructure and the money reserves to install this convenient solution for everybody, and that is why their true competitors are companies which do too: Amazon, Google - not Nintendo, not Sony.

I’d really appreciate if Microsoft could try and create their own stuff instead of buying other companies. These acquisitions just serve to decrease the competition. It’s horrible for everyone but Microsoft themselves. For example, in the film industry Disney has acquired so much power that they can (and do) force theatres to allocate a minimum percentage of screens to Disney movies, limiting the reach of competitors and (especially) indie movies. I don’t know what the equivalent of that would be for the gaming industry, but I don’t want to know either.

This has been how the industry works for decades. Nintendo and Sony have both purchased third-party studios and/or paid for exclusives or timed exclusives. It's just how things work. Also, I don't see it as stunting competition because it forces the other guys to do just that: compete. If one guy is buying things up, you either need to buy things up or create content to compete with that purchased IP. It only becomes anti-competitive when one company buys up so much that it kills all the others, but we're a ways away from that considering PS5 and Switch are winning quite easily at the moment. So over all, I don't mind any of this. As a matter of fact, I like it because it gives each console more of an identity. Nothing more boring than three consoles with the same third party games. At least in my opinion.

I don't disagree with the underlying premise here. But, in reality, there are thousands of game development studios, and hundreds of them in the AA and AAA space. MS just doesn't have anything approaching a monopoly. They could double their studio count from here and still not be there.

They need to go after some big name Japanese companies now.

Would prefer they spend their money on opening studios, creating new jobs and games.