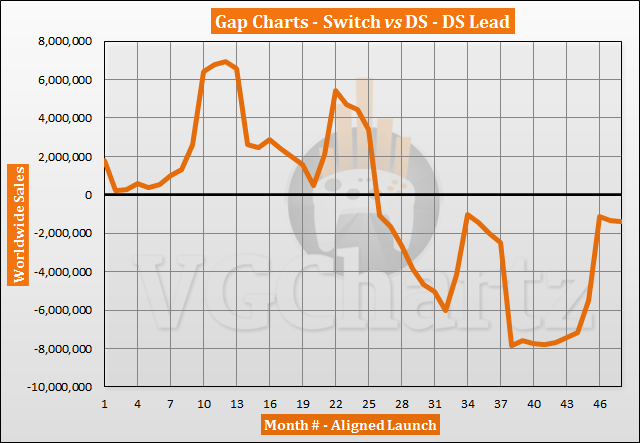 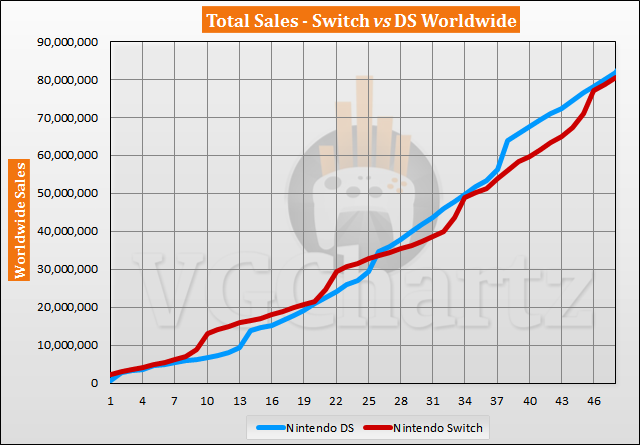 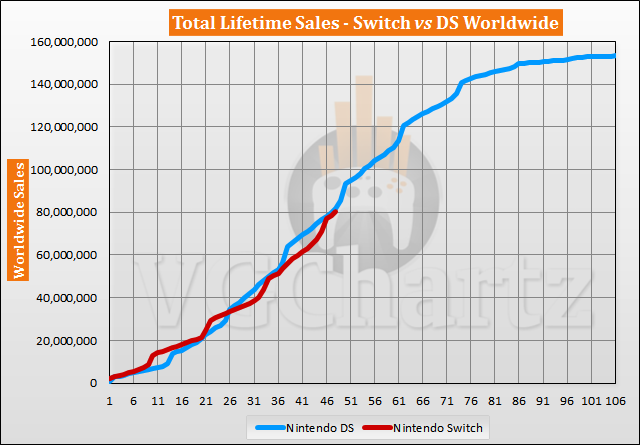 February 2021 is the 48th month that the Nintendo Switch has been available for. During the latest month, the gap grew in favor of the DS by 27,196 units when compared to the Switch during the same timeframe. In the last 12 months, the Switch has caught up to the DS by 664,027units. The DS is ahead of the Switch by 1.37 million units.

The 48th month on sale for the Nintendo Switch is February 2021, while for the DS it is October 2008. The Switch has sold 80.37 million units, while the DS sold 81.74 million units during the same timeframe.

Switch is catching up to big bois now

I don't know about that, the next one will be pretty huge as well. And even the one after that is strong by regular console standards, this is the DS after all.

More like three, though the next two are admittedly quite a but weaker. But those were still pretty great compared to other consoles.

Next year also is still ~30M and the year after ~20M, which are still very great years. But if the Switch manages to keep up with those, then it has a good shot at overtaking the DS, as it died quickly after that.

Yeah. Who would have even thought this conversation would be happening. The DS seemed untouchable and likely will keep its crown. But the switch definitely has a chance of beating it if there's no replacement for another 4 years or so.

At this point I'm starting to believe the Switch will at least catch up with the Ds, cause rest of world sales will be stronger and the main parts where systems sell should catch up and maybe even overtake.

And if the Switch can overcome the DS, it has a chance of beating the PS2, which was only a little ahead of DS. Unreal.

Yeah. If I had to pick between yes or no, I would say no. That said, it's possible. And even if not, it's going to be close.

Switch just barely passed the half game here .. it have to do almost the same amount of sales for the rest of it's lifetime to beat the DS.
This is just the beginning .. 2 more strong years left for the DS. and Switch I don't know ..
Оne thing is clear, the game is far from over.

Switch should be around last year in 2021 and sell another 28 ish millions. Knowing they want to keep it around for a couple more years, it can cleary do the remaining 45 millions in 3-4 years.

Yea exactly ! Knowing they are releasing a pro model in year 5 means the Switch should stay for atleast 7-8 years on the market.

Switch will stay probably 2 more years ..
The pro model is like the Pro on the PS4 just to extend it's life by 2 or 3 years at most. By 2024 Switch will be done. It will make probably 130M lifetime or something like this

Switch is in it's 5th year now, so 2 more years would be 7 years already.

130M is too low considering how well it's selling right now. Switch is on track to sell again close to 30M this year, bringing the total to over 100M already. From there, the Switch would need to crash way worse than the Wii did to come to a halt at ~130M

PS4 was the same story .. in 2018 PS4 was unstoppable, and see it year and a half later and it was pretty much done ..
as it was the Wii after its peak, as it was the DS, and many other consoles too.. always seems that the console have to do more, and than in a matter of year or 2 it goes from best selling to worse selling or mediocre selling at best.
You forgot that the last year switch made almost 30M because it had big numbers almost all year, switch this year had big numbers only 2 months now, with the next gen stock raising fast, and the pandemic boos from last year, switch will fall behind last year numbers making around 20 to 25M this year which would put it at around 98-100M with this year, something like 15M next year, and then decline to reach around 130M lifetime for the next 2-3 more years after that

I think you are remembering the sales of the PS4 in the last years wrongly due to it's weakness now after the PS5 launch.

Like I said, it would need a steeper cliff than the Wii did to only reach 130M.

I think the anticipation for the ps5 was what ate away at the ps4 sales. As long as they don't announce the replacement too far in advance, I think switch sales should at least be decent for another 2.5-3 years.

If any of those numbers are lower than actual, the switch could swing it. But this year is going to pretty much be the linchpin. And the replacement will have to wait until 2025.

Gap chart pattern indicates a re-test of the 6M lead for DS for an inverse head-and-shoulder pattern. Target after the re-test should be a 5M lead for Switch, probably after Switch's next holiday season.