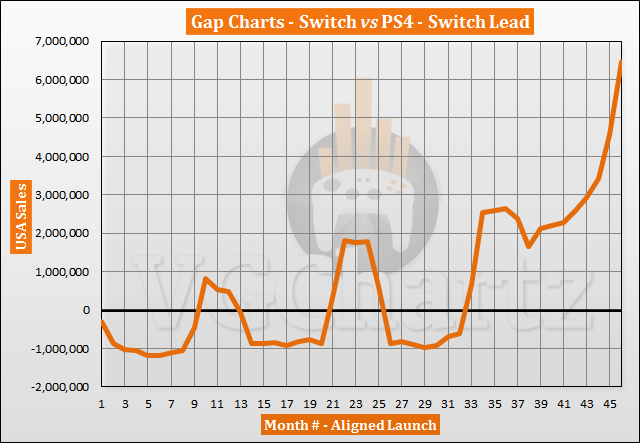 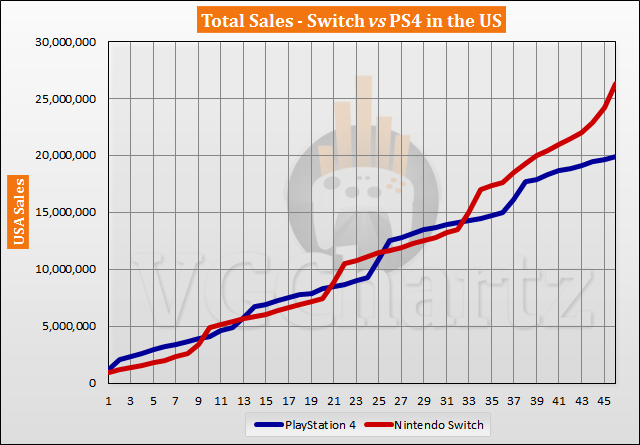 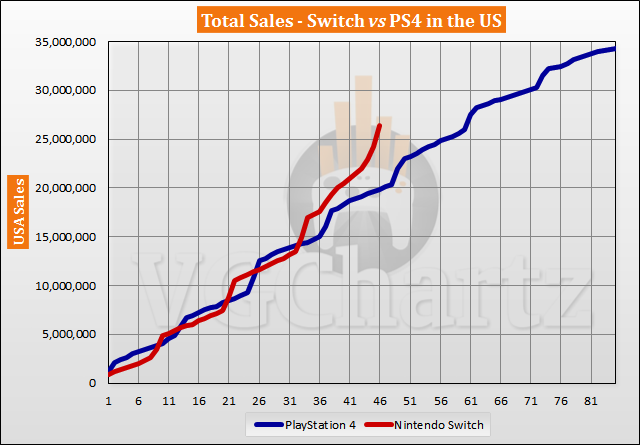 The 46th month on sale for the Switch is December 2020, while for the PS4 it is August 2017. The Switch has sold 26.34 million units, while the PS4 sold 19.86 million units during the same timeframe. The PS4 did not reach the current Switch sales until month 61 where it sold a total of 27.50 million units.

The PS4 has been available for 86 months in the US and has sold 34.55 million units. The Switch is currently 8.21 million units behind the lifetime sales of the PS4.

At the current pace, the Switch will not only be ahead of the PS4's holiday numbers, but the holiday after THAT as well!

There is no coming back

It seems plausible that the Switch will end up outselling the PS4 in the long run. Ten million units more for the hybrid seems an easy goal to reach, considering the Switch is still at full swing and it has a lot of life still left on it.

The more interesting comparison is going to be Europe: the strongest market for the PS4 and the general weakest for Nintendo systems. If I recall correctly, the PS4 is close to the 50m in Europe, while the Switch is slightly above 20m. The Switch's lifespan might help there, but selling +30m on their weakest market is quite a challenge. Only the Gameboy and the DS passed the 40m mark in Europe, and only the DS beat the 50m. I don't think it's going to beat the PS4 in Europe, but reaching GB numbers seems a more realistic goal.

Things could get better in Europe pretty fast. It's a more price-sensitive region for Nintendo, so price cuts are bound to give the Switch family a long tail in Europe. Although the way Switch has been selling, it's likely that we'll go yet again through a full year without any price cut coming. Still, exceeding 40m is a sure thing.

Asia, America and Other will be up Against Sony. Europe is only place will be down by 5-10M

I do wonder how much Nintendo's reluctance in making price cuts to the Switch is going to affect its sales in the second half of its life. After all, most handhelds benefit a lot from households getting multiple units, but with the Switch being quite pricey for a handheld (even the purely handheld version is above 200€) it could make families make do with a single device, especially because of the crisis.

They'll cut the price when sales are stagnating. Every other system had pretty aggressive price cuts when need be.

The switch will probably, eventually get a price cut. But it's unlikely this year. If they stretch it to 2024, I could see one next year. If the switch gets replaced in early 2023, they might just ride it out.

But given the comments the CEO has made and current sales, there won't be a successor until March or fall of 2024. So expect a price cut around the 5th anniversary.