Through the Darkest of Times (XOne) - Review

Fighting Hitler’s regime leads to typical results in games: playing clandestine infiltrators or honorable soldiers shooting their way past every Nazi.  But what is there to examine before war has broken out?  How do you challenge Germans before they tow the party line and they're still considered your friends?  Since you, and your colleagues, don't have the means or training to be the next BJ Blazkowicz, Through the Darkest of Times is about examining those less-sexy means of showing resistance throughout Hitler's reign.  With Paintbucket Games' measured understanding of the epoch, they refashion expected strategy mechanics to make a game that's more enriching and tangible under this historical context.

After deciding the sex, facial features, occupation, and political leanings of a protagonist, you assume the role of a resistance leader during The Third Reich.  The moment the ink has dried and Hitler has become chancellor (1933) you've assumed a special mantle: exposing him and his party's intentions.  Gathering up other lieutenants and supporters provides necessary benefits to keep going; you can control other officers to fulfill specific tasks, whereas supporters are stats on a screen that give weekly donations. 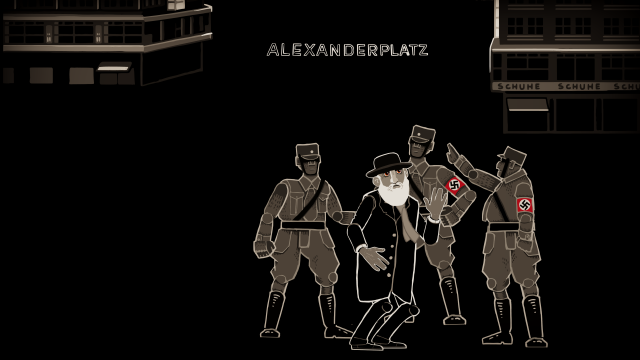 Times' strategy template has a very clinical & satisfying gameplay loop.  Each chapter, representing part of a year, is segmented into 20 weeks.  Each week effectively translates to one critical decision to be made with each team member: gather funds, paint anti-regime messages on walls, gather supporters, steal SS uniforms, and so on.  After the die has been cast, the game systems tabulate your results in the form of acquired funds, supporters, or tools, such as number of pamphlets or books that were printed.  Then, the loop resets with three disparate news snippets to read and perhaps a short talk with a team member.

As this continues, the constant fight with overall morale, your accumulative risk of being arrested, diminished funds, and more play off each other in engaging ways.  This isn't some "#resistance" nonsense of you making anti-authoritarian dances on TikTok; this resistance is one of people struggling to make ends meet and risking hard time for simply spreading anti-Nazi pamphlets—constantly looking over your shoulder all the while.  A simple dialogue decision with a teammate could result in them fleeing the country or becoming despondent and quitting.  This could hurt even more if that character had leveled up a few times and has improved secrecy stats compared to potential replacements.  Interspersed with these decisions are story-driven moments of your character witnessing the slow changes of people and places that once felt comforting.  This context further sells your place as a manager of an anti-regime small-business owner, in a strange way.

For all the great work in showing the stakes, Paintbucket Games fumbles on some interlocking strategy systems.  For starters, it's quite limited in disseminating specific information.  The tutorials don't go all the way in clarifying every item’s importance; more so than that, some tasks are locked behind set requirements (*x number of pamphlets*) that just seem arbitrary.  Occasionally, decision-making prompts halt a developing mission and you're given a three-pronged choice: flee, hide, or enforce.  What could've been an interesting game of chance always boiled down to me pursuing the task regardless, since the risks rarely felt tangible to even consider. 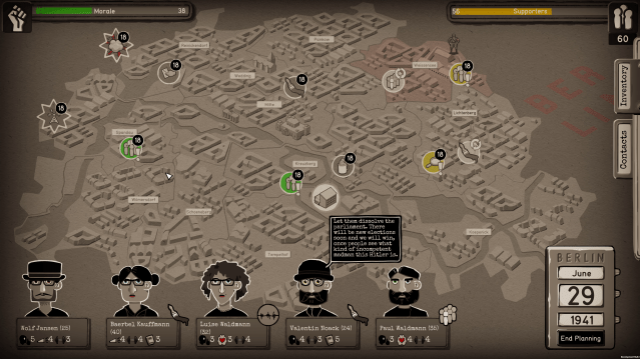 How risk/reward is managed during the strategy sim portions can feel a bit lopsided, for good and ill.  I do like the concept of buttering up your perspective audience based on your work life & political ideology.  For example: it's neat to net more marks (German currency) from a church group if you're a Catholic Monarchist or perhaps a Social Democrat/Steel Worker.  Conversely, adding specific items like a bicycle to a mission nets the smallest of decreases in your risk meter.  The rules are flimsy as to why adding intel just nets a huge jump in risk, but not in reward.  Wouldn't pamphlets or intel help boost the amount in donations?  The cracks in this resistance-strategy foundation start to show when the game stifles this kind of creativity.

Despite being more 'functional' than 'great', there's still a lot to appreciate in this template.  The pacing and increased stakes from low-time pamphleteering to assisting Jews to escape with bogus passports feels so palpable. Times has a way of selling you on the importance of planning and executing decisions without straining it beyond belief.  As the desperation increases more and more from 1933 to 1945 so too does the bravery of your potential actions.

That may be what carries the gameplay for me: the historical context.  I think Paintbucket Games being based in Berlin helped in capturing the bleak mood surrounding the strictly-objective game systems (like Velvet Assassin did with stealth back then).  Since you can never complete every task-bubble smattered across Berlin in 20 turns, every chapter completion can never feel like more than a Pyrrhic victory.  You've dealt with all these near-misses, scrapes, potentially killed friends, witnessed vicious atrocities, and more, all to feel some satisfaction of making your own dent against impossible odds.  The team's dedication to this detailed history incorporates the game's story through gameplay. 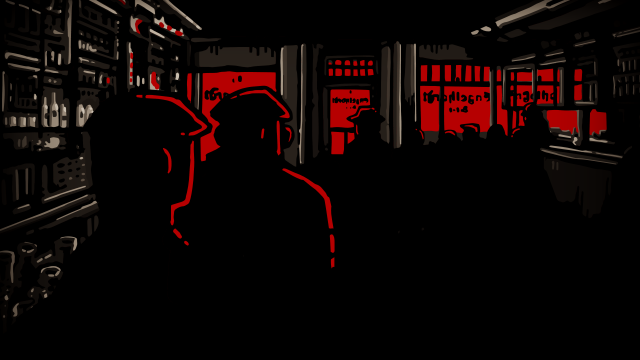 Although not perfect, the writing in general really works.  Despite not plunging hand-over-first into all of Germany's history, I came away with a better understanding of the diverse players in Berlin.  I've known the stats of the Nazi's non-majority approval ratings before, but Times captures what that means when I'm making dialogue options with a communist, trade-unionist, and a Protestant preacher on the south side—all in one week.  A lot of world-building intricacies make this feel as fleshed-out as a great sci-fi series.

For all of this work, along with sneaking in a few "Make Germany Great Again!" allusions, part of me is suspicious about them skimming over the Molotov-Ribbentrop Pact (at least in my playthrough).  I mean... 1939 is one of the years you experience, so what gives?  To not indulge in the point for too long, I suspect this "convenient editorializing" stems from some kind of implicit bias.  The willingness to provide history about Hungary’s position in the war but skirt around specific details with Poland just seems fishy to me.

Regardless of these historical complaints, the majority of political dynamics and history included for its runtime are absolutely well-considered. 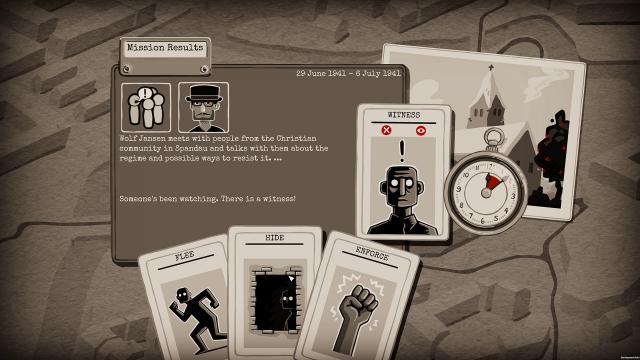 On top of the succinct balance between storytelling & gameplay, Times makes a name for itself with its visual & sound design.  Its art style is trying to copy that of Weimar art of the same period.  If I'm presuming that to be the case, Weimar art… isn't my favorite.  There are nice touches in bringing out the bleakness of this world, and yet, little things like the exaggerated eyes & facial proportions look a bit silly.  The disparity between good Germans and Nazis/Nazi sympathizers' eye size or general countenance is a nice touch though.  It does a better job in selling a setting, especially so with its atmospheric framing.

Since there's a lot of reading without supplementary voiceovers, soundtrack and sound foley are heavily emphasized to capture the dour mood.  The old-timey radio jingles, typewriter clacking, and so on feel period-accurate.  A tremendous amount of work went into bringing the resistance to life through its soundscape.  The obvious limitations indie studios tend to have can be seen with Times, but it's nevertheless still good. 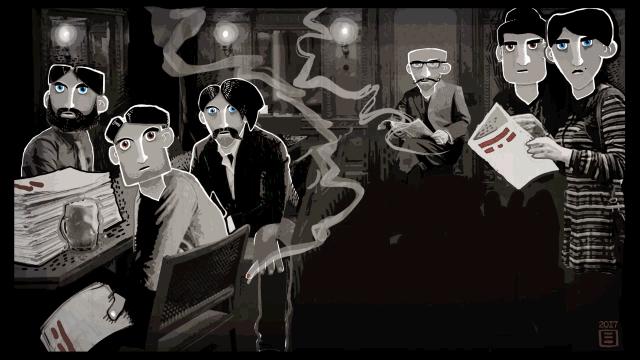 After eight or nine hours exploring Berlin through the lens of a resistance member, Through the Darkest of Times succeeds by incorporating vivid history into each of your strategic moves.  Taking on the 20th century's most popular regime feels more daunting without a Thompson by your side, just as Paintbucket Games intended.  The moody art style and uncompromising writing lend moments of small resistance tremendous weight as a result.  All of these elements on top of what's otherwise a perfunctory strategy sim make it easy to recommend you sign up.  Not all fights against Hitler have to be marked with wanton destruction to be significant.

This review is based on a digital copy of Through the Darkest of Times for the XOne, provided by the publisher.

They should make a Nintendo Switch port for this game

@coolbeans Thank you for letting me know. Once I can re-purchase a better Switch I'll certainly check this game out