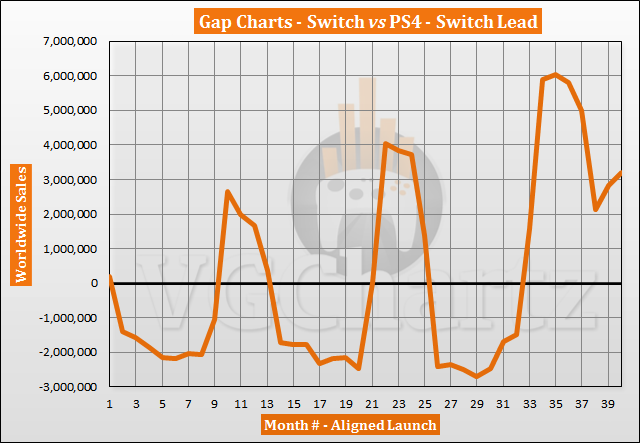 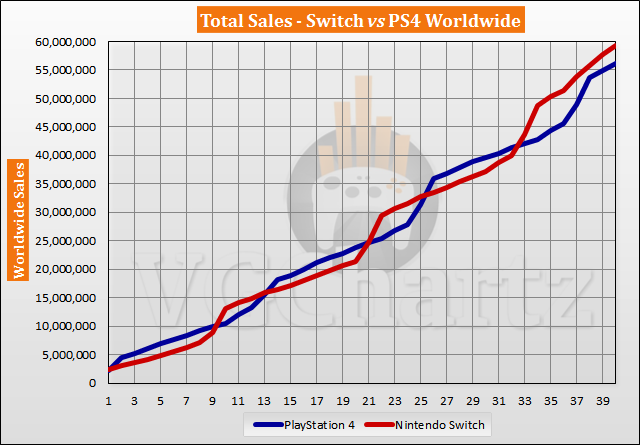 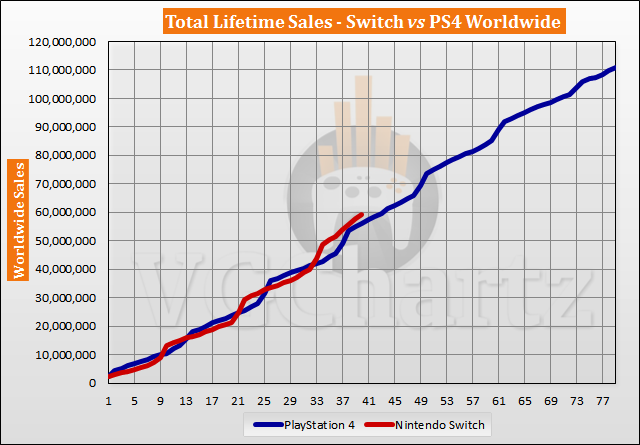 Looks like by this holiday season switch lead will be the highest is ever been.

I recall seeing an image giving reasons why the Switch will bomb... Wish I could find that image.

Just reading through early Switch predictions, which for the most part expected Wii U like sales at a 300 dollar/Euro pricepoint (most expected more like N64 or XBO sales at a cheaper price) is already hilarious enough in hindsight.

Pretty impressive to see how close the lines have been for over 3 years now on the last graph. No matter what happens both consoles will be one of the best selling of all time and that's good to see happen back to back like this. Video gaming industry is as healthy as ever.

Damn switch is 3 months ahead and expanding the lead. I think it will continue to expand the lead all throughout this year. I hope Nintendo produces crazy amounts of switches so it can have a crazy year

It's quite impressive. I am somewhat cautious about whether it will keep it's lead and go all the way onto beating PS4 in the end but I guess we'll see.

I don't believe Mario Paper is enough to keep things this way.

What about Paper Mario?

I think stock shortages are more relevant than software releases at this point. If the hardware needed software to push it and get people excited I would agree. Paper Mario is more about taking care of existing customers and fans of the series (and to make millions of dollars in software sales, of course). As of this moment you still can't walk into the store to buy a Switch and I don't see it being likely that you'll be able to until at least September.

The games available right now are enough for the switch to be sold out even with increased production and record matching or record breaking sales month after month. As long as Ninty can make them, switch SKUs will sell. If Ninty can make 27mil, switch will sell 27mil. I don't know about 30mil but even that's possible

And this is with 4 holidays seasons for PS4 versus 3 for Switch.

Still, I do worry if Switch can keep up this pace in the long term with its software schedule already looking like a system on its last legs.

Looking like a system on its last legs?? That's a weird thing to say. There's loads of Nintendo first party franchises that haven't even come out yet, not to mention undoubtedly second rounds of some games. And of course third party releases are finally starting to pick up more this year. Switch is currently a system looking like its on its mid-legs, which is exactly where it is in the lifecycle. The next couple years should include games like BotW2, another 3D Mario, 2D Mario, Pikmin, another Pokemon, more Ring Fit, another Mario Party, Metroid Prime plus maybe a 2D Metroid as well, maybe a Mario Collection, Bayonetta...hell that alone would be a jam packed two years of 5-20 million sellers, and that's not to mention probably a few old ports that will sell millions like Metroid Prime trilogy, a zelda port, maybe Mario 3D world. Actually all those games will probably be spread out over the next 3 years which would leave time for one more major game before the next gen, with numerous more franchises that have yet to hit the Switch also sandwiched in there.

Systems have weaker years. Let's atleast wait till after the direct