Publisher and developer CD Projekt in their latest Management Board Report for the year 2019 released charts for the sales figures of the open-world action RPG, The Witcher 3: Wild Hunt.

When you look at the charts and count the pixels we can get a rough idea of how well the game has sold. When you combine all the years sales for the game are around 28.2 million units. 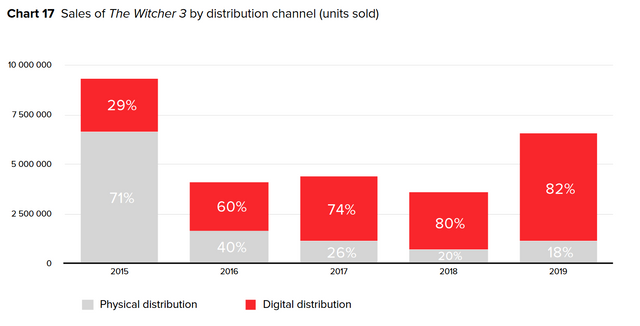 The first chart (above) about the game provides the breakdown in physical and digital sales. Its launch year in 2015 would be the only year physical sales would be the majority of units sold. In 2015, physical sales accounted for 71 percent of units sold. In 2016, digital sales accounted for 60 percent of the sales, 2017 for 74 percent, 2018 for 80 percent, and 2019 for 82 percent. 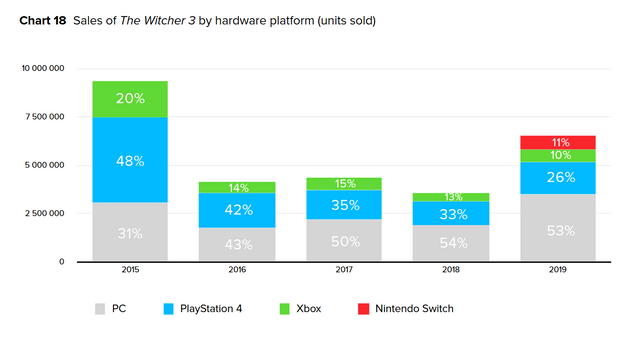 In the second chart (above) the Windows PC version was the best-selling version in every year, except for the launch year in 2015. Sales in 2019 were the second highest for the game thanks in part to the success of The Witcher Netflix series. Despite launching on October 15, 2019, the Nintendo Switch version accounted for 11 percent of the game's sales in 2019. 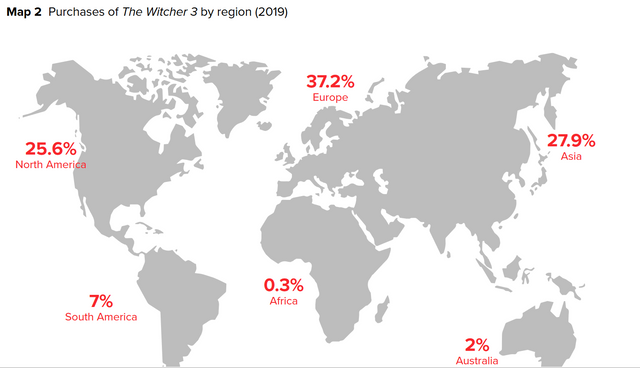 The Witcher 3: Wild Hunt is available now for the Nintendo Switch, PlayStation 4, Xbox One, and Windows PC.

700,000 units on Switch is pretty good for a 4 year old game against Nintendo's highest selling 1st Party Games. This hopefully might mean we'll get more Switch support from CD Projekt Red and other 3rd Party developers

Maybe but i doubt the switch could handle anymore games from cdpr,especially cyberpunk

Not to mention this port was made by Saber Interactive and not CD Project. Saber was also just purchased for over 300 million about 2 months ago so the chances of anymore Switch ports from them is pretty slim. Regardless, Cyberpunk 2077 is definitely not getting ported anytime soon.

I don't know if I would consider Witcher sales on Switch competing "against" Nintendo's IP. I'd say it compliments it and helps round out the offering. I'm glad for CDPR that they are seeing support from the Switch crowd for their efforts. It is impressive that an older game can find new life through a new platform and from TV.

Long tail sales prevail. I still remember when I was told PS4 was the better selling version, and that nothing would surpass it, well look at how times change.

It makes sense when the game is a frequent visitor to the heavy discount list especially on Steam, but still congrats to CDPR

It's also been noted by Era, that PS4 and Xbox have also seen the same deep and regular discounts around the same times as well. PC just has really long legs.

Yeah, Witcher 3 is priced fairly for its age unlike a lot of digital titles. I think I paid $15 for the whole series on GoG last summer. Money well spent!

I also forgot to mention. Sales made on GoG are 100% profits for CDPR, as they operate under CDP, which owns and runs GoG. Even with those discounts, CDPR will have earned 100% of them via GoG, and at least 70% on Steam.

I contributed to that number.

Nice to see a company provide such a thorough breakdown of sales.

One of the best games ever made!

I wonder if Switch release helped boost sales for other platforms.

Well look at it: a major boost compared to previous year without a Switch version.

I just think the Switch users wanted the game, and when it came out, they bought it on that system. I do feel like the TV show boosted sales all around, but I wouldn't contribute any sales improvements on all devices, to a new device, as if users not using the Switch, were somehow inspired to buy on their own systems. I know I do not feel such inspiration to do such a thing.

Yes, the show too! Forgot about that... Still, the announcement of the game coming to Switch helped boost attention to the game. Surely some out there heard of the Switch release, gained an interest, and bought it on another platform.

I'd be inclined to think that all the hubub on the web over the Switch port would have to raise some new interest that got directed at other versions.

Sadly, I'm one of those who also bought into the game because of the show (good thing I only paid like $17 for it)...have played it for a few hours and haven't touched it since. Maybe I'll get back into it maybe I won't. Not my kind of game....can only play for shorts amount of time because it barely can hold my interest.

EA appears determined to die on that particular hill.